Screening: Google and the World Brain

Spurred on by Google’s hypocritical refusal to talk about a project whose stated aim was to make knowledge available for all, the documentary charts the  project’s early implementation in select American universities, its spread across the Atlantic and the growing hostility it garnered – culminating in Google being sued and the ensuing court case.

The title of the documentary is a direct reference to H.G Wells’ concept of an all knowing world brain, and his ideas feature regularly throughout, providing both the opening and closing sequences.

One argument raised in the documentary is about the project’s overwhelming focus on English language books. Yet Lewis, at least, is not guilty of a similar English interviewee bias, with authors and librarians from China, Japan, Germany and Spain all featuring heavily, and the former director of the French National Library inadvertently providing the film’s comic moments.

The film highlights the ideological differences between Google, authors and librarians. As Lewis noted, while authors and Google aim to make money from books, “a librarian’s role is to give this away to everyone for free.” This naivety comes across clearly – especially the Harvard University Library Director – who seemed to believe in Google’s benevolence and had little knowledge of copyright law. 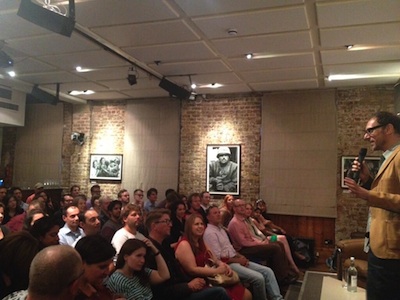 The question of copyright features heavily throughout the second half of the documentary and it was the first topic of the lively and humorous Q&A session that followed the screening. When asked about why he made a documentary about copyright, Lewis answered that:

“I initially wanted to make a film called ‘Copy Wrong’ [but] no one really has much sympathy for musicians . . . so I latched onto books, as we know it takes an enormous amount of work and I thought people would sympathise with authors who were having their work taken out of their hands”

Asked what he thought was going through Google’s mind when planning the project, Lewis responded:

“It’s old fashioned vanity really . . . they think they are doing a lot of good for the world – and making a lot of money out of it – and in their own minds they feel they are worth the money they earn, as it’s for the good of the world. Which is not so different from me – I’m just not worth $150 billion.”

Did Lewis believe the internet had been good for libraries?

“I think the internet can be wonderful for libraries . . . the internet by definition is a library . . . but certain taboos, such a charging micro-payments for taking out books, will need to be broken in the future if libraries are to continue.”

Is there a right way for Google to do the project?

“It’s easy. Ring up the publishers and ask for permission”

And Google’s opinion of the documentary?

“They wrote me a letter saying they were disappointed by the overwhelming negative tone of the film.”

Not that that seemed to concern Lewis, who suggested his next documentary might investigate Google further, premised on the  “mythologies that Silicon Valley have of their own effectiveness.”

A DVD is in the works, and to find out more information visit benlewis.tv. Or, by his own admission, “just google me”.

More information about the film can be found here – http://www.worldbrainthefilm.com/