Scrap collectors and the crisis 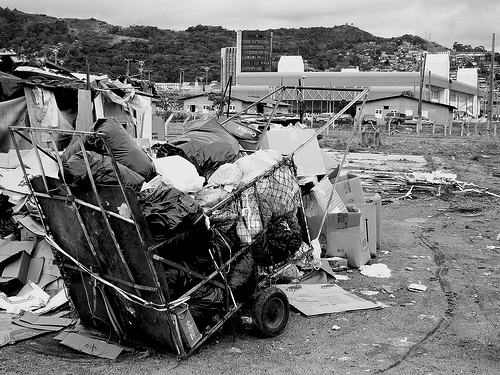 The current financial crisis has found its way to unimaginable places. While most Brazilians remain optimistic – after all the crisis was created far, far away from here by economies much more dependant on the financial markets – the fact is that it has brought consequences to many people who don’t even know what the financial market is and who have never heard of subprime mortgages and foreclosures (and never will).

The man who told me their story is not an economist, or a journalist. He is João Câmara, a cab driver who drove me home some days ago. He started by complaining that he did not know his way around: he’d been out of the taxi business for 15 years. What had happened, I asked. I had opened my own business, he replied.

He ran a centre for selection of recyclable materials in São Paulo. Scrap collectors would come with their wooden carts and sell the stuff they’d gathered – paper, plastic bottles, aluminium cans – to be cleaned, selected and then sold to major recycling companies. In other words, he was a middleman.

In Brazil, 90% of the materials recycled go though the hands of a scrap collector. It’s hard to know precisely how many they are. Figures vary between 800,000 and 1.5 million. These are workers who walk around all day going from trash can to trash can to collect, organize and clean everything that no-one wants anymore. And they have been deeply affected by the crisis.

João Câmara told me that prices of used plastic slumped so much he had to give up his job and go back to being a cab driver. Many scrap collectors are seeing their earning cut by almost half, he said.

He is right. According to the National Movement of Recyclable Materials Collectors, collectors who used to earn up to 350 dollars per month are now unable to make more than 200 dollars. Prices paid for the materials have dropped by 60% in some cases. In September 2008, a kilo of cardboard was about 0.22 dollars. Now the price is 0.06 dollars. The price of plastic fell from 0.50 dollars to 0.30 dollars.

Being a middleman, João Câmara had the opportunity to drop the industry and go cab driving. He’s starting anew, and faces the future in a very Brazilian way. What can one do, he said, that’s life. But for most scrap collectors, there is no other choice – they will have to work harder, maybe twice as much as they did before, to afford food for their tables. Figure if the US financiers ever thought of that.