Salma Said: “I witnessed a war and survived it” 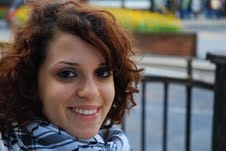 Salma Said, blogger will be taking part in our event this coming Thursday Protest, technology and the end of fear.  Born in 1985 in Cairo, to a political family she has been involved in political activism since the age of 15 and joined the Kefaya (Enough) movement in 2005 when she discovered the Egyptian blogosphere. Here she writes about her experiences during the revolution in Egypt, the importance of social media and the challenges ahead.

I witnessed a war and survived it.

On the morning after the Bloody Wednesday of 2 Feb I  realised that we were alive and that all these attempts to literally kill us did not work, thanks to everyone who defended and saved us. I also saw a degree of devotion and sacrifice I thought I’d never witness in my life.

I believe all efforts to fight injustice in Egypt have led to what we are witnessing today.

I was born in a family of activists, both my parents and my grandparents have been part of the "leftist/communist" movement and I started participating in activities when I was school during the second Palestinian intifada.  Then was the war on Iraq and shortly after the rise of Kifaya movement in 2005, which I joined. Kifaya was the umbrella of another group called "youth for change" which was more radical and active, and I worked with them until 2007.

During the Kifaya time blogs were a new thing in Egypt and I was part of what was then the new "Egyptian blogosphere”. Since the end of 2007 I have not been part of an organised group but I took part in campaigns and worked with people on specific cases, the latest was a campaign for "fair minimum wage" in Egypt.

The free uncensored space called the internet allowed so many young Egyptians to write what they really think about the world, organise campaigns, meet and discuss important things, at the same time the traditional media, although promoted as free and daring, had no space for this. Most of the people who I consider my friends for life and comrades I have got to know through blogs and through reading their work.

I use Facebook :), twitter, rise up, delicious , blogs, everything. The internet and media tools have a GREAT role but I also have to criticise the over-focus on social network’s role during this revolution. Although we used Facebook to spread the word about the first day of protests, this revolution was not only made by internet users and their class and it could have never been without it being really a popular revolution.

I remember seeing a middle age woman from Imbaba, a very poor neighbourhood in Cairo, who on 28 January stood on her balcony and used a water hose to put down the tear gas bombs that were being thrown at us. I will never forget these people and these scenes – they are the MAIN thing that made this revolution "succeed". Everyone did the best they can and everyone was one.

The immediate challenge is to get rid of the army

They are now as oppressive an inhumane as the old regime (because they are the old regime). They arrest and torture activists, send them to military tribunals and my first goal now it to end this. This revolution started for human dignity and we can’t allow this type of violations anymore.

The biggest challenge ahead is to get organised

Even though the great thing about this revolution is that it was spontaneous, with no leader, we are now paying the price of these things. The regime hasn’t fallen yet, the influence of the 30 years of poverty, ignorance and mistrust in the opposition are showing and we have to prove something else. We have at least two years ahead of us of continuous work.

Book tickets to our special event Protest, technology and the end of fear in association with BBC Arabic here.