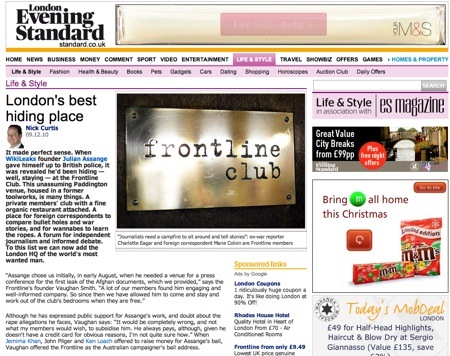 When it emerged in court that WikiLeaks founder Julian Assange had been staying at the Frontline Club in recent months, the media around the world turned its attention turned to the Club.

Here’s a round up of just some of the coverage from around the world:

This unassuming Paddington venue, housed in a former toolworks, is many things. A private members’ club with a fine organic restaurant attached. A place for foreign correspondents to compare bullet holes and war stories, and for wannabes to learn the ropes. A forum for independent journalism and informed debate. To this list we can now add the London HQ of the world’s most wanted man.

Wikileaks founder Julian Assange was based at London journalists club In Australia’s Herald Sun Vaughan Smith is quoted explaining the decision to allow Julian Assange to stay at the Club:

He came to us," explained the club founder. "Essentially because we are independent … he felt it would be a reasonably safe place for him to operate out of.

It was also somewhere he could access journalists and speak to them.

The Frontline Club in London is the kind of place where war correspondents and investigative reporters mingle with admirers and wannabes, fired by a shared passion for exposing government spin, revealing the truth — and fine dining.

So when WikiLeaks founder Julian Assange found himself at the center of an international firestorm over the website’s publication of leaked US diplomatic cables, he knew where he would be well-fed and, more importantly, safe.

Germany’s Bild in HIER hat er sich der Wikileaks-Chef versteckt (this is where the Wikileaks boss has been hiding) included embedded video of a recent First Wednesday talk- includes a detailed description of the Club and its activities in German and a slide show of great pictures of the Club.
In China’s Global Times in Australia blames US over WikiLeaks Vaughan Smith is again quoted explaining his concerns about the charges against Julian Assange.

I am suspicious of the personal charges that have been made against Assange and hope that this will be properly resolved by the courts. Certainly no credible charges have been brought regarding the leaking of the information itself.

Wikileaks salaries to be revealed in new report Wired reported on comments made by Kristinn Hrafnsson at a panel discussion earlier this month that expenses and salary earnings for paid WikiLeaks staff will be revealed for the first time in a report expected to be published by the end of this year,

Hrafnsson speaking Wednesday in London on a panel discussion at the Frontline Club, said that the Wau Holland Foundation — the Berlin-based non-profit that handles most of the money donated to WikiLeaks — will finally be detailing how WikiLeaks has spent funds from the more than $1 million it has raised in the last year.