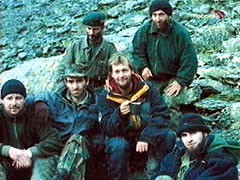 The Nidderdale Herald reports on the Nidderdale Book Festival, held on a farm in Summerbridge to help raise funds for the Roddy Scott Foundation. Kate Adie was among those present and she talked about her passion for reporting on war in a correct manner,

“We all think that reporting a war correctly is important and we all feel quite passionately about it,â€ [she said].
Roddyâ€™s parents, Robin and Stina, said the weekend had been a great success and was the longest event the foundation had ever seen. Mrs Scott said: â€œWeâ€™ve never had more than a couple of hours before. Itâ€™s very significant and with a lot of very well known people speaking, so we have been fortunate.â€
One of the most popular events was a discussion on the history of war reporting. Hosted by David Loyn, who is also a trustee of the Roddy Scott Foundation, the debate was held in the barn and featured Kate Adie, Sandy Gall, Damien Lewis and Saul David. link

Roddy was one of the original members of the Frontline TV agency. He was killed in Chechnya in 2002.