Robert King: The Angola 3 and their fight for justice 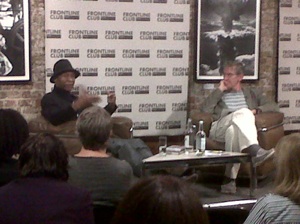 Robert King was freed in 2001 after spending 29 years in solitary confinement in Louisiana state penitentiary ‘Angola prison’. Convicted for the murder of a prison guard, his trial was fraught with inconsistent evidence and clouded by the racism of the Deep South.

Clive Stafford Smith, founder and director of Reprieve spoke to King about growing up in Louisiana, solitary confinement in Angola prison and the importance of supporting prisoners with little recourse to justice.

‘I saw racism in the raw’ King told us leaning back in his armchair, black brimmed hat placed low on his head. ‘But we found ways to show our dissent.’

‘As kids, we used to take this (coloured people) sign and put it all the way up to the front of the bus, and the white people wouldn’t go beyond that sign. […] Whites would get on the bus and they would not sit behind (it)!’

There was only one black member of the jury when King was sentenced for murder. He is scathing about justice in the US judicial system.

‘Legality and morality, especially in the courtroom; they don’t meet.’

A member of the Black Panther Party at the time, King was considered a threat and placed in solitary confinement.

Yet he saw himself as being ‘more than an organisation […] I saw myself as a person who had really joined the struggle. The prison recognised this.’

‘You’re in the cell for 23 hours a day, sometimes 24 […] It did not make any difference if it was Monday or Sunday, if it was Easter or Christmas, you know it’s still the same day for me […] One day followed the next.’

Politically tuned-in, King turned to the courts and succeeded in limiting the gratuitous, humiliating process of cavity searches. Fighting injustice on the inside was a lifeline in itself.

‘We did some things in prison to kind of […] bring things along. We consoled ourselves with the fact that we were able to help ourselves and that we had people on the outside who were also willing’.

Support from the outside remains crucial to people on death row.

‘I’ve seen a letter save the lives of a lot of people […] a letter from a loved one has probably stopped them from committing suicide.’

Since his release in 2001 Robert King has focused on helping the remaining two of the Angola 3, Herman Woodfox and Albert Wallace, to gain their freedom. A civil suit that will soon go to trial aims to set a precedent that would outlaw long sentences for solitary confinement.

Sceptical of any success in the US Supreme Court, Clive Stafford Smith points out that seeking out international support may well be the best way forward.

‘I am so angry! But I’m not speechless’

He may be angry, but Robert King has a powerful voice. His book ‘From the Bottom of the Heap: the Autobiography of Black Panther Robert Hillary King’ is out now.