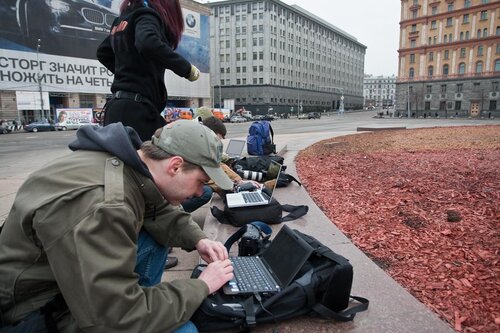 Two female suicide bombers were believed to be responsible for the deaths of 38 commuters in Moscow at rush hour this morning. Russian officials say that 60 people were also injured in the attacks at Lubyanka and Park Kultury Metro stations. There are more details here and elsewhere. Below I’ve put together several links relevant to the coverage of the attacks.
Collections of material
As usual, Global Voices provides an excellent starting point. Their coverage includes several translated eyewitness accounts and links to blogs. According to Global Voices this post chronicles black outs on news media websites.
New York Times Lede blog is also worth a look and has several videos. There is a Russia Today interview with their own presenter Yulia Shapovalova. She was caught up in the attacks and shot mobile phone footage at Park Kultury station. Reactions to the bombings on Russian language blogs are recorded by the NYT here.
Liveblogs
The Guardian. Closed the blog near to 7pm Russian time.
The BBC. Seemed to be running up to an hour behind in the afternoon. Interestingly included this observation on its own reporting from a journalist based in Moscow:

"1410
nataliaantonova tweets from Moscow:"Um, no @BBC & sources, #Moscow is not ‘a mess’. I live in the center, and my part of the city is getting along fine."

The Times
Twitter
1. Several tweeters felt that the site was more helpful than the Russian media. One Twitterer based in Moscow noted that there was a notable lack of coverage of the incident on television:

"Amazing how TV not showing ANYTHING. Soap operas, nature shows, etc since this morning, with just the random update here + there #metro29"

2. A few were not pleased by the use of the word ‘rebels’ by CNN and the BBC in their reports.
3. A link to a screenshot of what I believe is a fake social networking profile was also retweeted several times. I couldn’t translate the Russian (maybe you can help!) to understand what all the fuss was about but it seemed to be discredited in various places so I wasn’t too concerned about not following it up any further.
4. Russian Prime Minister Dmitri Medvedev (or his media team) was using his Twitter account.
Video
By far the most disturbing video I came across was this one taken by somebody evacuating Park Kultury station. It shows bodies and personal belongings lying on the platform as other passengers hurry to leave the scene. I found it via a search on Twitterfall but it was also used by France 24 and appeared on at least a couple of Russian Livejournal blogs.
Russia Today’s Youtube channel is a good place to access other videos. They are ‘favouriting’ amateur footage.
Websites
Metro 29 was set up to provide phone numbers and information for victims and their families.