Arjan Hehenkamp, General Director for the Dutch section of Medecins Sans Frontieres (MSF), addressed the difficult choices his organisation had to make after the earthquake struck. He explained why MSF chose to address the massive surgical needs in the country at the expense of investing in water sanitation and shelter:

“We chose to save the lives of those who were most seriously affected by the earthquake. . . . We were banking on the fact that with such a massive mobilization of international solidarity and capacity, others would be able to take the other responsibilities [of water sanitation and reconstruction] upon themselves. And that didn’t happen.”

Hehenkamp criticised the United Nation’s work methods and its “unhealthy obsession with coordination” which he believes made the situation more chaotic for the aid organisations involved in Haiti.

Reporter and author Jonathan Katz, who was one of few Western journalists to be in Haiti when the earthquake struck, observed that it would be more effective in the future to have a trained and competent core on the ground in Haiti. This would help the general population rebuild their lives themselves when disaster strikes, instead of alienating them in the process:

“It was a failure of foreigners to recognize how people were conducting their own lives and figure out ways to support them in the ways that they actually want to be supported. . . . You have this disconnect, all this money that’s being spent and going around in circles with aid groups. They are doing their own thing but it’s not creating anything lasting, and it’s continuing to weeken the government by going around it instead of going through it.”

Gilmore screened a video clip that he made for Channel 4 News, demonstrating the impact of the recent Hurricane Sandy in Haiti and the continuing spread of cholera since the earthquake of 2010. Victims of the disease in Haiti are currently threatening to sue the UN, accusing them of negligently allowing peacekeepers infected with cholera to pollute Haiti’s water after the earthquake. The panel underlined the urgent need for building effective water sanitation systems in the country.

An audience member asked the panel if civil society groups in Haiti were being consulted for the rebuilding process.

Andy Leak, secretary of the Haiti Support Group and editor for the quarterly Haiti Briefing had just returned from a trip to the country. He named several local groups that have knowledge of the population’s needs and that are being ignored by aid organisations.

“Nobody wants to listen to these peoples voices because they are not giving messages that the deciders want to hear.” 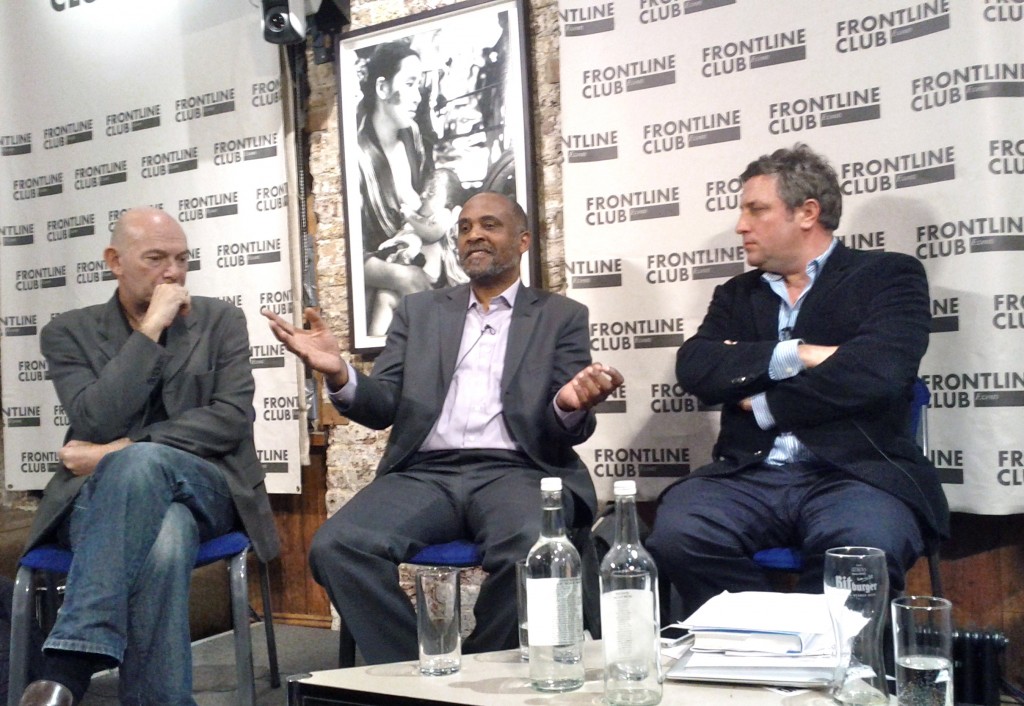 Another audience member brought up racism as the reason she believes Haitians are being bypassed in their country’s reconstruction process and disregarded by international organisations.

The discussion ended on the poignant response of Mario Gousse, a Haitian-born science teacher based in the UK and member of the Haiti Support Group Executive Committee:

“Let’s be clear that Haitians experience the UN as a military occupation. The UN literally defecates on Haiti and kills people (with cholera) and when it’s presented to them, they say ‘we’re not entertaining this case’. . . . The Haitian people are being kept by the UN from doing what they need to do – which is to govern themselves – which Haiti has shown that it can do. So if we look at all the miserable people, it’s artificially installed, it is not the natural state of Haitians.”

You can watch the event or listen to the podcast below.