He described Morris as “. . . undoubtably one of the most knowledgeable people in the field. . . . We didn’t know until about a couple of years ago that John not only could speak about photography but he had been a photographer himself for a very short period of time.”

The compelling photographs chosen from the book, illustrated French citizens, troops and the effects of World War II in Normandy. Servicemen were forbidden to disclose where in France they were writing from, hence the title Quelque Part En France, or Somewhere in France.

The 168 photographs that Morris took, were “images that are so very different to those of war photographers . . . who were more concerned about the action”, said Pledge. “John saw things and registered things that most photographers did not.”

The pictures show “little everyday scenes in the French countryside and small towns”. And in his capturing of them he was “a very fine, subtle observer of war in a dramatic environment”, said Pledge. 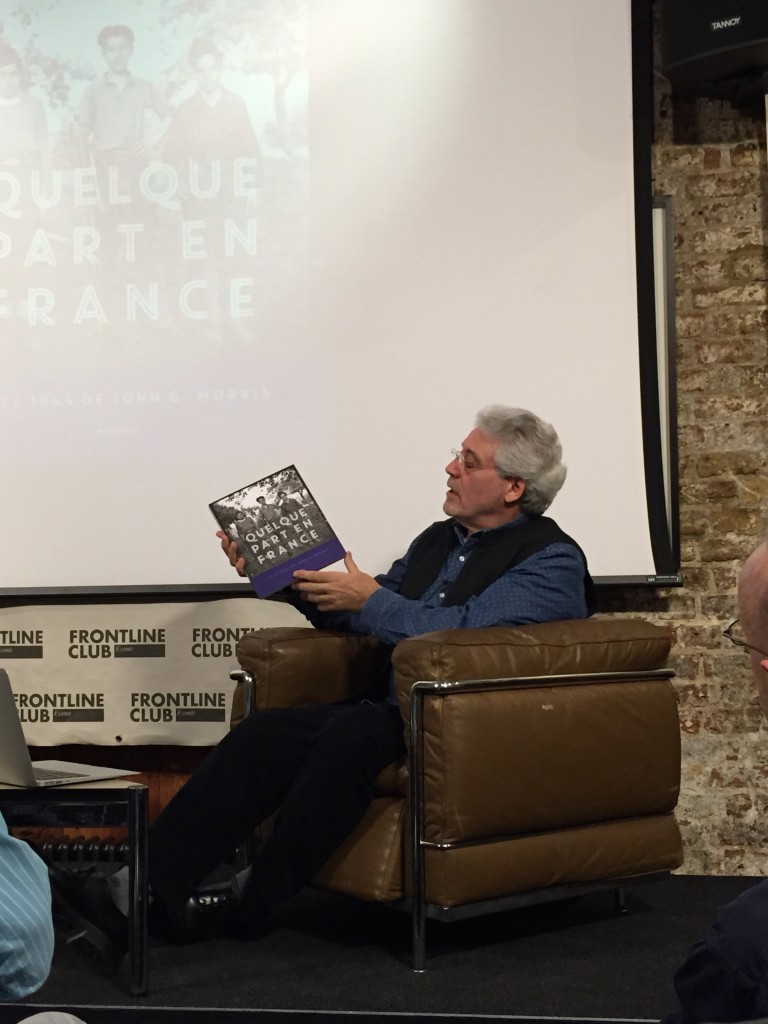 Despite having his photographs displayed and commended around the world, Morris can not become accustomed to being called a photographer.

He said, “When you have the privilege of working with the greatest photographers of the 20th century . . . you don’t call yourself a photographer. . . . I still don’t think I’m a photographer.”

“From Capa I learnt to look for the human message. . . . Photographers have to also pay attention to words,” said Morris.

Morris affirmed that his photographs did not influence his editing, and shared why he did not continue taking photographs after that trip:

“My job was being a picture editor,” he said. “My job was either to assist photographers or boss them around, not to compete with them. . . . It was just a camera I happened to borrow, . . . it was obvious I was a tight shooter.” But, he admitted, “The pictures are better than I thought they were.”

An audience member asked about censorship in the media during World War II. Morris said, “Censorship mostly, quite frankly, . . . occurred at the level of shooting. Photographers knew what not to shoot.”

Morris said that his book is a “testament to French people, it’s a love letter to France in a sense. I am very proud of that.”

He said, “Here were the French people subjected to terrible attack . . . and despite that, we were welcomed as liberators. . . . I share the dismay of my generation . . . with the present state, the state of world affairs. I’m a peacemaker from way back.”

“The images of yours have a tremendous impact today,” Pledge said to Morris, adding to the audience, “John never believed this could happen. He never took his images seriously as photographs, he took them as notes. . . . He was not trying to produce photographs.”

“History can be observed on various levels and one of them is just the common level of human reactions to ordinary situations,” Morris said.

You can watch and listen again here: