“Back in January 2012, images of Pussy Riot began to appear in the British press and you began to think, ‘I love these people! Who are they?’ and then they get arrested. . . . Obviously it was something we felt we had to pursue so we immediately got involved in working with them and starting to make this story. . . . The image of them in Red Square alone I think is enough . . . any filmmaker would go explore what these people are after.”

Many members of the audience asked questions on the role of both the foreign and domestic media in the trial. Lerner was somewhat circumspect about the role the media played, noting that the Russian media fought a “very vitriolic campaign against them” and that the role of the Western media may not have been very significant.

“I’m not sure what difference it really makes. Obviously it’s very good for them to know they’re supported by millions of people around the world and that kind of moral support is obviously something that sustains them and is useful but whether it has any effect whatsoever on the Russian state or society, I doubt.” 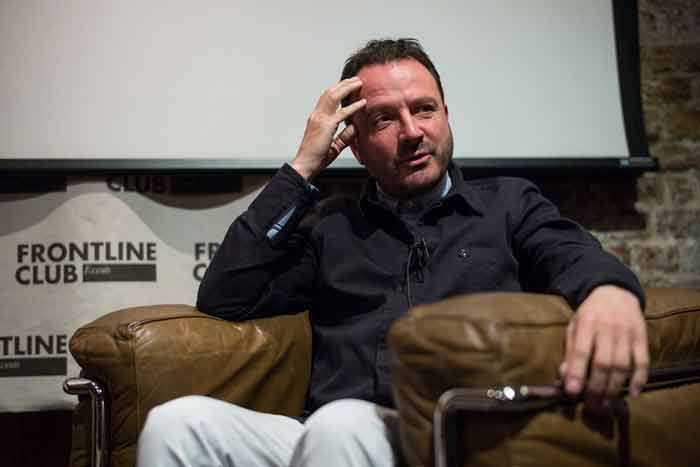 Pozdorovkin was more optimistic, noting that even if the majority of Russians were hostile towards Pussy Riot’s “Punk Prayer” in Russian Orthodoxy’s most sacred church, it at least sparked wider conversations.

“It’s a strange fact because in Russia it became this soap opera that everyone talked about . . . and I think ultimately it’s beneficial for people to even go through the intellectual motions of talking about feminism or talking about the relationship of church and state or the conditions of female prisons. . . . In my mind that’s how progress is made.”

Asked if they felt their work had marked them out as enemies of the Russian government the filmmakers noted that acutally the government and the Orthodox clergy had been quite open and helpful. Both Lerner and Pozdorovkin did admit some trepidation about their upcoming screening of the film in Moscow however, remarking that some footage in the film, including that of Pussy Riot’s performance, may be illegal under Russian law. As Pozdorovkin explained:

“Since [Pussy Riot’s] sentencing there’s been a whole series of laws that basically criminalise what they did. . . . Whereas in this case [the authorities] had to fudge it so what they’re charged with is a hate crime . . . right now there have been laws that have been based that make offence to religious sentiments criminal.”

Pussy Riot: A Punk Prayer airs on BBC Four on 21 October 2013. It is available on BBC iPlayer all this week.

Daniel is a freelance journalist and researcher specialising in foreign affairs, with an emphasis on Russia and the former Soviet Union. Twitter: @danielabkennedy