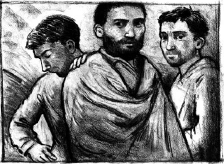 While Pakistan has helped the war on terror, it has been reluctant to crack down on militants from the Lashkar-E-Taiba group. Now it is under pressure to do just that – with explosive results.

The guard stands lazily at the entrance of a crammed brick bunker. Without saying a word, he checks my haversack and frisks me thoroughly. With an inquisitive look on his face, he gazes at the tiny picture on my identity card and whispers my name as if reassuring himself. Finally he moves to let me in. I enter the bunker, where his gun-wielding colleague has to squeeze his body to let me through another hole, covered by a raggedy blanket, to enter the compound. The main entrance of this police camp, a large and heavy metallic gate, remains locked. Spools of razor-sharp barbed wire, a large iron sheet covering the stretch of road with thick nails protruding from its surface, and a huge iron pipe form several layers of the security barricade. Half a dozen armed men, their fingers ready to pull the trigger, stand around the gate, while others watch from the pigeonholes of the bunkers erected above the compound wall.

The headquarters of the Special Operations Group, the counterinsurgency police, has always been a scary compound, and people even avoid the lanes around it. The screams from its dark and dingy torture cells, where captured militants were once interrogated, have become legendary in strife-torn Kashmir. Dozens of men have perished in this two-storey building.

On the few times I have entered the compound over the years, a strange tension was always evident. One particular room, hidden from the public, contained a selection of torture instruments: a hook in the roof with a nylon rope hanging from it, a metal bed with its legs fixed into the floor, whips and a thick wooden rod that would be used to roll over suspects’ bodies during “question-and-answer sessions”. The SOG operations were simple: extract information from the captured men and look for their associates. The militants countered, and 10 years ago sent fidayeens in police uniform into the camp to kill dozens.

This cycle continued for years, until a new officer arrived in the camp. Mohammad Irshad, the current Superintendent of Police, has changed the rules of the game. Like members of the militant group Lashkar-e-Taiba, he is a Salafi, and the only difference between them is in their understanding of jihad. While Lashkar men sneak in from Pakistan with a belief that they are fighting a holy war in Kashmir, Irshad contests it and has no doubt that his war against the Lashkar is well within the ambit of Islamic scripture. Thus, for several years, the camp’s interrogation room has been a site for regular theological debate, and Irshad puts each captured militant’s understanding of jihad to a rigorous test. Unlike Deobandis – the parent religious organisation of the Taliban, who belong to the Hanafi school of Islamic jurisprudence and follow Imam Abu Hanifa – the Salafis do not follow any particular imam and consider the Koran and Hadith as their only guides. The Salafis are a dominant school of thought in Saudi Arabia, and their world view is shaped by the teachings of Ibn Taymiyyah. Al-Qaeda’s leaders also follow this puritanical form of Islam.

This is an unusual counterinsurgency strategy even for Kashmir, where the militant movement against Indian rule is now dominated by the Lashkar – a group that believes its struggle here is part of a pan-Islamic movement, a compulsory religious duty and not merely a fight for people’s rights. Irshad and his team have managed silently to convince and co-opt several of the captured militants, and generated a vibrant debate within the Salafis. This has not become a big success only because a majority of Lashkar men prefer death over arrest. The Lashkar has been responsible for over 200 suicide attacks in Kashmir in the past decade. Within hours of the 9/11 attack, Pakistan took a U-turn on its Afghan policy, allied with the United States and became a frontline state in the ‘war on terror’. The sudden policy shift was major: from being a close friend and ally, the Taliban was now the enemy.

Since 2002, the Pakistani government has fought the Taliban and Al-Qaeda even at the cost of serious setbacks to its internal security, especially along its western border. But Pakistan’s efforts at tightening the noose around groups waging war against India have been extremely difficult. It has been impossible for Pakistan’s government to hand over the Lashkar ideologue Hafiz Mohammad Sayeed to New Delhi, though it did not hesitate to arrest Khalid Sheikh Mohammad and other Al-Qaeda followers on behalf of the US. This shows a dichotomy in Pakistan’s policy, and the reason is Kashmir and its history. Since Pakistan’s creation, the Kashmir dispute has been at the core of its existence.

Unlike Afghanistan, Kashmir has traditionally been a major influence on Pakistan’s domestic as well as foreign policy. Though the Pakistani government did launch a crackdown after the 2001 parliament attack, it insisted that this shift did not mean it was abandoning its support for separatists in Kashmir. The other aspect influencing Pakistan’s policy is to do with ideological and demographic differences between the Taliban and the Lashkar. The Taliban movement in Afghanistan and Pakistan is primarily modelled on the Deobandi school of thought, while the Lashkar is Salafi-based. Apart from differences in the practice of religion, Deobandis in Pakistan seek the establishment of an Islamic state in letter and spirit, and even favour a jihad against the establishment, while the Salafis do not support rebellion against the government in a Muslim country, but advocate reform to turn the ruling elite into “Muslims at heart”. This means that the Lashkar and its parent organisation, the Markaz-e-Dawa-wal-Irshad, were never a security risk for the Pakistani state.

In 1986, Hafiz Mohammad Sayeed and two other Pakistani professors – Dr Zafar Iqbal and Hafiz Abdur Rehman Makki, a close relative of Sayeed – set up the Markaz-e-Dawa-wal-Irshad (Centre for Preaching and Guidance). Sayeed, a professor in the Islamic Studies Department of the Lahore University of Engineering & Technology, had been to Saudi Arabia for higher education in Islamic studies, where he and the others associated with Saudi ulema at Madinah University. The connection was Sheikh Abdullah Azzam, a Palestinian from Jenin refugee camp, who had links with the Muslim Brotherhood of Egypt and a well-known ideologue of Afghan jihad. Soon after his return from Saudi Arabia, he and two other professors set up the Markaz in Muridke, near Lahore.

A year later the Lashkar-e-Taiba was launched, with the aim of participating in the Afghan war. Its militants fought the Russians inthe Jaji area of Paknea province together with the Afghan mujaheddin outfit Itihad-e-Islami. But as the war reached its end, the group shifted its attention to Kashmir. According to security agencies, its Valley operations began in 1993. For years, the group kept a low profile, so much so that government agencies had little clue about its ideology and cadre. The first sensational act by the outfit was in July 1999, soon after the Kargil war, when it launched a fidayeen attack on a paramilitary camp.

This brought the group and its top ideologue Hafiz Mohammad Sayeed to the public’s attention and ever since that July attack, the Lashkar and Sayeed have remained in the headlines. This Salafi group was in absolute conformity with Pak
istan’s policy until 9/11 that blurred the line dividing armed movements and terrorism internationally. And this is why President Pervez Musharraf’s decision to ban the Lashkar was seen as a major step, even though it did not match New Delhi’s demands. On December 24, 2001, almost a month ahead of Pakistan’s ban on the Lashkar, Sayeed called a press conference and officially distanced himself from the Lashkar, closed down the Markaz-e-Dawa-wal-Irshad, and set up Jamaat-ud-Dawa, with an exclusive aim of dawa (preaching) and charity. The Dawa describes itself as “a multi-purpose movement that aims to spread the true teachings of Islam” that “works peacefully, regardless of the circumstances in the country [Pakistan]”. Before Pakistan’s ban on the Lashkar, Jamaat-ud-Dawa had 1,150 organisational offices in Pakistan, of which 74 were at the district level.

The Lashkar was officially confined to Pakistan-administered Kashmir. These measures, announced publicly by Sayeed, worked, and in time the organisation managed to evade a total ban by the Pakistani government. By contrast, Islamabad responded with an iron fist to Deobandi groups. While the Pakistani army has waged a war against Tehreek-e-Taliban in Fata, the military action on the Lal Masjid mosque in Islamabad in 2007 showed the Pakistani establishment’s intolerance to any threat to its authority. The mosque and its two affiliate Deobandi schools were run by two brothers, Abdul Rashid Ghazi and Maulvi Abdul Aziz, who vehemently supported “jihad against America” and condemned Musharraf for joining the war on terror. Lal Masjid was involved in challenging the writ of the government by setting up a parallel judiciary inspired by Sharia law. The Pakistani army’s Operation Silence ended in a bloodbath at Lal Masjid, with Ghazi and hundreds of students dead.

Pakistan had another practical difficulty in cracking down on the Lashkar. While the Taliban draws most of its cadre from the Frontier province, the Lashkar’s men are predominantly from rural Punjab. And thus any action against the Lashkar perceived to be taken as a result of pressure from New Delhi will have consequences in Pakistan’s biggest province and the hub of its political elite – and thus is a big risk.

But the attacks in Mumbai last year brought Pakistan under international pressure to act against the Lashkar and its parent group, Jamaat-ud-Dawa. Both the Lashkar and Dawa denied their role in Mumbai. The Pakistani government took over Dawa’s headquarters at Muridke, closed down the schools and arrested its founder, Hafiz Mohammad Sayeed. The government also launched a crackdown against the Lashkar, arresting several of its top leaders for their suspected role in the bombings. But the attacks in Mumbai were followed by two similar strikes in Lahore which helped Islamabad to mollify international pressure to act against Lashkar. It is too early to tell if Pakistan will confront the Lashkar inside its own territory, but if Islamabad decides to adopt a uniform policy towards all Islamic militant groups in the country, it will open a dangerous new frontier for Pakistan, with military and political consequences. Unlike the Taliban, the Lashkar’s jihad nurseries function deep inside Pakistani society, and Kashmir is its main recruiting sergeant.

If recent incidents along the Line of Control are an indicator, the flow of Lashkar men into Kashmir resumed unhindered as soon as the snow started to melt over the mountainous passes. The Indian army intercepted two major groups of Lashkar militants when they sneaked in through the heavily guarded Line of Control in March 2009. Around 25 Lashkar men were killed. Irshad believes that the war is not enough to confront the Lashkar: “We certainly need to understand them. Death is not a deterrent for them, it is a reward. There is no way we can win this war by guns alone.”

Please subscribe to the Frontline Broadsheet. It is only £15/year for four issues.