The spirit of Punk lives on in Social Innovation Camps 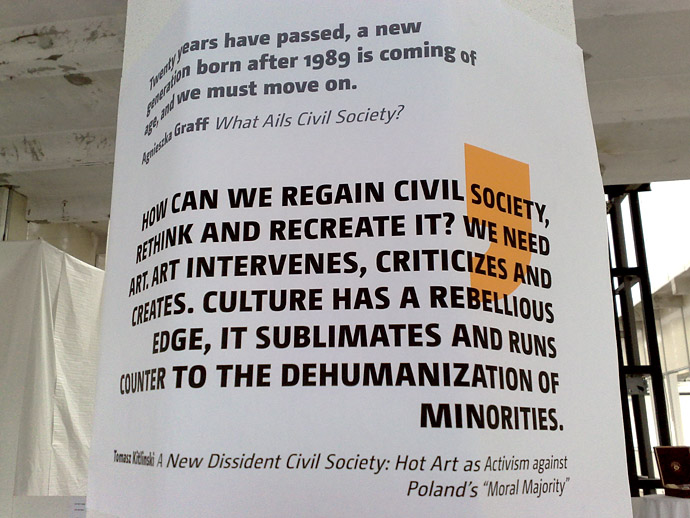 Twenty years after the fall of the Berlin Wall, civil society activists and organizations met this week in Bratislava, Slovakia, to assess and discuss the state of civil society and democracy in Central and Eastern Europe. But, unlike previous CEE Civil Society Forums, this year’s event featured an added component: a Social Innovation Camp held on the sidelines of the conference to demonstrate how new media tools could be used to reinvigorate civil society in the former Communist space and energize activists on both an individual and collective level.

We think the web and related technologies hold huge potential to change some pretty fundamental stuff: how people hold those in positions of power accountable; who they rely on to provide the services they need to live healthy, happy lives; or how they make a difference to something that affects them.

But for any of this to happen, we have to work out what people really need and start building the technology that can help – which is what Social Innovation Camp is all about.

Writing on internet.artizans, one of those behind the idea of Social Innovation Camps, Digital Guru Dr. Dan McQuillan set the background for the initiative just days before the CEE Trust forum.  However, he notes, the camps are not just about providing existing organizations with new tools, but rather about empowering individuals again now that many NGOs have become institutionalized and in some cases complacent and maybe even impotent in light of the obstacles to democratization which still remain in many countries.

The truth is that we didn’t get rid of the Berlin Wall. Sure, there was a festive destruction of that hated bit of concrete, but the Berlin Wall and all walls like it are the physical parallels of a certain approach to the world; a way of dealing with life that works best with division and control.[…] NGOs are "autocratic", "top-down" and "donor-driven", have an increasing "political dependence on the government in power" to maintain an "existence more closely related to the salaries of employees than the potential benefits for the target group". Bluntly, they are afraid that truly active citizens could undermine their "monopoly on problems".

Enter Social Innovation Camp! Of course we’re not the answer to all that. But SICamp is like one of those early crowbars, digging at weak points in the wall, looking for leverage. And our leverage is digital because that enables people to connect and collaborate without the overhead of old institutions. It enables crowdsourcing, wikifying and the emergence of new possibilities by mashing stuff up.

And that’s why we say SICamp is about "individuals using the web to change things" and not about making the third sector more efficient or effective. In my experience, people working in an NGO automatically filter out ideas that they know don’t fit with the organisation’s expectations, even if they’re innovative ideas. An organisation bringing an idea to SICamp would want control and this would kill the magic. At SICamp the development of the idea is totally in the hands of the team who’ve formed around it. They can change it and play with it. They can be spontaneous and creative. But this is serious play – they want to win, and to win they need to create something that will have real social impact.

SICamp and all similar hacktivist initiatives are using digital tech to break through the walls of resources and respectability, tapping straight in to people power by creating a space for free imagination. The liberatory potential of digital is that it allows us to do this without asking for permission. The tools are to hand – down with all Berlin Walls! link 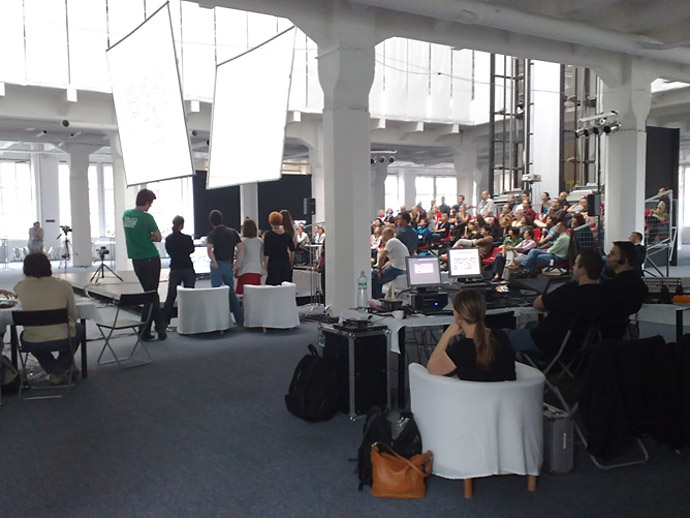 In another entry specifically commenting on the situation in Georgia, McQuillan implies that the original notion of civil society being made up of committed and dedicated individuals working to achieve change has sometimes been forgotten and there is resistance within established organizations to new ideas. "Although online campaigning is of interest to both journalists and NGOs, the real innovations will come from people thinking outside of those disciplines," he wrote. "If the web is going to catalyse in Georgia then people need to to think differently and feel more empowered."

Interestingly, and somewhat encouragingly, Hatia Jinjikhadze, Media Support Program Manager for the Open Society Institute in Georgia, was on hand to observe both the forum and the camp with a view to staging something in the former Soviet republic. Speaking to the Frontline Club, Jeremy Druker, Executive Director of Transitions Online and also one of the co-sponsors of the camp,  said that was one of the intentions. Not only can new approaches and tools benefit individuals and civil society activists, but they can also serve as a valuable resource for the mass media.

[S]ocial innovation camps [are] different than the usual Bar Camps – unconferences where people get together and present what’s interesting to them. Some of it is interesting, but some of it is not so interesting.  They are mainly awareness raising events, but there’s no physical outcome. Social Innovation Camps are a response to that where something is created over the course of two days which can lead somewhere.

It’s a great idea so when the Central East European Trust was looking for something innovative which would attract the younger generation and go beyond the normal NGO mentality or circuit, if you want to call it that, I suggested the idea [to be held] on the sidelines of their traditional Civil Society Forum. […]

The teams were international and hopefully a lot of people who were here will take it back to their own countries and do it at a national level.  Even though it crossed country lines, there was a real aspect to this which I was happy to see. People come up with ideas that are adaptable to a whole number of countries, issues and interests so the outcome is not just a project meant for Hungary or Bulgaria. I think that most of the countries that TOL deals with in Central and Eastern Europe, Central Asia and the Caucasus are definitely ready for this type of thing.

I think there’s an overlap (between media and civil society), but it is a new thing for us. Our mission has always been to train journalists from the post-Communist region, [but] we had our first grant from the EU to teach NGOs new media skills. I think it was an outgrowth of the same skills we were teaching to journalists and it made sense for NGOs to learn as well. I think a lot of these sites can be tools for journalists to do their job better, and in a way that’s the next step.

Help these sites get started, nurture them, and tell the media about them. Spread the word to journalists about them so they can use them as a resource, that type of thing. I think there is that overlap, but it is also something that we’re interested in because we believe in the power of new media for social impact and not only to diversify the power media and freedom of speech. link

McQuillan speaks in plain terms, equating social innovation camps to a spirit long since dead among many NGOs, but which sorely needs to return. He even says he’s not entirely sure that civil society understands the importance and significance of new media. "Well, they think we’re here as a kind of cabaret," McQuillan told Frontline. "NGOs were an exciting idea when the Berlin Wall came down, but everything’s changed. The Internet has come along so they wanted us to show something and we used this as an opportunity to stage the first international Social Innovation Camp."
Nonetheless, he notes, many attending the CEE Trust Civil Society Forum approached participants of the Social Innovation Camp to speak more about the technology and how it could be adapted for their needs. "My guess is that they think it’s great if an NGO has a really good Facebook group, but what we’ve shown is startups [new media projects] actually working and that these were really interesting projects created because of a certain need," McQuillan explained.
Indeed, a prototype site using Ushahidi which also integrated Twitter to map ultra-extremist attacks on Roma in the Czech republic could quite easily be used to monitor environmental damage. It has already been used in Kenya and India to document post-election violence just as it could also be used to report electoral fraud. What matters is that people with ideas can work with those who can put together the new technology to make them work. McQuillan equates this to the spirit of punk rock in the late 1970s and early 1980s.

It’s a recipe really, and the manual for doing it is called the ‘cookbook.’ It’s about bringing together the ingredients of geeks and designers, marketers and PR people, business people, and anyone else who is interested in or passionate about it. We mix them up and the mission is to take those simple ideas to produce working prototype projects from nothing in 48 hours.
The projects come from people’s own ideas of what needs there are, what really frustrates them, what really upsets them, or what really makes them excited So, the projects selected this time were psychological first aid online, doctor rating services, a network for supporting elderly relatives, parent’s self-help group, road safety and reporting traffic violations, and mapping attacks on Roma. So now the challenge is after having proven what is possible, they [civil society] have to figure out how they’re going to support it.
The Dead Kennedys were the first band to open my eyes to the idea that another world was possible and I think the spirit of punk lives on in social innovation camps. They were talking, as we are, about some serious shit – care for the elderly, psychological distress, Nazi attacks — but they could also have a lot of fun, and they felt energized by it, and decided to do something about it.
D.I.Y., that’s the spirit, so yeah, the Dead Kennedys are the godfathers of the Social Innovation Camp. link 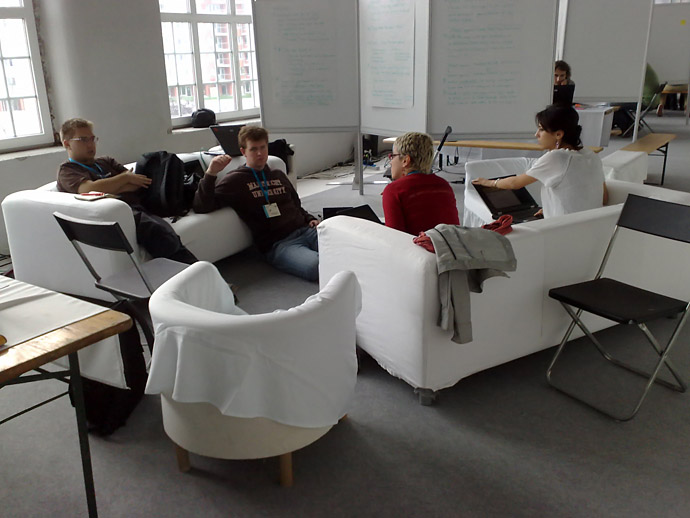 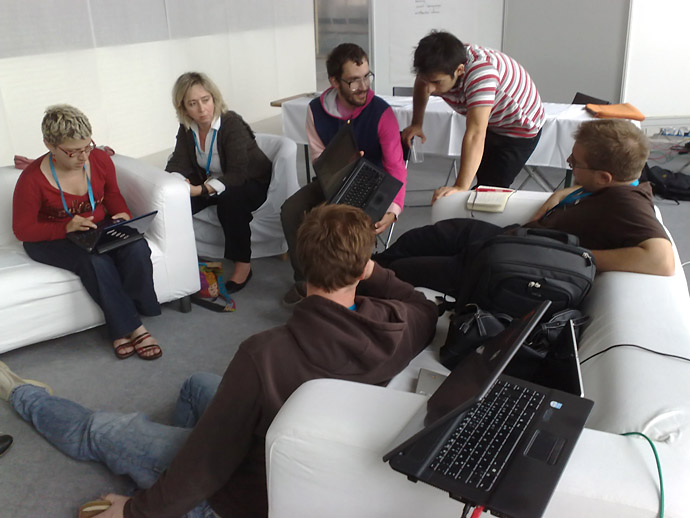 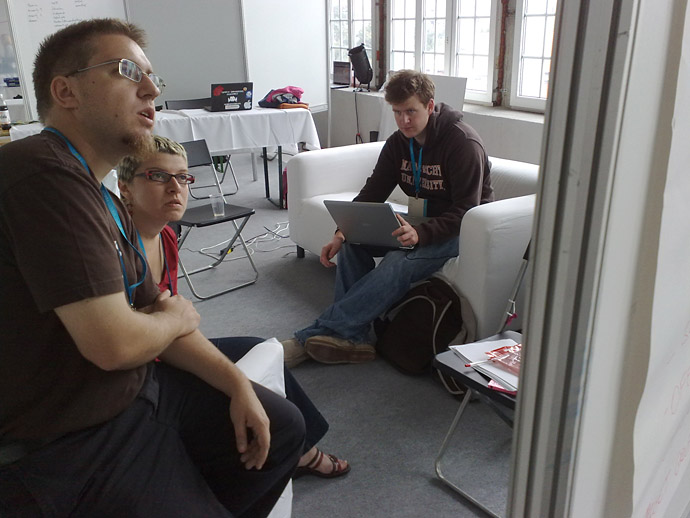 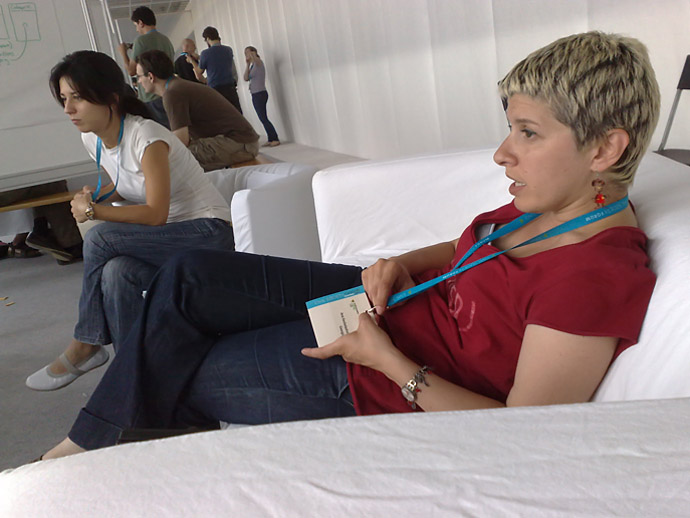 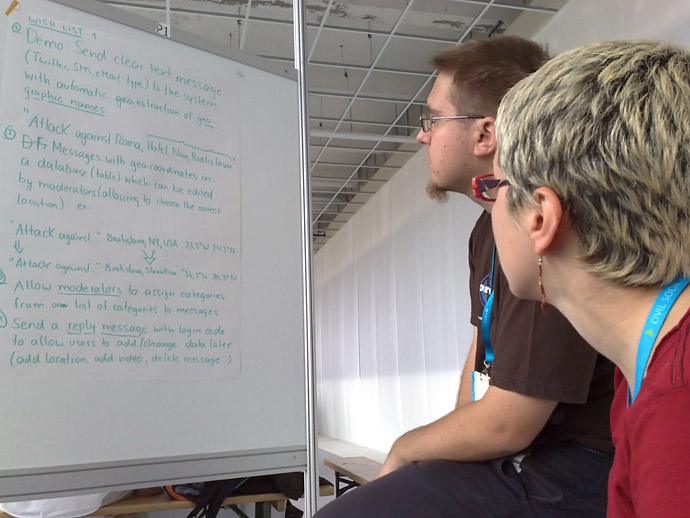 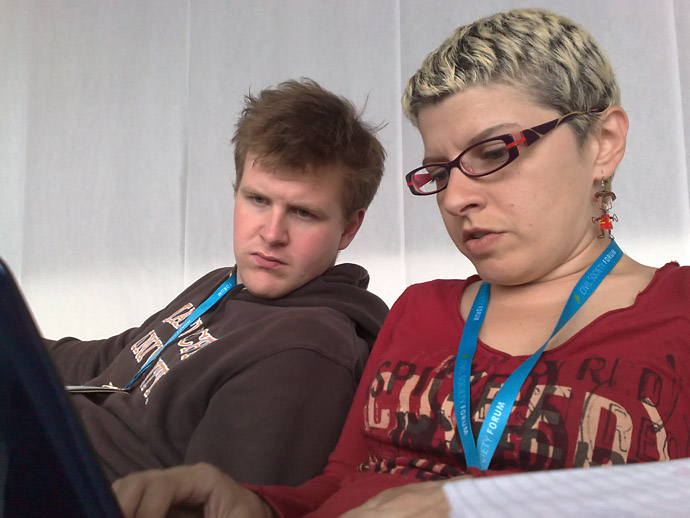