Protest, technology and the end of fear: the week ahead at the Frontline Club 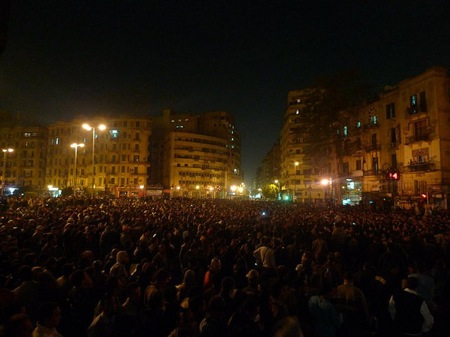 This week there is an opportunity to hear from some of the key figures in the movement that swept President Hosni Mubarak out of office. On Wednesday the author and cultural commentator Ahdaf Soueif will be in conversation with the BBC’s Mishal Husain, looking back at the 18 days in Tahrir Square, the spirit of the Egyptian revolution and how it can be safeguarded.

On Thursday, in association with the BBC Arabic Service, there is a remarkable opportunity to hear some of the key figures in the Egyptian revolution, including Khalid Abdalla, Salma Said and Louis Lewarne, to discuss the origins of the pro-democracy movement and the role of social media in shaping it at a special external event at The Royal Institution of Great Britain.

On Sunday our screening is Restrepo – the Oscar nominated feature-length documentary by Frontline Club member Tim Hetheringon, which chronicles the deployment of a platoon of US soldiers in Korengal Valley in Afghanistan.

And don’t forget our Club Quiz on Tuesday – enter as an individual or as a team of six for an evening of entertainment hosted by David Dickinson.