The film is centred on the Bosnian village of Kevljani and follows author and youth worker Kemal Pervanic as he, amongst other things, revisits the site of his internment in the nearby Omarska detention camp, confronts a former teacher who sanctioned his torture and runs a reconciliation camp for the area’s youth.

The Muslim village in the north of Bosnia is surrounded by ethnically Serbian communities and as such was directly affected during the bloody break-up of Yugoslavia. Using archival footage along with personal testimonies from the surviving villagers, Evans manages to give a good sense of what pre-war life in the mixed Croat, Bosnian and Serb neighbourhoods was like; a place where Pervanic remembers that his “childhood was really beautiful”. This is an idea that the still visible destruction makes hard to imagine, especially when coupled with horrific accounts of torture, beatings, humiliation and deportation by former neighbours – the men who became the guards, torturers and perpetrators of many of the associated crimes against the six thousand strong Muslim community.

During the panel discussion following the screening, Vulliamy asked Evans why he made the film, to which he replied:

“The reconstruction from the war seems very very slow and there are lots of unresolved issues. . . . Just sitting in people’s houses and listening to people talk in ways I have never really heard people talk about war and how it affected them . . . for me, I just wanted to hear their voices and have the opportunity to tell their story, and its been a very moving experience for me, to have the privilege to be in these people’s homes, and hear them talk about these things. No one listens to their story; they have no one to tell their story to.”

This inability to talk about what happened during the war was a central theme throughout the discussion, with Pervanic stating that:

“This was so personal . . . what happened was so big that the perhaps the Serbs cannot recognise what they did. There is a lot of denial in our community”. 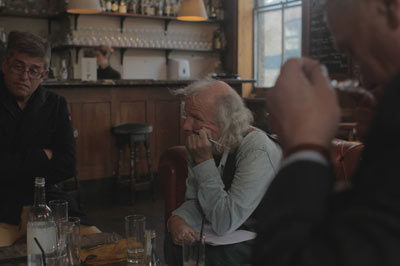 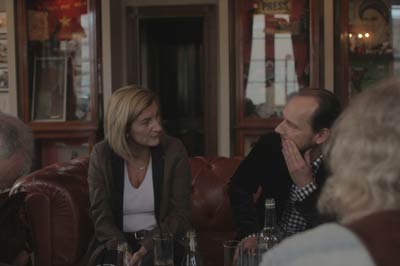 When asked who else would want to see this film Pervanic replied:

“It’s a human story, it’s not just about a small village in Bosnia…I want everyone to see it. We must know our past. Without it we are nothing, we learn nothing.”

The audience – which included a number of Omarska camp survivors – was asked by Evans for their feedback, and while the loud applause suggested it was well received, the political tensions and divisions that the Balkan states are infamous for quickly rose to the surface. A number of questions focused on why the film didn’t cover how or why the war happened, or give a more balanced perspective – including more Serbian views – to which Evans repeated that he was not “interested in making  political statements or a  piece of journalism. . . it was never my intention to make a film about war in Yugoslavia”.

Despite all that Pervanic has experienced, his sober response to a somewhat antagonistic pro-Serb question provided a calming closing statement to the night:

“Generals don’t suffer, politicians don’t suffer; it’s people like me who suffer. . . . I don’t want to blame, that is not the point of the film”

More information can be found on the film’s website, and you can view the trailer of Pretty Village here: