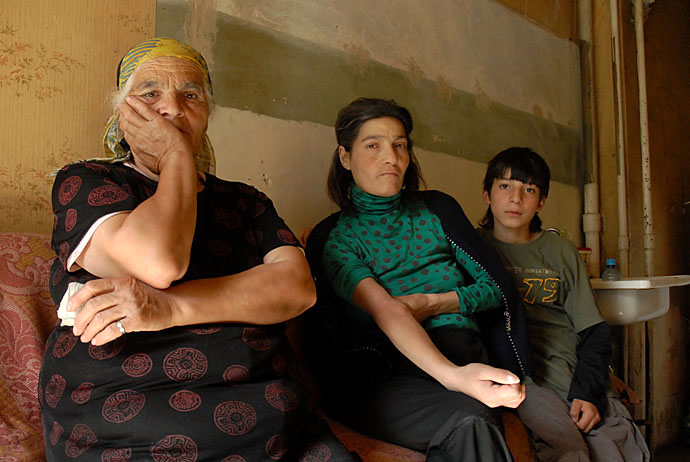 Sometimes I really hate my job. Having first been inspired some 27 years ago by the potential for photojournalism to effect change, the situation in regions such as the South Caucasus can instead be depressing. While there have been some successes such as managing to get the Armenian government to finally admit there was a homeless problem in Yerevan and to open a shelter, by and large the media is pretty impotent in countries such as this. So, when I had to today photograph 34-year old Naira Thomasian, a kidney dialysis patient living in poverty, for the World Health Organization (WHO) in Geneva, I was dreading the question she would of course end up asking.

That is, will this interview and photographs help to change her situation. Of course, I couldn’t say that it would, only that I hoped so. A few years ago, statistics showed that just one in three Armenians sought medical care when they needed it thanks to a system of informal payments or a lack of resources at hospitals themselves, and I doubt the situation has changed much since. Thankfully, Naira mostly has free treatment, but what about some of the other problems she faces? Problems, for example, such as living in poverty, being unable to work, and there being insufficient funds in the State budget to provide adequate social welfare or assistance.

"I was first diagnosed 10 years ago and I didn’t know what to expect. I wasn’t working then as I was married and had my child to look after, but when I was diagnosed with this illness my husband left me. He didn’t understand or want to help. My son was just a baby and life has been hard ever since.
[…] by law they have to provide the medicines, but what happens if they don’t have them? It’s not their fault and they have the main medicines I need.
[…]
We don’t even have enough money for food so I don’t eat properly either, but what about the health of my mother and son?
He’s 11 and she’s 71 and they never go for treatment because we can’t afford it. Nobody is working and the 16,000 AMD (about $43) we receive in social benefits on top of my mother’s pension is not enough to cover much more than renting these rooms.
Of course, they say they’re healthy, but my mother has constant headaches. She says has to look after me so can’t find the time to even think about looking after herself. We have no money for food and so she spends a lot of her time going out to find herbs to bring back to cook."
A local NGO working with dialysis patients helps Naira out with advice and support, but despite a huge amount of money on show in the form of flash cars and expensive restaurants or boutiques in the center of Yerevan, her situation is not unique. Indeed, UNDP recently warned that poverty looks set to increase this year now that the global economic crisis has hit Armenia. The Diaspora could help, but generally doesnt. There are exceptions, of course, but by and large many ethnic Armenians from abroad either don’t want to see the reality faced by individuals such as Naira or simply won’t because they stay only in close proximity to where the (usually) corrupt money is.
Not a good day for me at all. Quite depressing in fact, and made worse by Naira having had dialysis a few hours before I arrived. She was in pain and very weak, but still welcoming and accomodating to allow me to do my work. Humbled, here’s hoping that increased attention from the international community will finally see issues such as poverty and access to medical care in Armenia resolved so that there won’t be as much need for me to continue to enter into the lives of people such as Naira before walking away into a far different world 30 minutes later. I’ve been photographing poverty in Armenia for 9 years now. Isn’t it time something changed so that I don’t have to?
Photos: Naira Thomasian, Yerevan, Republic of Armenia © Onnik Krikorian for the World Health Organization (WHO) 2009