We feared a crackdown when they told us to leave Yemen

Portia Walker, who is now in Addis Ababa in Ethiopia, describes her deportation with three colleagues from Sana’a, Yemen’s capital and how today’s shooting of protesters confirms their fears that it could mark the beginning of a government crackdown. 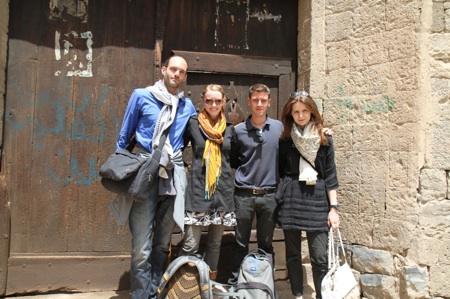 We will probably never know who gave the order for our expulsion or which of our actions provoked the order for our arrest. No explanation was given by the colonel who dealt with us, speaking in Arabic throughout. But our fears that our deportation was the prelude to a government crackdown on opposition demonstrators were realised on Friday afternoon when snipers opened fire on the crowds that had gathered for prayers at Sana’a University.

Like a hammy television game-show host, the blue-bereted colonel had addressed us each in turn, reading aloud our names and pausing melodramatically before he barked, "it is demanded that you leave today!" We had been arrested earlier that day when five armed men stormed into the apartment I shared with three other foreigners: Briton Oliver Holmes, who worked for the Wall Street Journal and Time magazine, and Americans Haley Sweetland Edwards who wrote for the LA Times and Joshua Maricich, a long term Yemen resident who worked as a writer and photographer and had set up an adventure club to teach Yemenis to rock climb.

I had been covering the growing pro-democracy movement in Yemen since it began in late January. Writing in the Washington Post and the Economist, I had described the rows of bodies I had seen lying struggling to breath after being tear-gassed and the growing opposition to Yemen’s president of over three decades, Ali Abdullah Saleh. As the opposition demonstrators grew in number and the revolutionary spirit spread further into this wretchedly poor but heart-breakingly beautiful country, almost every day saw fresh clashes between pro-government thugs and peaceful protesters.

There were only a handful of foreign journalists, all based in the capital, to report on what was happening. It was hard, as it always is in Yemen, to get to other parts of the country. To leave Sana’a, all foreigners must obtain a "tasrih" or letter of permission from the tourist police. Even getting into the country at all is a challenge. Yemen has not issued journalist visas for over a month now. I had entered the country on a visa provided by the language school I attended while in the country but had also gone to register at the gleaming Orwellian headquarters of the Ministry of Information so that I could attend press conferences and receive government press statements.

At the detention centre, we spent hours waiting, guarded by men with Kalashnikovs, our phone and passports taken from us, before being allowed to spend an hour packing up our possessions under armed guard. Eventually we were driven to their airport where friends who had been working in Yemen were boarding flights to Doha and Dubai, as their companies evacuated them. Our armed guard checked us in and kept hold of our passports and phones until we were in the departure lounge, soon to board our flights.

So far the death toll after snipers opened fire on protesters today is at 41, with many more said to be in a critical condition. A week beforehand, I had been in that crowd for Friday prayers, standing on a scaffold at its centre as the rows of demonstrators stretched as far back as I could see. Amidst the vast mob, I was protected by men who wanted me to see what was happening in their country and tell others. Now I can offer them little protection in return.