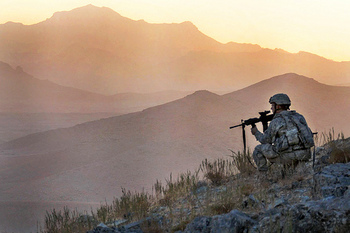 As the United States and allied forces prepare to deploy 15,000 troops in southern Afghanistan to battle Islamic insurgents, experts are warning that the problem isn’t one of physical might but of completely misunderstanding what the Taliban is.

In the week that the number of British soliders killed in action in Afghanistan since 2001 passed the number killed in Falklands war, authors and Kandahar residents Alex Strick van Linschoten and Felix Kuehn warned that the “Taliban” is too diverse, disparate and varied to be beaten by military force alone. 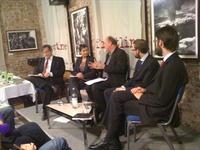 “It’s an assembly of different groups and leaders. When we look at Afghanistan today, we have a range of groups within the Taliban and a lot of local greviences – people who are fighting for various different motivations. It’s immensely complex and it’s difficult to talk about ‘the Taliban’.”

Here’s an audio interview with Kuehn…

Afghan Amnesty International researcher Horia Mosadiq spoke in detail of her first-hand experiences of Taliban brutality and strict theocratic rule and explained that while the Taliban had filled a power vacuum after the Soviet war of the 1980s, their promise of peaceful rule was soon broken with “massive and serious human rights abuses”.

“Women were banned from going outside the home, music was banned… men were ordered to have long beard and wear shalwar kameez… This is why most women stayed at home – schools were banned, university was banned (for women).

“Every single man was subjected to pray five times a day in the mosque – anyone who didn’t could be slashed in public for me it’s a big black hole when they speak of reintegrating the Taliban,” she said.

For freelance journalist and Afghanistan analyst Ken Guest, the “kinetic” force about to rain down on Afghanistan from US and UK troops anmd air support is the wrong kind of warfare – what’s needed is victory in the “psychological” battle.

“We have a strategy that’s entirely designed to serve a kinetic application… There will be an effect around the area where this force is deployed, but we can’t keep them there forever. When they (troops) leave the people will come back”

Read our report of when the UK’s former Afghanistan ambassador Mark Sedwill – now NATO’s most senior civilian in the country – came to the Frontline Club in January.