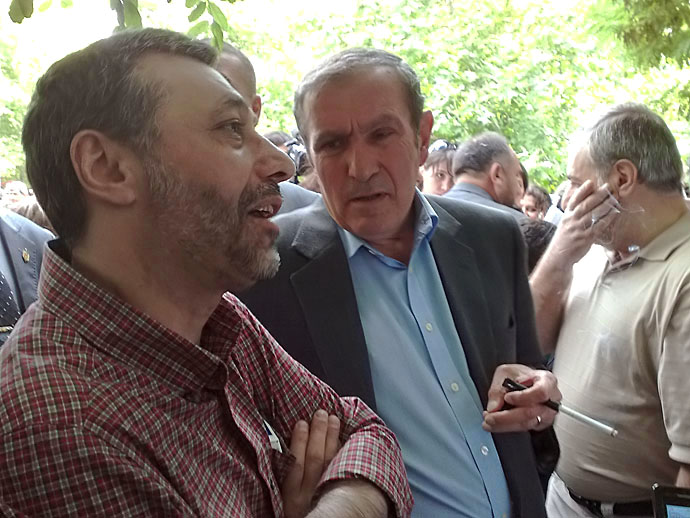 It was for times such as this that I decided to follow the example of fellow Frontline Club blogger Guy Degen by getting myself a Nokia N82. After sitting at the Yerevan Opera uploading images taken with a Nikon DSLR, but  transferred to my phone’s memory card so I could ftp them via free wi-fi at a cafe, I was wandering home past another park when a few hundred people standing around caught my attention.

When you see things like that in Armenia it usually means something political is happening — and it was. Earlier in the day a Yerevan court had found four senior opposition figures guilty of organizing the 1 March 2008 post-election disturbances which left 10 people dead.

The Council of Europe and others, however, consider the case against the four men, including two MPs and a former foreign minister, to be politically motivated. After a year of international pressure an amnesty was announced last week and the still convicted men walked free. The former president and extra-parliamentary opposition leader Levon Ter-Petrossian was there to greet them. Nothing spectacular, but I managed to tweet a few pics and broadcast a short 20-second live mobile video from the scene via Qik. Meanwhile, Unzipped comments on the release of the men and RFE/RL has more details. There’s also my roundup for Global Voices Online here.