Photo Week 2012 – Voices of the South Atlantic with Adriana Groisman 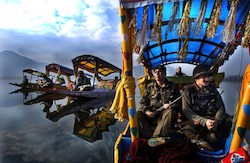 An intimate evening unfolded at the Frontline Club last night, as Argentine photojournalist Adriana Groisman talked through her photography commemorating the Falklands/Malvinas War.

In a venue famed for its images of conflicts, Groisman’s work presented an unexpected calm – rolling waves in black & white; stark island landscapes in grey hues tinged with colour. But rather than see beauty in the images, it is the scars within the landscapes she urged the audience to understand.

‘Voices of the South Atlantic’ began when Groisman accompanied National Geographic on its search for the Belgrano, the Argentine warship sunk by the British to the loss of 323 lives. Soon after, however, the project gained its own momentum:

“I showed it in Buenos Aires, and was able to see how it was received. That was what     inspired me to keep working on the project; the fact that people were seeing somethingtotally different, because the work did not force them to stand on one side or another of theconflict.”

With politicians ruled by their own agendas on both sides, Groisman sought out another avenue, and united Argentines, Brits and islanders affected by the conflict to reconcile with one another.

Bringing together the man who took a fateful torpedo shot at the Belgrano and one who received the blow, for example, seems an ill-fated venture. Yet granting the men innovative opportunities, such as writing down one wish from the other side, resulted in an openness Groisman said many had thought themselves incapable of.

“It’s strange that we would try to kill each other, when we have so much in common,” said one participant in a short film of the project.

This desire to close the divide plays out throughout Groisman’s work; in one piece she has united all those who died in sea-related hostilities, and notes that with many names it is impossible to tell which side they fought on.

While the tide may be turning in Argentina, with veterans at last receiving better treatment, Groisman said raw emotions still rule: “The few people that are proposing a new way of looking at this are being dismissed as traitors.” Just last month, for example, a television advert was aired depicting Olympic athletes training on ‘Argentine soil’ on the Falkland Islands. The British government responded with furore, while still plotting oil exploration in the region.

But while some are still unwilling to open dialogue, Groisman explained that in getting people together (in a studio lifeboat, no less) to see the faces and hear the voices of the war, reconciliation is achievable:

“The experience between these people made me realise that for former enemies, it ispossible to find common ground and understand each other, and acknowledge eachother’s pain. What this work is proposing is to include rather than exclude, and look at each other as humans.”

Adriana Groisman:Voices of the South Atlantic is showing at Photofusion in Brixton, London, until 25 May.