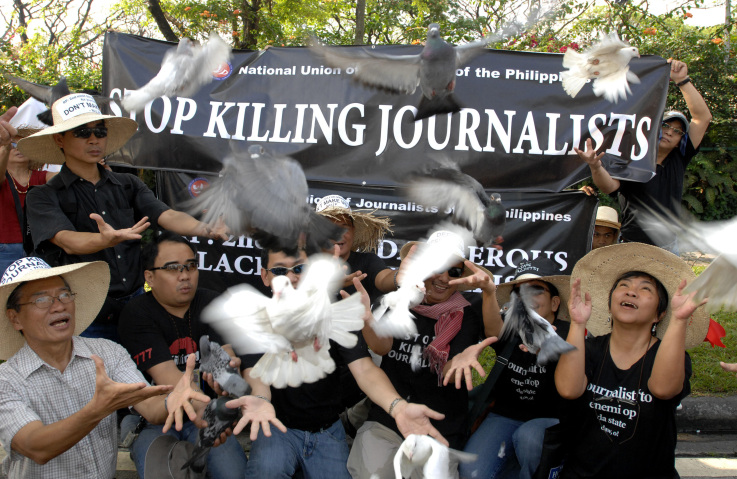 In the latest attack on a journalist in the Philippines, Ronaldo Doong was attacked by two armed men while travelling on a highway in Colorado village in Digos City in the southern Philippines on Saturday. The brodcast journalist, who works for University of Mindanao’s Radyo Ukay, sustained bruises and cuts during the assault. The attackers had a handgun and pulled the trigger three times,

Doong said one of the men actually pulled the trigger of his handgun but it apparently jammed. “There were three clicks,” he said… The man, in an apparent show of frustration, kicked the motorcycle they were riding, causing him and Avila to hit the pavement… But he said he was sure their intention was to kill him. Before leaving, he said the armed men warned him that they would do him more harm if he were to continue broadcasting. "They told me I am already hurting some people because of my commentaries but they did not say who these people are," Doong said. link

The Philippines is one of the deadliest places for media workers. 63 have been killed in the line of work in the past eight years. This is not the first time a Radio Ukay journalist has been attacked. In 2006, Armando "Racman" Pace was shot dead in a similar drive by motorcycle attack. And just one week ago radio journalist Ernesto Rollin was gunned down in Misamis Occidental. The National Union of Journalists of the Philippines keeps a list of those killed. The 2008 "Attacks on the Press" report by the Committee to Protect Journalists quoted Supreme Court Chief Justice Reynato S. Puno attacking the culture of impunity that follows many of these attacks on journalists,

“Unless and until we do something to submerge this pernicious culture, these attacks will continue to litter our collective consciousness with the corpses of people who are bearers of truth.” link

Photo from Ares in the Wired Journalist network.