Out of the Shadow

The screening was followed by a Q&A with director Hanan Abdalla, moderated by independent film curator Yasmin El Derby.

Abdalla is a British-Egyptian freelance documentary filmmaker. This, her first feature-length documentary, premiered at the Berlinale and won the Best Documentary Filmmaker Award at the Doha Tribeca Film Festival.

The Q&A began by Abdalla explaining how she gained access to these women:

“I knew two of them personally. . . . One of them was my nanny and so I have known her since I was five – so I heard a lot of these stories as I was growing up. Shahinda I didn’t know personally, but knew my grandfather and my uncle because of the resistance in the 60s and 70s. These connections made it easier to talk to them.”

An audience member then asked Abdalla to justify her choice of title for the film:

“The reason why I chose this title is because it’s a very famous saying in Arabic, in Egyptian colloquialism. . . . It says a lot about the patriarchy that exists in Egyptian culture. For me it was very interesting to see how this patriarchy permeates through their daily life.”

She continued by saying that although there is clear oppression of these women, there are also brave examples of how they have tried – and often succeeded –  in fighting against it:

A gentleman from the floor asked about two women wearing the full niqab – who expressed opinions more radical than probably any other women in the film – and whether this was the norm? 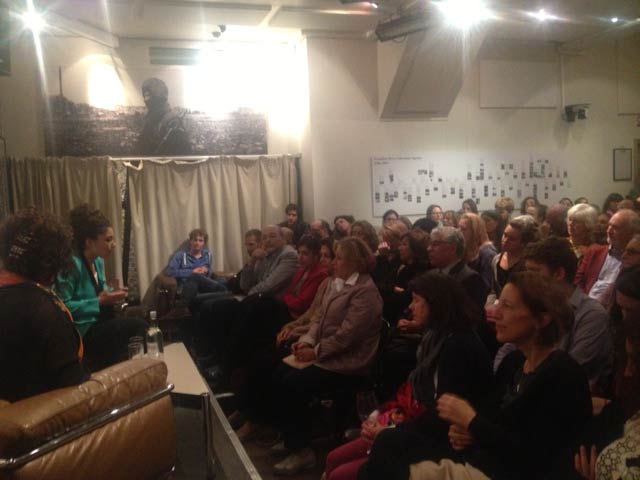 Abdalla told the audience that she had been surprised by how little resistance there was from the men in these women’s lives to her interviewing them.

“Because we were always in closed spaces, far away from anyone else, the women felt able to talk to me without restriction.”

When asked about her motivation for creating this film she answered “honestly I did not come up with the idea:”

“It was originally the UN Commission for Women who asked for a 15 minute film that was on women’s needs in the aftermath of the revolution. . . . People were obsessing about women post revolution, and especially in the Western press they were fetishising it and I felt very uncomfortable feeding in to that outlet. However, I soon realised that these women’s stories do need to be told and what they have to say is valuable. That is what motivated me.”

Hanan Abdalla’s next film is on women candidates running in Egypt’s first parliamentary elections after the fall of Mubarak.