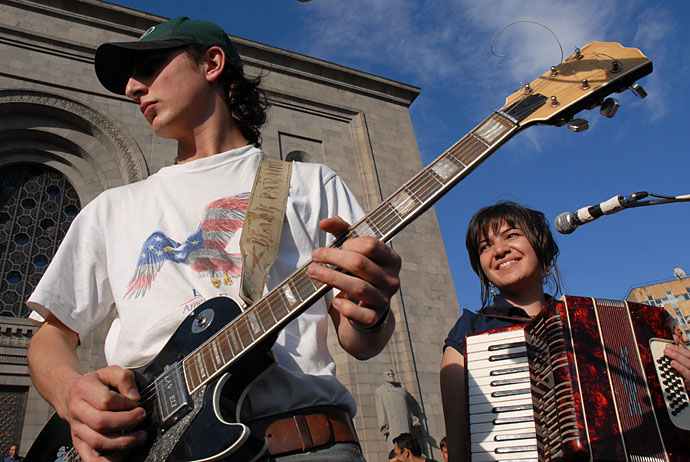 An opposition supporter friend and blogger calls it a travesty of democracy, but many of us are instead resigned to elections being business as usual in Armenia. Indeed, Josef Stalin summed up the situation perfectly. "Those who vote decide nothing; those who count the votes decide everything," he reportedly said, and after speaking to an American journalist who witnessed a count in one district of the capital, it seems like the Soviet dictator was spot on. Reporting that the opposition was neck and neck with the main governmental candidate for most of the time, the latter eventually overtook the former after ballot after ballot marked in his favour appeared towards the end.

Election observers in this part of the world usually take such a pattern to indicate probable ballot box stuffing. Occuring in an area which journalists reported was the most problematic in terms of vote-buying and other illegalities, such an assumption might not be far from the truth.

Of course, few of us are surprised. The municipal vote which would decide the first elected mayor of Yerevan in 15 years was just too important to leave to chance. Last night, for example, one diplomatic source said that the international community was expecting nothing more than the usual re-run of past elections which have been marked by vote-buying, ballot box stuffing and intimidation or violence. The fact that the Ministry of Foreign Affairs had invited representatives of diplomatic missions and international organizations to take part in a football match planned for the same day as the election was also pretty revealing, he said.

Ostensibly aimed at celebrating Republic Day, which was anyway marked on 28 May and not the day of the match, there was no similar event last year and the invitation came only on Friday — just two days before the vote. Needless to say, the source said he wouldn’t even grace such an open and blatant attempt to distract international representatives from observing the election with a reply. Not that it would matter anyway. With or without local embassies observing the vote, the handful of international observers dispatched to Armenia to monitor the election was so small it would never be able to uncover the full extent of any fraud which might occur.

Even so, they did pick up on many concerns before polling day.

Observers from the Council of Europe expressed “deep concern” about the conduct of Sunday’s municipal elections in Yerevan as campaigning for them officially drew to a close on Friday.

In a written statement, the CLRAE mission said that after holding a series of meetings with government officials, election candidates and the media it is seriously concerned about “various, repeated reports of irregularities, and in particular intimidation tactics during the election campaign.”

True, it’s unlikely that the majority of voters cast their votes for the opposition, but few believe that the main government candidate Gagik Beglarian, more commonly known to residents as Chorni (Black) Gago, won with the landslide the Central Elections Commission (CEC) is reporting. Instead, as voting was underway, RFE/RL reported that tension was high throughout the city as residents of other cities were reportedly bused in to vote, presumably for Beglarian. Meanwhile, other albeit still unconfirmed reports say that one person was shot at a polling station in a spat between two members of parties in the ruling government coalition.

For my own part, I didn’t see any ballot box stuffing, but nor did I expect to. Firstly, such things usually occur without journalists present and as Stalin’s quote implies, a lot can be done during the vote count and final tally in the precinct, territorial and central election commissions. However, there were some irregularities with police very present at the polling stations I visited.

At the first in my my neighborhood, for example, five were standing at the entrance to the school where PEC 5/25 was located. With a camera hanging from my shoulder and a bag on my back, they even approached me and asked who I worked for. Later, three policement loitered inside the polling station in contravention of the law and right outside the door voters would enter to cast their ballots.

Surprisingly, there was also no proxy for the opposition Armenian National Congress in the same station although when I asked an observer from adomestic election observation NGO he pointed to a man speaking to police standing by the door. When I asked him, however, he said he wasn’t from the ANC although the local opposition campaign headquarters just 20 meters away said there had been no problems in the polling station. Indeed, ANC proxies did not report any irregularities at all in any of the polling stations I visited, although all added that the day was not over yet. One ethnic Armenian from the Diaspora, however, reported that she had seen various examples of electoral fraud and implies that some opposition representatives were bribed to turn a blind eye.

Regardless, and even though there is nothing to indicate that the opposition would have won in a free and fair vote, it now remains to be seen whether the ANC can gather enough supporters on the streets tomorrow to force the CEC to overturn some of the results. However, as their final pre-election campaign rally attracted only about 5,000 people on Friday, it seems unlikely they will be able to assemble the 100,000 critical mass considered necessary to pose a threat to the regime let alone the average 20-25,000 that such rallies have attracted in the past.  Still, although they have ruled out attempting to oust the government through coloured revolution tactics, more will be known tomorrow at their rally already scheduled for 6.30pm Yerevan time.

Few are expecting it to amount to anything, though. Not only was it business as usual in terms of "democracy," in Armenia, but there can hardly be anyone
who really expected anything else. Most Armenians are resigned to the reality that elections have been falsified on a routine basis since 1995. Yet, if Friday’s final ANC pre-election campaign rally seemed was positive and even optimistic with a rock band opening the event also attended by two dozen opposition youth activists with the Armenian flag painted in the shape of a heart on their faces, tempers are now likely to be become heated. However,  it remains to be seen whether the opposition plans to relaunch a series of protests and civil disobedience of the type currently locking down the Georgian capital, Tbilisi. And even if they do, it is uncertain whether enough of their supporters will actually take to the streets. I’ll post any updates on the situation if and when anything happens. Until then, some photographs and video of the last rally held by the opposition last week are available on my personal blog.