The city of Da Lat lays in the highlands of Vietnam about 300 kilometers north of Saigon.  The 1,500 meters above sea level is a welcome cooling altitude to an otherwise stifling heat Southeast Asia is known for.  I am in Da Lat to honor family members of my girlfriend who have passed away.  A somber yet happy occasion as they reminisce of old times.

I have just met Ong Nuoi, who is slightly mentally disabled. He is the adopted brother of Bac Trai, my girlfriend’s father. Nuoi translates directly to: To nourish, to bring up, to feed, to breed.

Ong Nuoi had said the French bombed his village in the North and his family was killed. Bac Trai’s family figured he came to Da Lat with the French troops as a service boy because he able to speak a few words in French such as fork, knife, and plate.

When they asked his name he just said Nuoi. The family thought maybe someone was talking about taking care of him – Nuoi – so he thought that was his name.

When Ong Nuoi was of drafting age for the South Vietnamese army, he was at the training camp for only a week. He failed the minimum qualification test. When the soldiers were standing in a line, the officer yelled out commands. “Turn left”. Ong Nuoi turned right. He was sad for a long time. His only desire has long to become a soldier.

Ong Nuoi has always hated the Communists. When the North Vietnamese came into Da Lat, he stood out in front of the house and wore his South Vietnamese uniform from training camp waiting for the Americans to show up. They never did.

Now the family thinks Ong Nuoi is around 72 years old. He spends his days raising animals. Six dogs, two cats, one bird and several chickens. No one is allowed to eat the chickens. He sells the eggs to earn enough to buy food for the dogs.  A tear rolls down his cheek as he talking about the recent passing of a pet dog.

He lives quietly in his small bedroom outside of the house. He wears his US Army uniform as much as possible. He still longs for military service. 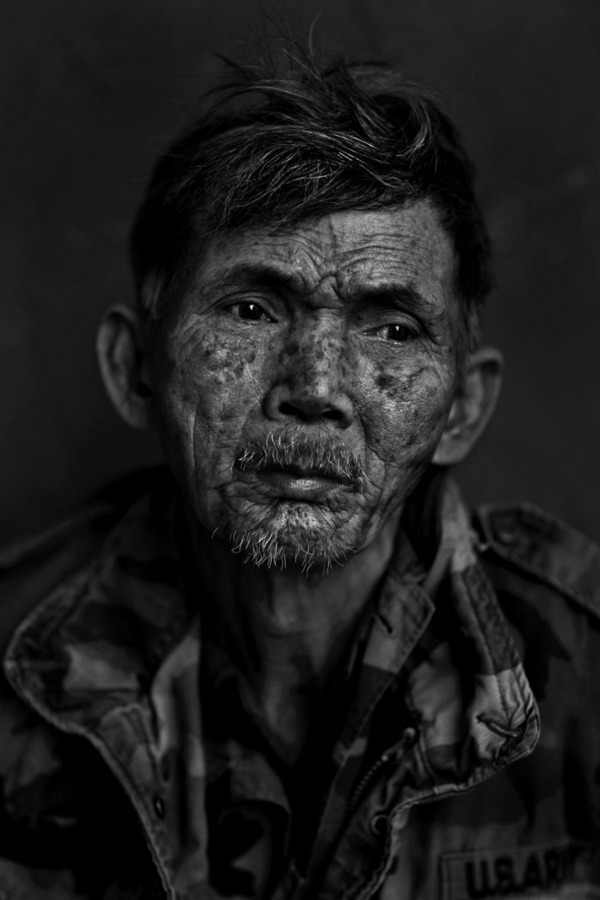