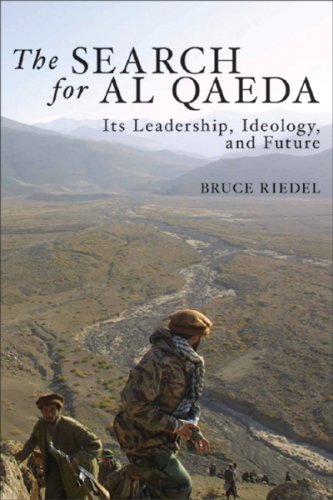 By now Bruce Riedel is pretty well-known, so I’ll spare you the CV: intimately involved in US foreign affairs in this general area (Afghanistan, Pakistan, India, Central Asia etc) he helped run one of the reviews of Afghan policy that Obama requested at the beginning of the year.  Nowadays he’s still quite active; writing, advising and so on.  He’s also the author of In Search of Al Qaeda: Its Leadership, Ideology and Future (pub. Brookings, 2008).

I put together some thoughts on his book, and some final thoughts on a recent essay he wrote for CTC Sentinel, the journal of the ‘Combating Terrorism Center’ at West Point.  Occasionally I’ll quote from the book and respond to things that he says.

In Search of Al Qaeda: Its Leadership, Ideology and Future was published in late 2008 and offers an outline of the author’s views on the threat posed by ‘Al Qaeda’ in the past, as well as possible ways to engage with the situation and “how to defeat al Qaeda”.  A short book, it is presumably intended for as wide an audience as possible, and as such it is not rigourously sourced, nor is the writing style academic in any sense.

It begins with an recap of the basic facts of the 9-11 attack, covering all the traditional details of the plot as well as outlining some of the conclusions that he wants to explore in the rest of the book.  The following four chapters are structured around four character he believes to be central to the story of al Qaeda, each representing a separate strand of that narrative: “The Thinker: Zawahiri”; “The Knight: Osama”; “The Host: Mullah Omar”; and “The Stranger: Zarqawi”.  He ends the books with some thoughts on the current threat as well as his plan for ‘defeating al Qaeda.’

The most puzzling feature of this structure – out of which he explains his conception of al Qaeda – is the inclusion of Mullah Omar as a fundamental feature (a full one quarter of the narrative) of al Qaeda.  The author of these comments has not read an account of al Qaeda to date which makes a claim as bold as this for the role that Mullah Omar played.  Nor have I heard any claims that Mullah Omar was involved (to whatever level – Reidel is frustratingly unclear) in the planning or strategic decisions that lead to 9-11.  This in itself is not evidence to support a claim, but I have been engaged in Afghanistan and in research on the issues relating to jihadism and Islamism for at least eight years and had not previously heard this claim.