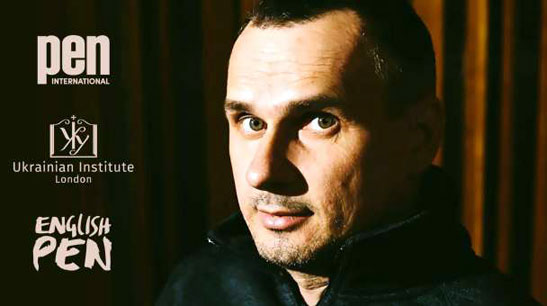 Join acclaimed Ukrainian film-maker and writer Oleg Sentsov in conversation with Natalia Koliada & David Lan, followed by a screening of acclaimed documentary “The Trial: The State of Russia vs Oleg Sentsov”.

Ukrainian director and writer Oleg Sentsov is from Crimea. When Russia annexed the peninsula, he was arrested and sentenced to 20 years in a gulag-style prison in Siberia on trumped-up charges and became the face of Ukrainian struggle against Russia. International filmmakers, human rights organizations and activists from across the world all fought for his release.

On September 7th 2019, Sentsov was set free as part of a prisoner exchange but he cannot return to Crimea.  In an exclusive UK event he will be in conversation with Natalia Koliada & David Lan about life as a filmmaker, director and writer, and what he hopes the future holds.

This will be followed by the screening of the acclaimed documentary by Askold Kurov: The Trial: The State of Russia vs Oleg Sentsov. In his documentary, Kurov investigates the truth behind this political show-trial and documents the courageous way in which Sentsov defends himself, as well as his response to the verdict with an emphatic denial of the crimes and instead holds up a mirror to those holding him behind bars.

David Lan is a writer, producer and social anthropologist. He was writer in residence at the Royal Court 1995 to 1997 and artistic director of the Young Vic 2000 to 2018. He is currently Theatre Associate at BAM in New York. His memoir “As if by Chance: Journeys, Theatres, Lives” will be published by Faber and Faber in early 2020.

PEN International is the world’s largest association of writers, championing the freedom to read, to write, to share literature, ideas and information without fear across the world, for close to one hundred years. Our campaigns, events, publications and programmes aim to connect writers and readers wherever they are in the world. PEN International’s and its Centres have been campaigning for Oleg Sentsov since his arrest.