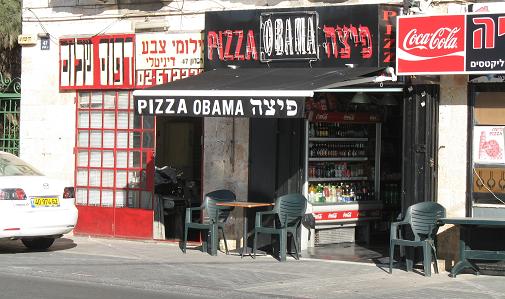 Shashank has resurrected Obamarama over at his Somewhere in Africa blog so after a couple of weeks driving past Pizza Obama I decided to pay the place a visit.

It had a fridge full of beer and racks of thin crust pizza – along with a Kosher certificate and what I have learned is a mezuzah. The name was popular at first but less so now that Washington has managed to displease both the Palestinian Authority and Israeli government over the issue of settlements.

"I have customers from both sides," said owner Isaac Azencot. "Now they are all telling me I must change the name."

There’s no chance of that though.

"Maybe there will still be peace and everyone will be pleased," added Isaac.