Obama and the Armenian Question 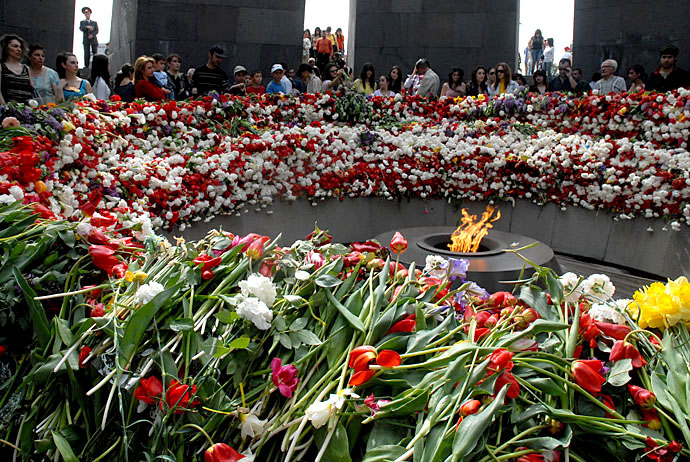 Campaign promises should always be taken with a pinch of salt, perhaps, but the election of Barack Obama as the 44th President of the United States has many in Turkey concerned. In particular, Obama’s promise to recognize the massacre and deportation of as many as 1.5 million ethnic Armenians living in the then Ottoman Empire as genocide has Ankara worried.Â
Armenian-American lobbying groups in Washington are already frantically active with 24 April, the day traditionally marking the 1915-17 massacres,Â just around the corner. Although previous U.S. presidents had reneged on their own campaign promises to recognize the genocide, groups such as the Armenian National Committee of Â America (ANCA) expectÂ Obama to buck the trend set by his predecessors.Â

With the Obama-Biden Administration and new Congress now in place, we have the best opportunity in years to end Turkey’s gag-rule on American recognition of the Armenian Genocide.

We are, of course, looking forward to President Obama honoring his pledge to recognize the Armenian Genocide, and are turning to you to help build support for proper Congressional recognition of this crime against humanity. link

There’s just one problem.Â
Following last year’s much publicized “football diplomacy,” many analysts and officials in both Yerevan and Ankara believe that relations between the two estranged neighbours could be normalized this year. Recognizing the genocide in the U.S., however, could not only set back such unprecedented progress, but also risks igniting a nationalist backlash in Turkey itself.Â
Turkey’s strategic importance for the U.S. also remains significant, and some would argue even more so in the aftermath of the August 2008 Russia-Georgia war. Normalized relations between Yerevan and Ankara, for example, would greatly assist efforts to negotiate a lasting peace between Armenia and Azerbaijan and provide a regional counter-balance to a resurgent Russia.Â
Writing for the German Marshall Fund’s Real Clear World, Amberin Zaman, The Economist’s Turkey correspondent (and coincidentally the wife of the U.S. ChargÃ© d’Affaires in Armenia), summed up some of the issues which will likely weigh on Obama’s mind and influence his decision, while also warning both Yerevan and Ankara not to be complacent about the future.

The prevailing wisdom in Ankara, Yerevan […], and Washington alike is that […] no U.S. administration has been as predisposed to genocide recognition. […] Mindful of such dangers, Turkey last year revived attempts to make friends with Armenia and in September, Turkey’s president, Abdullah GÃ¼l, became the first Turkish leader to set foot in Armenia. Turkish and Armenian diplomats have been quietly working on a deal to establish formal relations and to re-open their common border […]. After some initial wobbles, Turkey is said to be ready to re-open the border and to go along with Armenia’s demands that the proposed historical commission be addressed within a broader set of bilateral issues. Turkey believes that all of this should stave off genocide recognition by the new U.S. administration. That is why hardliners within the Armenian Diaspora seem bent on stopping Turkey and Armenia from making peace. For all the conciliatory noises coming out of Yerevan, some Armenian decision-makers may believe that Obama’s victory means Armenia can push for even greater concessions from Turkey. That would be a gross miscalculation. For starters, if Obama is serious about tackling Afghanistan and pulling out of Iraq, then the United States will need Turkey more than ever before. Incirlik will probably be one of the main exit points for U.S. soldiers being rotated out of Iraq. Turkey has some 1,500 troops in Afghanistan; more could be tapped, though the Turks rule out any combat role. Indeed, many predict that once in office Obama will be more of a pragmatist than a liberal.

The new U.S. administration is therefore unlikely to make the genocide resolution a priority. […] Obama’s transition team should coax Armenia into accepting Turkey’s offer before its too late. At the same time, it should remind Turkey that the security card has its limits; the longer Turkey and Armenia remain at odds, the more likely it is that the genocide resolution will pass, and with it an opportunity to curb Russian influence and to bring calm and prosperity to the Caucasus. link

Yerevan-based Armenian-American analyst Richard Giragossian agrees, pointing out that “such campaign statements were neither particularly new […], reflecting the political considerations facing every […] candidate for national office. […]Â Turkish perception of the pro-Armenian bias of Obama […]Â must be noted and duly corrected quickly.”Â Turkey’s newly won position as a non-permanent member of the UN Security Council might also sway minds in Washington.Â

Photo: Armenian Revolutionary Federation –Â DashnaktsutyunÂ (ARF-D) burn the Turkish flag, Yerevan, Republic of Armenia Â© Onnik Krikorian / Oneworld Multimedia 2008
But, as the co-chair of the Turkish-Armenian Business Development Council stated in a recent interview, “the hard-line, nationalistic part of the diaspora will be heard much more because they speak so loudly.” For them, some observers argue, security and economic issues confronting Armenia are not as important as demands for lands now inhabited by many more Turks and Kurds.Â
Others, such as Taner AkÃ§am, one of the few Turkish academics to recognize the massacres as genocide, instead argue that new approaches need to be adopted. This seems particularly relevant as Turkey slowly opens up as part of its EU membership bid and its aspirations to form a Caucasus Stability and Cooperation Platform in the aftermath of last year’s war between Russia and Georgia.

[…] Akc
am argues that a long-term solution requires much more than a U.S. resolution. He says two steps are necessary: Turkey and Armenia must establish normal relations, and Turks must learn that confronting their history does not threaten their Turkish identity, but strengthens it. This means that Turks should look at the conflict not as a zero-sum game in which any Armenian gain is a Turkish loss, but as a necessary part of the process of becoming a democratic nation. It’s an approach to resolving bitter historical grievances called “transitional justice,” and it has been effective in helping resolve historical grievances between Germany and the Czech Republic, within South Africa and in other places.

Such arguments, however, are lost on more nationalist elements such as the Amenian Revolutionary Federation — Dashnaktsutyun (ARF-D). The youth wing of the party whose main support base is in the Diaspora has already started up an online petition to oppose the normalization of relations with Turkey as well as disrupt negotiations to reach a peace deal with Azerbaijan over the disputed territory of Nagorno Karabakh.

In recent months, the Armenian government has signaled an imminent shift in its posture toward Armeno-Turkish relations. The AYF believes that government’s approach may be significantly at odds with Armenian national interests.

The petition addresses reports of possible concessions being considered by the Armenian government as it seeks to normalize relations with Turkey and Azerbaijan. In it, the AYF asks for the community’s support to stand against:

A possible bilateral commission to examine the issues surrounding the Armenian Genocide;

An imminent deal to concede the liberated territories of Artsakh as a precondition for a settlement with Azerbaijan;

A growing role for Turkey as a broker in the Transcaucasus, and specifically over the Karabagh negotiations.Â

At time of writing, however, the petition has 561 signatures while a Facebook group has even less — just 194 members. Moreover, as a member of the ruling coalition in Armenia, critics are quick to point out that the ARF-D is ironically part of the same government seeking to achieve the objectives it opposes, but which the U.S. and Europe consider vital for stabilizing the volatile South Caucasus.
Regardless, as Armenian and Turkish lobbying groups engage in a war of words, it remains to be seen what Barack Obama decides. True, few doubt that the events of 1915 were genocide, but will Obama put U.S. foreign policy and possible rapprochement between Armenia and Turkey on the line to publicly state that while in office? The answer, it would appear, seems obvious, but we’ll know for sure in a little over two months time.
Top Photo: Tsitsernakaberd Genocide Memorial, Yerevan, Republic of Armenia Â© Onnik Krikorian / Oneworld Multimedia 2008