First impressions of the Nokia N82 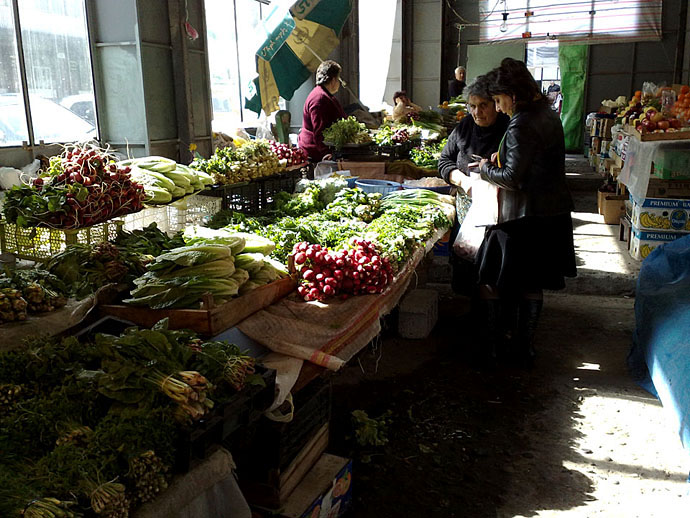 Have no doubt about it. Frontline Club blogger Guy Degen has plenty to answer for. Not only has he been pretty much showing off in recent posts on this blog about streaming live video in Africa from a Nokia N82 mobile phone, but he even had the audacity to rub salt into the wound by actually doing the same in the neighbouring Republic of Georgia while I was left sitting sick as a parrot a few hours away in Yerevan, Armenia.

Yes, Guy Degen has a lot to answer for indeed, and not least because as my old mobile was recently and inadverently fell into the bowl of a toilet during a flush cycle on a somewhat drunken night out, there was no way I could sit idly by any longer. Yes, Guy had to go and confuse things even more by suggesting I might want to take a look at another model in the Nokia lineup, but ultimately, my appetite was whet to the point of no return.

Fair enough, Guy’s work is indeed impressive and shows the potential for mobile video to move in and fill the gap in countries such as Armenia where there is no independent media, but I’m also not used to shooting video so I’m now lumbered with even more problems to overcome. In fact, about the most I’ve every done is record two low quality 30-second clips of my son on my old Sony Ericsson K750i.

As a photographer, however, I do expect the highest quality images possible, even from a phone, so if I did go for a Nokia N82 there’d be hell to pay if it didn’t deliver. So, as a way of informing readers if Guys’ advice and posts are actually worth the time it takes to read them, I finally took the plunge and will now offer my initial impressions after using the one for a few days. Even the first other tests of my son in awkward and contradictory lighting conditions were satisfactory enough.

So, as I’ve said, the quality of the camera in any device which has one is my main concern. Indeed, I’d even consider buying a phone which is totally useless for the primary task if was intended if it had a decent camera inside and on that score the Nokia N82 is very impressive indeed. In one of my first tests the day after buying it, I walked through my local market and started shooting. As you can see from the images above and below, even the huge contrast between direct sunlight and shadow rendered an impressive amount of detail.

Moreover, there is no sign of any chromatic aberration whatsoever and even though you might expect some – the window frame backlit against the bright sun outside, for example. The scene has also been exposed remarkably well all things considered. Compared to my old K750i, which I bought two years ago, and again based on the strength of the camera, the automatic white balance is pretty decent. True, the image is not high enough quality to be published half-page in a magazine, but it’s not bad for what it is.

Which leads me on to why I want a camera in my phone anyway. To begin with, with most of the main local and media outlets interested in the South Caucasus being of the online variety, huge high-resolution images shot on camera equipment costing $2-5,000 are not the order of the day and are actually surplus to requirements especially when you consider how low such publications pay. So, as a blogger, when I’m not on a commissioned shoot I need a device in my pocket that I can carry around with me always, but offering me at least a usable image.

Oh, and if that same device can also make and receive phone calls, well, that’s an added bonus. It’salso why I decided on the N82 over the N85 which is arguably a better phone, but is not as good in the camera department. The same is also true when it comes to video, although for night shots, the N85 is apparently second to none thanks to its dual LED illumination over the Zenon flash on the N82. Incidentally, the keyboard sucks on the N82 as well, but is at least usuable after some getting used to.

All that said, it’s worth pointing out that in no way can the N82 be considered a substitute for a dedicated digital camera, not that any of you were of any doubt. Even so, when you consider the following comparison between a 100 percent crop on a 10 megapixel DSLR (left) and the 5 megapixel N82 (right) it’s amazing what you can get. Moreover, considering that it is still after all just a phone, it’s not bad by any stretch of the imagination. Probably the Carl Zeiss optics have a lot to do with that although the sensor also matters. 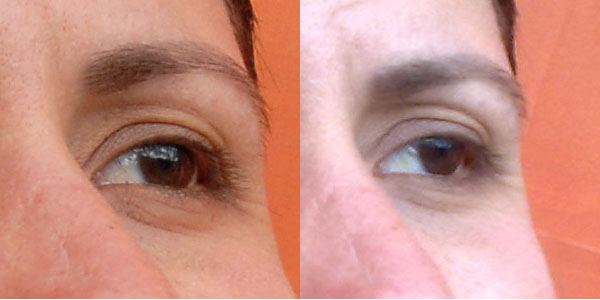 Well, there’s really not much more to say about the camera in actual fact given that there is very little in its operation that you can change. It either works or it doesn’t and it’s ultimately just a point and shoot at the end of the day. So, the main question still remains. Can it deliver usable images if the need arises and can it stream high enough quality video online in real-time in a backwater country such as Armenia to justify its $400+ price tag?

Well, what better way to find out than take it to an opposition demonstration as I did yesterday to put it through its paces?

Having shot too many opposition rallies over the past 10 years in Armenian, trying to cover yesterday’s meeting with a mobile phone wasn’t exactly much of a risk. Still, as they say, "trust in Allah, but tie your camel." Basically, take the backpack full of camera gear just in case, but as it turned out the main problem encountered was simply to have bewildered photographers I know approach me staring in disbelief. "Onnik, why aren’t you using a camera," one asked with a puzzled look on his face.

Yes, I admit. I must have undoubtedly looked stupid, but the "why" was easily answered. With the recent introduction of 3G in Armenia, I wanted to try the live video streaming in addition to seeing if images shot on the phone were good enough to use albeit only for online purposes. Well, it has to said, for 90 percent of the time, it was. Although the white balance was a little disappointing in overcast situations, and especially in shadow, that’s nothing Photoshop can’t put right.

In sunlight and even indoors, however, it was pretty damn good.

Instead, perhaps the main problem with the phone was it missing focus on two occasions. To be fair, that was probably my fault and something that can be rectified by understanding how it works. Otherwise, even in direct sunlight I could see the phone’s display well enough to frame a shot, something that the otherwise impressive OLED screen on the N85 apparently fails miserably with. Still, the phone did unexpectedly lock up at one point. to the extent that whipping out the battery was the only way to resolve the issue.

Another problem, of course, was battery life. Shooting about 50 images, reviewing them, checking the Internet to make sure they had uploaded to Twitpic, live streaming about 30 minutes of video a
nd searching for wi-fi connections as well as, um, making a few phone calls, only gave me about 3 hours of battery life. Probably, a second battery is probably a must. Also, it’s not a good idea to reduce the quality of the video to be streamed on Qik in the hope that  it can minimze lag. In reality, having a delay of anywhere between 1-2 minutes instead of 10-20 seconds is nothing really.

Besides, Qik appears to buffer images and sends according to the connection speed. This is probably a good idea given that my carrier only introduced 3G services 10 days ago. When more 3G phones materialize in Armenia I’m sure that the connection speed will decrease dramatically. For now, however, live streaming via mobile is possible and actually quite exciting. Yes, Guy Degen, you’ve made another convert!

However, all that said, I probably won’t use it much for two reasons. Firstly, because unless there is a major breaking story there is no need to stream live, and secondly, because doing so isn’t very interesting for the viewer unless you know how best to present it and here again Guy provides a good example.

Turning the camera on himself to provide some narrative as well made up for some of the problems associated with Qik streaming on a mobile such as actually stabilizing an image, for example. However, after spending 15 years behind a camera or a byline, the idea of now being in front of one does not appeal even if yours truly is in control. Still, if I’m to do any video reporting from Armenia it has to happen, but it will take some time getting used to.

All of which should provide the answer to the question that this post seeks to ask. That is, can the Nokia N82 produce quality images and video for use online? Without any doubt the answer is yes. Sure, it won’t replace any of my gear for "proper" photographic work, but for those occasions when I don’t have my camera bag with me, I can be confident that I have a device to hand which can deliver usable images.

Moreover, for those who only work online, and especially on blogs, I can’t recommend this phone enough. Of course, don’t take my word for it, and take a look at some of the test images I shot on my personal blog and at the larger versions, although not full resolution, below. Oh, and I suppose I’d better thank Guy for not only setting the precedent for mobile reporting in the South Caucasus due to his recent ground-breaking work in Georgia, but also for turning me on to the N82 in the first place.

Thanks Guy, and as Ali G would say, respect. 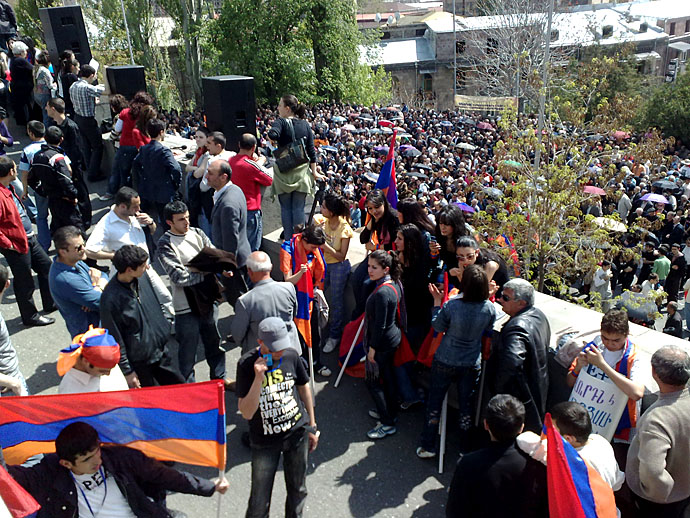 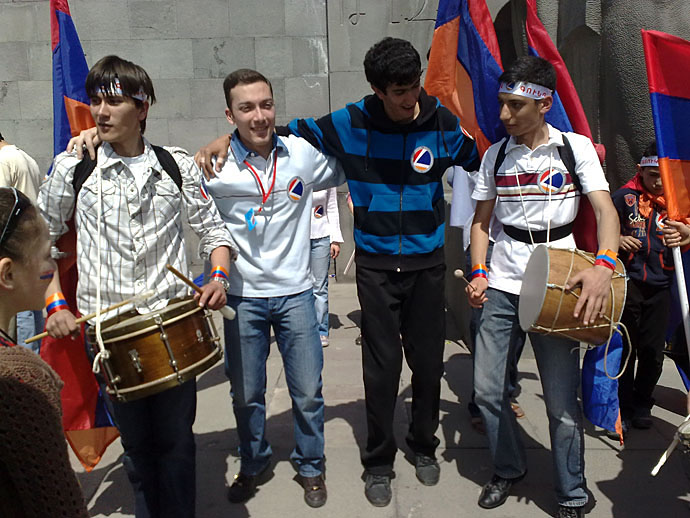 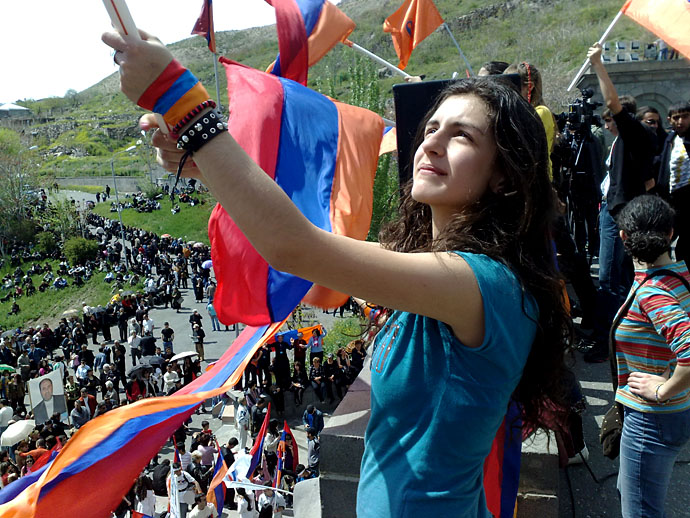