News and information security in the digital age

Social media was on the agenda, and Rohozinski honed in on regional networks and their role in the information available.

“Three hundred million – that’s how many people are on Twitter,” he said. “It’s fair coverage, but it’s proportionally pretty small. Secondly, it tends to be quite specific to specific regions. If you’re doing something domestically, meaning Europe/North America, it’s probably pretty good. Twitter in Uzbekistan, I wouldn’t say, is the most reliable source. In fact, I think that’s the danger of platform dependence.”

Rohozinski also said people focus on particular networks or platforms at their own peril, noting that technology is fickle and can change at any time.

“Imagine yourself, at BBC, if you had made the decision three years ago that MySpace was going to be the platform that you were going to get the most of” he commented to the evening’s moderator Robin Pembrooke, who is the head of product at BBC News Online. “Where would you be today?” 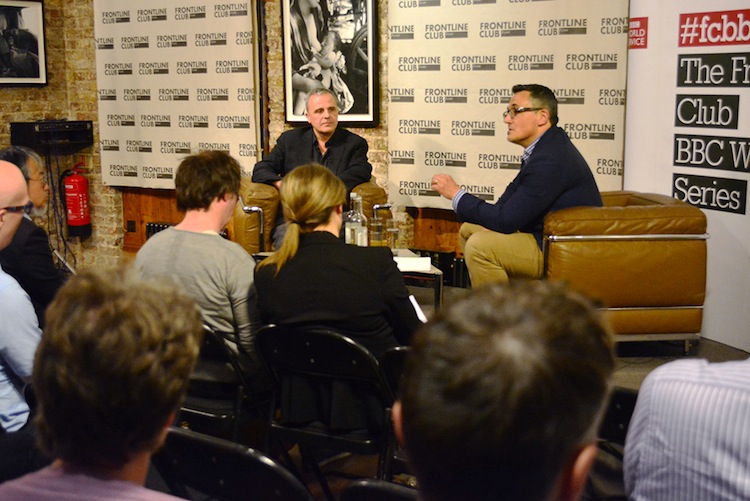 Pembrooke also noted during the course of the evening that he has noticed a shift in the pace of change over the last couple of years.

“I know this is a bit hackneyed, with people saying the pace of change is ever-increasing, but it really is. . . . I mean, in terms of the distribution technologies, the surveillance technology – Twitter’s only been around, how long has Twitter been around for, four, five years – the explosion of all of these regional products.”

Another point Rohozinski mentioned was digital governance, and the emergence of political, linguistic and economic borders that are more defined through digital spaces.

For example, he noted that in Kazakhstan people have a choice between the social media platform linked to Kazakh Telecom, Namba or Facebook, but the former is at a flat rate to use through data where you have to pay a premium price for Facebook. He also noted that China and Russia also have their own regional networks.

"Google might rule the world but it certainly doesn't rule China" – @rohozinski pic.twitter.com/NdVV2z4GOh

Rohozinski also spoke about how to get information from those networks, using data mining tools and knowing how to dissect what comes out.

“I think that we’re kind of in a Wild West situation right now. . . . There’s a lot of experimentation being done by a lot of different people. Interestingly enough, there are people from the technology community that are trying to guess what it is that, for example, the journalist community wants to do. At the same time, there are people coming out of the journalist community, embracing technology and seeing how we can actually crossover the other way.”

Rohozinski said those who inhabit cyberspace come from a very specific, young demographic. He noted that their trends and preferences online will really shape news products.

“Two-thirds of those who are online globally are under the age of 35. . . . Fifty per cent are under the age of 25. This is the youthful demographic. . . . Eighty per cent of those are users of social media, by the way. The important thing is this – that this is the generation that has the most to lose and the most to gain by not changing the circumstances of their life. This is where the ambitions of childhood meet the structural barriers of adulthood.”

Watch and listen to the full event here: