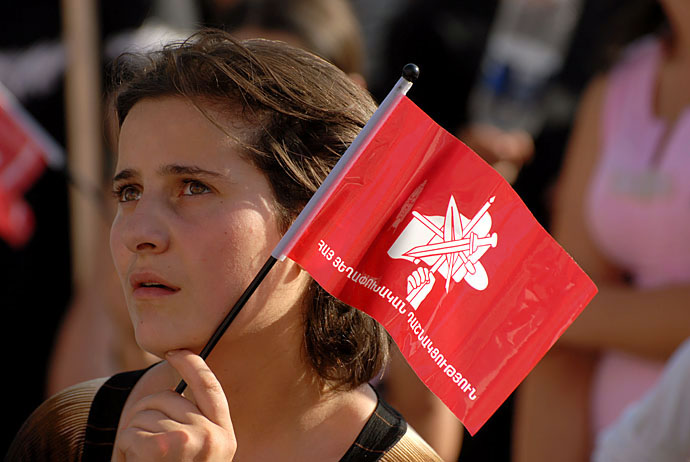 Nothing is ever simple in the South Caucasus, and no sooner had world leaders hailed a ground-breaking announcement from Armenia and Turkey that might set the scene for the normalization of relations between the two estranged neighbors, than nationalists throughout the region became agitated. Here in Yerevan, the Armenian Revolutionary Federation — Dashanktsutyun, for example, announced that it would leave the coalition government it has been supportive of for over a decade.

True, what appears to be U.S.-led efforts to bring the Armenia and Turkey together was always going to to irk the party which still lays claims to territory not only in the country’s western neighbor, but also in Azerbaijan and Georgia, but despite similar threats in the past, this has been the first time the ARF-D appears to have followed through. On Monday, the party formally announced its departure from government.

In a written statement, the Dashnaktsutyun leadership in Armenia reiterated the nationalist party’s condemnation of an agreement on the normalization of Turkish-Armenian relations announced by the two governments on Wednesday. “We also have fundamental disagreements with the Armenian authorities’ position on some issues raised during Armenia-Turkey negotiations,” it said. link

That the party has lasted this long in government is more of an issue, however, with many of its supporters believing that the move long been been overdue. Banned in the mid-90s, allegedly for forming an armed gang in preparation for a coup d’etat planned to oust Armenia’s first president, now extra-parliamentary opposition leader, Levon Ter-Petrossian, the party rose to power through unflinching support his successor, Robert Kocharian.

A decade of falsified elections, spiralling corruption, human rights abuses and a 20-day state of emergency declared after last year’s post-election clashes which left 10 dead, the party now seeks to position itself as a "constructive" alternative opposition to a government it has otherwise loyally served. Yet, coming as it does just a week before the start of the campaign period for next month’s crucial municipal election in the Armenian capital, others are not so convinced.

Seeking to attract the votes from those disgruntled by the authorities has been a feature of the ARF-D in every local, parliamentary and presidential vote since 2003. And this being Armenia, where opposition parties and their supporters are often subject to attacks and intimidation, many will not truly take the party at its word until there are signs that the authorities plan to frustrate and disrupt their activities.

However, while two opposition youth activists and one online journal editor were attacked and beaten this week, the ARF-D instead appears to enjoy a special relation with its former colleagues in power. Although leaving the government ostenibly because of disagreements over foreign policy, they have also been allowed to retain control over two key parliamentary sub-committees. The move has raised eyebrows among members of the traditional opposition in Armenia.

Read the rest of this post on Onnik’s blog.