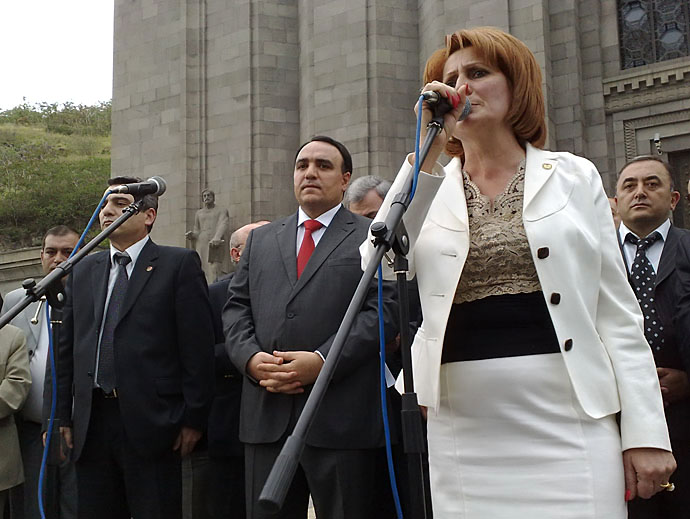 Finally a real opportunity to put the Nokia N82 to the test. Deciding to quickly pass by Yerevan’s manuscript museum to see if the 13th Century replica ship blocking the entrance to the main venue for the opposition to stage its rallies had been removed, I wandered into what can only be described as a swarm of people converging on the same location. Obviously, it was something to look into as such sights are not normal in the capital.

Yes, there’s just a few days to go before a crucial municipal election which might prove to be the first test of the country’s democratic credentials since 10 people died in clashes between the opposition and the police last year, and I should have been prepared, but wasn’t… or was I? After all, that’s why the work of fellow Frontline Club blogger Guy Degen in Tbilisi last month with a mobile phone pushed me to go out and get the Nokia N82.

I might not have had my backpack with kilos of camera gear in it today, but I did have a phone in my pocket. And while I have been using it more and more at pre-election campaign rallies in tandem with the Nikons, this was the first real time when it was the only camera I had. So, how would it perform?

Well, there is no exact answer to that. In direct sunlight there’s no problem, but when the light starts to go, acquiring focus is neither quick or easy. Noise in images isn’t too much of a problem even in low light, and anyway nothing that can’t be sorted out easily enough with Neat Image, but as the clouds gathered and the rain started to fall there were some out of focus shots. All that said, however, without the N82 there would have been nothing. Moreover, perhaps the worst problem I enccountered during today’s rally by Orinats Yerkir’s mayoral candidate, Heghine Bisharyan, was not any of the above, but actually shooting with a phone in the first place.

In fact, she didn’t seem to like it at all and actually confronted me at one point demanding to know why I was taking photos. A normal response would have been simply that I was just passing by, I’m a journalist, and my camera gear is at home, but I’ve learned well to instead feign ignorance and respond in English. "Sorry, I don’t understand," I said while Bisharyan, who often reminds me of a post-Soviet equivalent of Margaret Thatcher, reluctantly allowed me to carry on. True, I should have asked her a question or two back.

You know, something like, "Don’t you like people attending rallies, during which you’ll appeal for their votes, to take photos of you? You’re an election candidate, after all, and in the public eye."

Anyway, I didn’t shoot any video, but not because I couldn’t or because there are problems in this area with the Nokia, but rather because I’m primarily a photographer and also because the rain pretty much stopped the rally soon after it started. People had been waiting for an hour by the time Bisharyan and party leader Artur Baghdasarian arrived, but after about 30 minutes of saying nothing in particular they abruptly called the rally to an end just before the heavens opened up.

Nevertheless, it provided me with yet another field test for using a mobile to cover an event, and while not perfect, I got my shots. And, of course, it’s not just about photos, it’s also about sending out tweets and sometimes getting confirmation from others about observations on the ground.

Anyway, I have to say that I’m really interested in the idea of online journalism combining tweets as well as blogs and comments. A perfect example of this can be seen in a recent post I made for Global Voices Online on the 10 May youth protests in Baku, Azerbaijan. Not only did Twitter alert myself and others to the detention of youth activists and bloggers, but tweets also provided part of the content. Blogs and video uploaded to YouTube filled in the gaps while as a journalist I could set the context.

Incorporating still images, video and short excerpts of text, I think it says more than any article on its own, but please, don’t get me wrong.

As a journalist, I’m also a firm believer in comprehensive and thorough reporting, but there’s also no doubt there’s a place for many mediums to be brought together to tell a story in more approachable and understandable ways. Moreover, in a region such as the South Caucasus where local journalism can often be more fiction than fact, such an approach can also validate the story and provide compelling evidence of what might be reported in any article.

Besides, if a publication is online, isn’t it now as easy to add photographs and video as much as it is to post text? And as all of this is now possible even from a mobile phone it’s definitely not a matter of cost.

Oh, and btw: please excuse the typo in one of the tweets above, although I’m not sure if it was just a simple mistake with the T9 predictive text input or a Freudian slip. Then again, after a decade of covering elections in Armenia, perhaps it was predictive after all…