May you live long, but not here 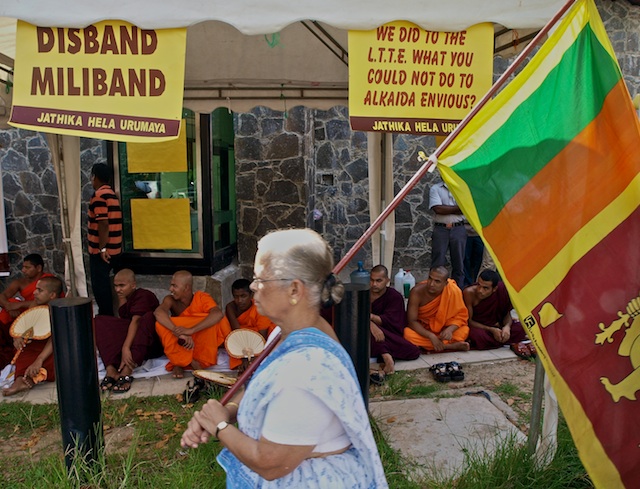 "Ayubowan", is the first word a visitor to Sri Lanka hears on arrival. These days one could be forgiven for thinking it means something very rude. It doesn’t, and the increasingly rare tourist would probably not suspect any hostility behind the still ever-present smiles. Until, that is, she or he makes the mistake of picking up a local newspaper. Traditionally fairly diverse, most Sri Lankan media outlets now speak with one voice to the "International Community", and the message is not "ayubowan", it’s "mind your own business".

Increase the impact of the culture shock by going to cover what appears at first sight to be a peaceful demonstration against Foreign Secretary David Miliband by orange-robed buddhist monks in front of the British High Commission in Colombo. Nothing much to photograph (most people smile at the camera and ask where I’m from), and I soon get sleepy from the buddhist chanting and incense. I wake up when the monk speaking into the microphone switches to English. It turns out his rhetoric is somewhat less than peaceful, and within minutes he has concluded that Miliband "represents terrorism" and has come to Sri Lanka to rescue LTTE leader Velupillai Prabhakaran. The monk, who has stopped smiling at this stage, gives no reason as to why Miliband or any reasonably sane individual or nation would want to rescue a Tiger with a reputation as spotty as Prabhakaran’s. Some of the banners do though, by suggesting that Miliband is jealous of Sri Lanka’s apparent success in "wiping out terrorism".

Granted, the monks at the High Commission are from the JHU, a small-ish Sinhala buddhist political party that rises to the surface by stirring up a murky brew of religion, nationalism and anti-pretty-much-anything-else propaganda. But the same recipe seems to also work well for other, more moderate Sinhala buddhist Sri Lankans. There is very little real debate about the war. Politicans and local media have all draped themselves in the flag to combat their two main enemies. The main foe is the Tamil Tiger, now threatened by the process of "eradicating terrorism", a term much loved by the spin doctors. The other enemy would appear to be us. In the eyes of many Sri Lankans, the international community has become an international conspiracy. Foreign governments, the UN, NGO’s of all kinds, and of course the media are treated with suspicion and disdain. Many of the ever smiling Sri Lankans seem to genuinely believe that we are at best incompetent, and at worst have a hidden agenda. Hence, we the media simply aren’t allowed to cover events in and around the no-fire/combat zone, and the "welfare villages"  where the internally displaced are being held.

So when the Swedish Foreign Minister gets snubbed and leading international officials are vilified, there are, in the minds of many here, good reasons for it. More surprising perhaps is that many of the young and educated have wrapped their heads in the same opaque flag. The other day Indi Samarajiva, a brilliant young Sri Lankan Canadian American blogger publicly dismissed my colleagues and me as a "tourists". And he didn’t even smile and say "ayubowan".