May the Mastiff be with you 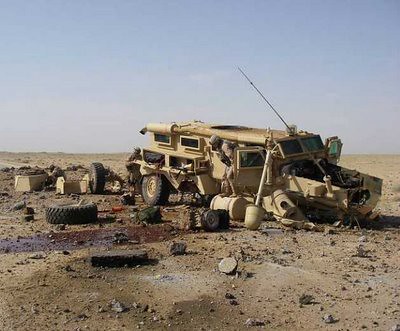 Yesterday Frontline Club head honcho, Vaughan Smith, met the blast-proof ‘Mastiff PPV’ for the first time. As 25 tonne, Â£265,000 combustion engine powered vehicles go, it’s rather impressive. Introduced in September 2006, the gargantuan armour plated truck is quite literally a lifesaver, according to the Royal Tank Regiment’s Corporal Upton who speaks in Vaughan’s video report. The EU Referendum blog, from where I borrowed the above picture of a sister truck to the Mastiff, says

The crew [in the picture] escaped with only minor injuries and no one was killed, even though the blast ripped the engine from its armoured bay and hurled it over 100 yards…

EU Referendum has more pics and more detail on the alarming vehicular situation for British troops and more accounts of the Mastiff’s lifesaving qualities. The Mastiff was introduced a fraction too early to join the ranks of the World’s most expensive cars, but we fully expect to see it making an appearance on 2008’s list alongside a starring role on the boulevards of Beverley Hills if the humvee headcases are anything to go by.