Maintaining the line of ethical journalism 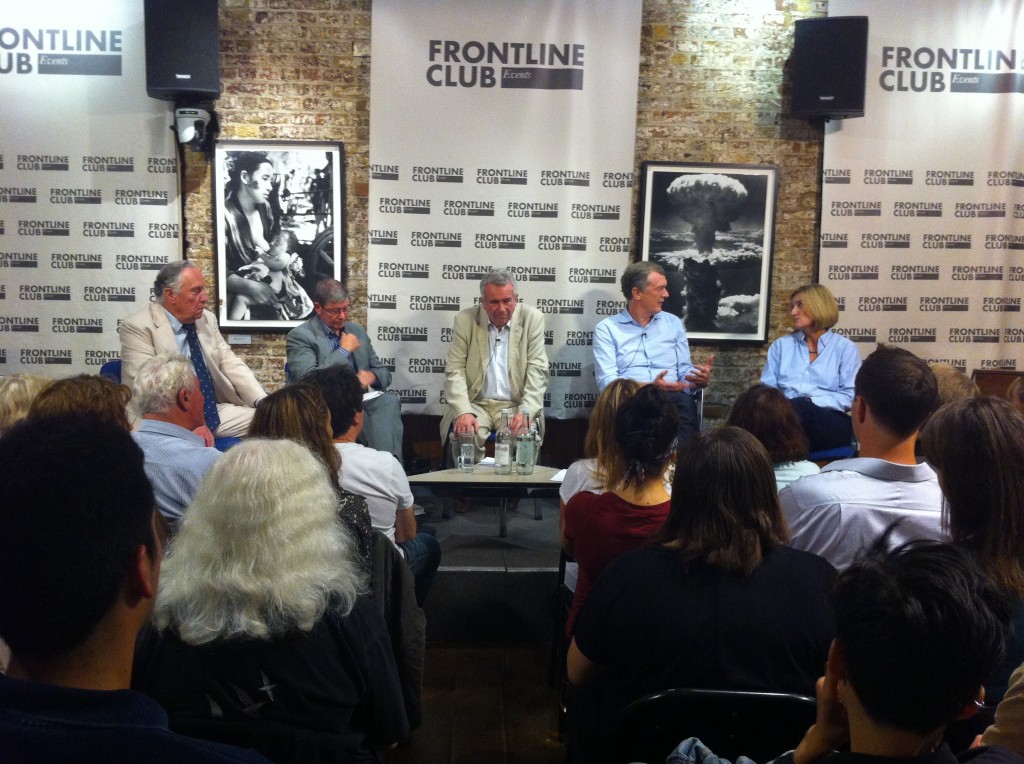 A wide-ranging talk took in Marshall’s defence of a story on Bosnian war atrocities, Forsyth’s experiences of reporting the Biafra massacres in Nigeria, and a variety of other issues associated with reporting under pressure.

The product of meticulous archive research, Purvis and Hulbert’s book covers a range of situations in which lines might be crossed.

“No one has ever defined what the line is,” said Purvis. “We found that there are lots of lines.”

Touching on the issue of protection of a journalist’s sources, Hulbert suggested that while this is important, there was also a responsibility for a journalist to be held accountable for their reporting:

“It’s a little debatable from the archives whether the stories actually held water. . . . At no point have lawyers said to journalists ‘you made it up mate’. They just allowed the innuendo to percolate.”

In 2000, ITN won a libel case against left-wing magazine Living Marxism that had claimed that Marshall, along with others at ITN, had fabricated a report about a Bosnian detention camp.

“The supposed motives were variously that we were in it to win it, were vain, wanted an award, or worse had an anti-Serb agenda and had gone out to see what we wanted to see and wasn’t there,” she explained. “What ensued some of the bravest defending of our journalism.”

Marshall admitted though that in the heat of a situation the lines are not always clear cut:

“In the field the lines are blurred,” she said. “It’s easy for regulators and for academics who are not in high stress situations. But in these situations you have to rely on the seasoned judgement of journalists. I held hands with a lost child. I showed I cared . . . we’re not robots. If you don’t care, don’t be a journalist.”

A more difficult line, said Marshall, was the extent to which sources of stories should be put at risk:

“I’ve always worried that some of the people who were in our report lost their lives because of our endeavours to show what was happening.”

Forsyth said that he had crossed “three lines” during the course of his career. The first was taking a job as the BBC’s assistant diplomatic correspondent at the age of 28 and realising he had not only “inadvertently joined the establishment”, but was also “expected to serve it”.

The coverage he was expected to produce of the Nigerian-Biafran war in 1967, he said, was “strongly biased”. The second line was his decision to walk out on his post without notice and board a plane to Biafra, where he witnessed what he described as “a deliberately concocted and organised famine.”

“It was the only time our government has assisted a foreign government killing its own citizens,” he said. “Why? Because of the massive vanity of senior civil servants who could not and would not be proved wrong.”

Others on the panel agreed that journalists are often under the pressure of editorial agendas.

“I’ve become more sceptical about impartiality,” said Purvis. “You have to ask whether the coverage of Libya [of the overthrow of the country’s leader, Colonel Gaddafi, in 2011] was really balanced. And yet the only channel that was criticised for bias was Russia Today, and that was for being pro-Gaddafi.”

“I don’t think there’s any major story where you can avoid bias. There’s almost always two sides to every story. The establishment is not the friend of dispassionate reporting because it wants its version to dominate and that may well be the wrong version.”

The issue of celebrity among broadcast journalists was also a source of concern.

“There are a number of celebrity journalists who have thrived through their celebrity,” says Hulbert. “Some I imagine would be able to gain entry to worlds that mere mortals such as I wouldn’t, so I think it helps. But whether it’s that celebrity emerges from the quality of your work or whether it emerges from a desire to be a celebrity depends on the individual.”

Marshall argued that one advantage of broadcast journalism is that many potential elements of bias are plain for all to see:

But the confines of the mainstream news agenda remain an issue, Marshall continued:

“The agenda is so narrow now which I regret. My children’s agenda is much wider than the news we’re feeding them. It’s part of a bigger disconnect between Westminster and the public and the media and the public.

The space for independent journalism, meanwhile, is shrinking. As Michela Wrong, a former Financial Times and Reuters journalist commented from the floor:

“It’s about how you see the world. If you go to an Angolan diamond mine with a diamond company, or with Oxfam, or on your own, you’re going to have three completely different experiences. There’s not really any room for independent journalists to cover a story now.”

In the end, says Marshall, it is down to the journalist to hold themselves accountable for their stories, and to be transparent about any lines they may have crossed.

“You want the sort of journalists who cross lines because the best journalists have the will to bring Biafra to account. But they also need to know that when they cross lines they can admit to doing it and are prepared to explain themselves.”