Louis Lewarne: We were in awe of the Egyptian people that rose up 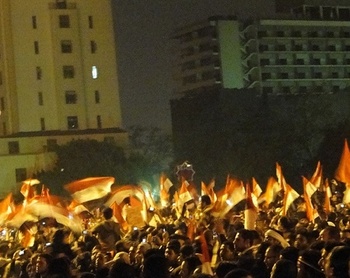 Louis who has been living in Cairo since 2006 and is married to blogger and activist Salma Said, will be taking part in our discussion on Thursday on Protest, technology and the end of fear.

Recalling his experiences during the revolution in Egypt, Louis says one of his most memorable moments during the protests was hearing that his wife “was safe with friends after she had escaped from the state security forces that had kidnapped her and held for hours”.

These past years I have seen the impunity with which the Egyptian government has brutalised and silenced its citizens.

When a general call to demonstrate against the regime came out I thought it only natural to go and offer my solidarity.

On the evening of 27 January, the government instructed internet providers and mobile phone companies  to cut off the service. One internet provider remained online as it was the provider for the stock exchange and I presume the government did not want to risk the consequences of cutting this. A handful of individuals subscribe to this provider, one of whom is a friend.

Landlines were still working so a few of us agreed to take turns manning a phone line and internet connection to relay information to friends as events unrolled. I used twitter and occupiedcairo.org to get as much information circulating as possible. Of course when mobiles came back online they were in constant use.

With the amount of information I processed over that period I really cannot remember one thing in particular that I read except perhaps the testimonies of those that had been arrested and tortured by the Army.

The announcement of a law banning protests and stating that it is punishable by one year’s prison or half a million Egyptian pounds is yet another reminder of the changes that need to happen.

Their determination to persevere until their demands were met was a real inspiration. We saw them on 28 January relentlessly push against the riot police until they reached Tahrir square. Then, as things got worse and the state sent thousands of thugs to murder those in the square, we saw civilians organise themselves into a shield to protect fellow protesters. Many lost their lives doing so.

The energy of the street and the adrenalin that kept people there is being systematically destroyed and undermined by the remaining elements of the old regime. The real challenge is to keep that original desire to change Egypt for the better keen in people’s minds and galvanise it into a true political change. The movement is far from over.

You can book tickets for Thursday’s discussion here.