Looking Back at 2010: On the Media at the Frontline Club 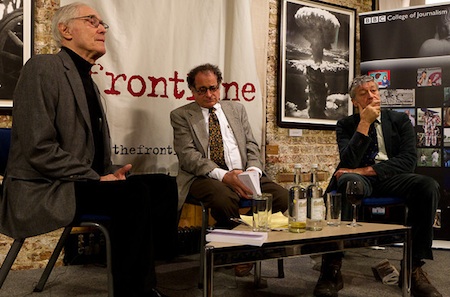 Crossing the Streams: Is PR becoming more like journalism?

The differences between PR and journalism and the extent to which the line is being crossed between traditional news reporting and PR-style propaganda was the focus of our On the Media event in July.

This discussion in August looked at Google’s influence on the UK and world’s news publishing and concluded that the wave of technological change behind the search giant that means the industry must “innovate or die”.

Read Jasper Jackson‘s blog post and watch the video of the discussion here.

Data skills and techniques for journalists

What would you do if someone handed you 90,000 unfiltered documents and asked you to make a story out of it? That was the question our September On the Media panelists set out to answer.

This sell-out event brought together expert journalists Simon Rogers, news editor (data) at The Guardian and editor of Guardian.co.uk’s Datablog; Julian Burgess, programmer and editorial developer at The Times; David McCandless, writer, designer and author of Information is Beautiful, and Michael Blastland, journalist and creator of BBC Radio 4’s More or Less programme to pass their knowledge about managing large amounts of data.

On Jasper Jackson‘s blog post Why you should use data to tell a more powerful story you can also watch video of the event.

TV journalism in the 21st century: the real golden age?

Are rumours of the death of old media platforms news print and TV justified? Or as TV holds on to the position of the world’s most dominant communication medium are we seeing the real golden age of TV news? Watch the video of our October event below.

For the last On the Media event of 2010 we were delighted to have veteran correspondent Mort Rosenblim with us to pass on his expertise about being a foreign correspondent. Read the blog post here and the video is here.


Topics:
News, On The Media