On this page we will be blogging updates live from the Troxy in East London, with updates from behind the scenes, pictures and whatever else we can find to post… 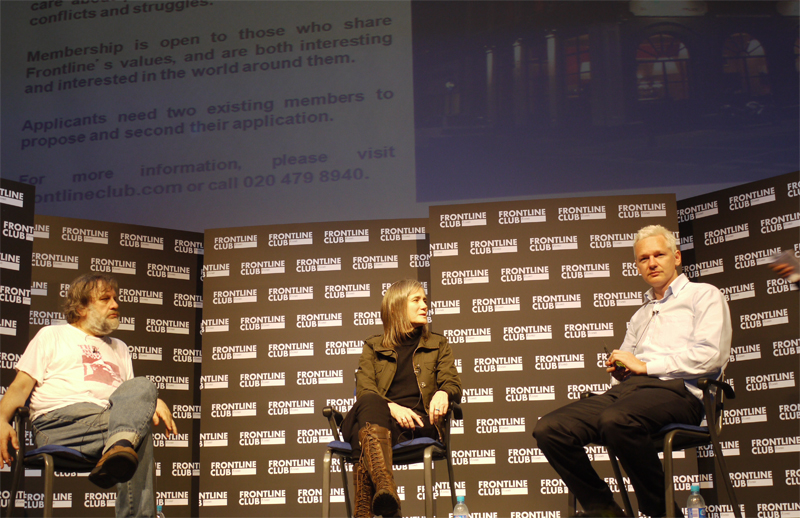 11:30am: Lots of people are tweeting already on the hashtag for the event, #FCwiki. @Owl_Food says: "have mixed views & hoping to develop some clarity on them.What better way than direct insight into #Assange #WikiLeaks #Zizek".

12:00pm: We will be live streaming the event from 4pm on frontlineclub.com. Link to follow.

13:24pm: Anyone looking for directions to the Troxy can find them here.

15:19pm: Assange, Žižek and Goodman take to the stage for a soundcheck. See photo here.

15:44pm: The crowd is slowly filtering in. @thisisnotariot tweets: "I feel like I’m at a gig. Should academics/whatever Assange is be elevated to superstar status? It’s not undeserved, granted…"

15:47pm: "Another Assange love-in or can we expect some robust questioning of Assange concerning Wikileaks, and its future direction?" asks @PGPBOARD.

16:04pm: Word is the event should be starting in approx ten mins from now.

16:23pm: Goodman discusses the WikiLeaks ‘Collateral Murder‘ video. "That is important we know what is done in our name," she says, describing Julian Assange as "the most widely published person on Earth".

16:28pm: "What advances us as a civilisation is the entirety of our knowledge," says Assange, explaining his motivation for starting WikiLeaks.

16:39pm: "We all know that the emperor is naked, but the moment somebody says the emperor is dead: everything changes," says Žižek. "You [Julian] are not only violating the rules, you are changing the very rules that we violate."

16:47pm: Žižek is making an analogy about the TV series 24. "We can often learn more from honest conservatives than liberals," he says. "They are more likely to tell you the truth than bullshit."

16:50pm: Goodman asks Assange about the calls for his assasination. "Obviously they are wrong and outrageous," he says. "It is worrying that a new Mccarthyism can come up so quickly."

16:55pm: Assange: "We shouldn’t always see censorship as a bad thing. It shows society is not yet completely sown up, but still has some political dimension to it."

16:59pm: Žižek on his alleged friendship with Lady Gaga: "Absolute denial. I didn’t even listen to one of her songs."

17:07pm: Assange says alleged WikiLeaks whistleblower Bradley Manning is of "high moral character" and adds that there are 19-23 people on the WikiLeaks grand jury in Virginia, US.

17:10pm: Assange says there is another grand jury looking in to anti-war activists in the US. Describes it as "another witchhunt".

17:26pm: Assange: "You’re here because you think that change is possible, and you’re probably right."

17:37pm: Žižek says "Truth must be contextualised… and you [WikiLeaks] are not just telling the truth."

17:41pm: Assange says he stayed in Egypt through 2007 at Miss Egypt’s house. "The technological basis to Cairo is pretty much the same as London," he says. "When we look at countries that are soft-dictatorships, the patterns of behaviour for most people are the same…"

17:45pm: Discussing Egyptian unrest, Assange says Tahir Square was important because people could see many others had similar views while media always suggest they are a minority.

17:56pm: Assange says Pentagon Papers leaker Daniel Ellsberg told him the New York Times had the Papers for a full month before publishing.

17:57pm: Assange explains WikiLeaks’ decision to sue Visa and Mastercard over blocking payments to the organisation. "[It has been an] extra judicial, economic blockade that has occured without any due process whatsoever."

18:02pm: Lots of great live tweeting going on over at Twitter.com on the #FCwiki hashtag. See here.

18:10pm: Žižek: "WikiLeaks pushes us to the point that we can no longer pretend not to know."

18:13pm: Žižek: "Even if you ignore WikiLeaks, it has changed the field. Nobody can pretend th
at WikiLeaks didn’t happen."

18:17pm: Goodman asks Assange his hopes for the future are, given that it is his 40th birthday tomorrow (3 July). "I want to move away from the Orwellian ‘he who controls the present controls the past’," he says.

18:18pm: The event concludes with massive applause. It can be watched again in full here.