To be clear right from the start, this is the first time that I’ve officially embedded with military forces. I say officially, because I’ve traipsed around in various places with a bunch of militia, guerrillas, terrorists, freedom fighters or paramilitary of one kind or another depending on your opinion and even found myself caught up in a gun fight and other similar situations. I have not, however, willingly put myself in a position where I’ve been so acutely aware that the aim of the game is not to scare, intimidate or put on a show of might but rather to kill or maim the enemy – and to the insurgents the US military is very much the enemy. With this in mind, and having heard from friends just how hairy it can get in some parts of the country, I wanted to proceed with caution. To this end my first embed experience was pitched at exactly the right level.

Command Outpost Garcia lies in a scarcely populated valley about 40 kms west of the Pakistan border. It’s manned by a company from the 101st airborne division, many of whom had previously been stationed in the Pech Valley in Northern Kunar Province, into which the infamous Korengal Valley runs. The korengal had been the seat of fierce fighting until the US pulled out in April 2010, preferring to attempt to pin the insurgents into the valley than continue suffering heavy casualties. The Pech Valley, though, is still an area of high “kinetic activity”, the preferred military term for any bang bang.  In contrast, COP Garcia is ostensibly secure.

Several of the soldiers I spoke to even expressed surprise that a COP had been set up there at all, since the US military strategy is to try and control areas of high population density, from which they can run civilian programmes and get on with the business of winning hearts and minds. Garcia’s original purpose was to provide support for the Afghan Border Police (ABP), who are spread thinly like sitting ducks along the border in isolated observation posts (OPs). This only came to the attention of the current deployment when they came across old documents relating to Garcia’s set up – which isn’t to say that they hadn’t been carrying out work with the ABP, Afghan National Police (ANP) and Afghan National Army (ANA), it’s just that they were apparently almost as miffed as I was about why the COP was built quite where it was.

Garcia’s area of operation is from Kama District in the far North West of Nangahar Province to Lal Por District on the border with Pakistan, some 60 km as the crow flies from one boundary to the other and about 25 km deep. The COP itself sits pretty much squarely in the middle of this area. My first excursion “behind the wire” was on an overnight mission to Kama. 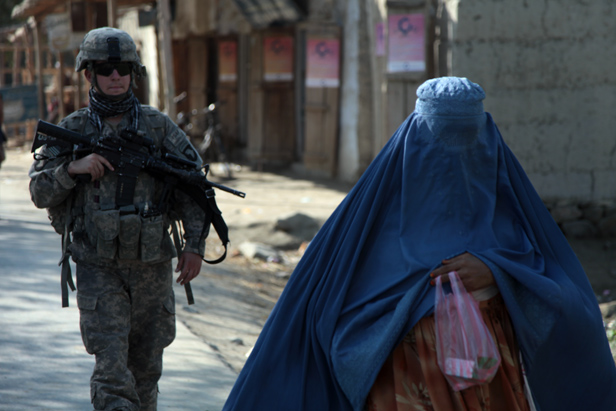 Kama is the kind of place where the kids really do stand in groves by the road side waving enthusiastically back at the US convoys, probably hoping that in due course they will get their very own pen or perhaps a lollipop. During the recent parliamentary elections it was the first district in Nangahar to return its counted ballots and it suffered no significant security threats. The last serious security incident in Kama was over a year ago when two IEDs were found but locals reported them to the police who in turn informed the US military. The infrastructure is reasonably good with tarmac roads handling a steady trickle of traffic and the occasional tractor in the fields. The area is densely populated with a string of villages some of which run into one another and people stroll carelessly down the roads beneath the shade of trees and stop to chat at small crafts or goods shops. Kama’s inhabitants even refer to it as “Little America” in joking conversations with US officers. Nonetheless, in spite of its relative prosperity and development in Afghan terms, when you strip away the vehicles, mobile phones and abundance of South-East-Asian-sweat-shop-t-shirts in the markets, as you drive through the mud wall villages with their extended family compounds that resemble fortresses you can’t help but feel like you’ve stepped several hundred years into the past. 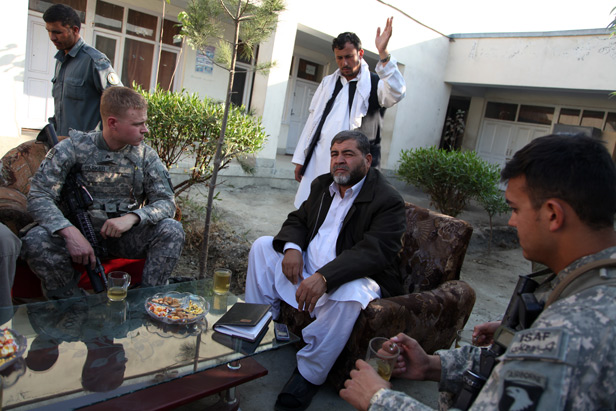 The mission in Kama is essentially to build good relations with the locals and to train the ANP and ANA. As part of the task the Lieutenant in charge of the section meets with the Police Commander and local leaders as needs be in a series of Key Leadership Engagements (KLEs). There is some substance to these but a large part of the conversations involve requests from the Afghan’s for money, equipment or assistance. The Lieutenant then patiently explains (time after time seemingly) that he has to work with the local government and his superiors to approve most of the requests and that there’s a process which will take time; the aim, he will re-iterate, is not to hand things out willy-nilly but to get Afghan involvement. I’ll cover what I saw of the police training in a separate entry as I can have a fair old rant on that based on previous experience.

There had also been intelligence that a local man was recruiting for the Taliban, leading us to stop at his supposed village to ask around with the locals but nothing came of it. As the Lieutenant explained to me “we just can’t go around kicking doors down in an area like this”.

It’s difficult to say how much, if any, of the “success story” in Kama is attributable to the reconstruction effort which is carried out by the US military. In fact there is good evidence that nationwide many of these programmes are abandoned, leaving half built schools, police stations and the like dotted around the county. One officer willingly conceded that local politics and rivalries – the enemy of my ene
my kind of thing – combined with the natural agricultural prosperity of the place are just as likely reasons for the calm. 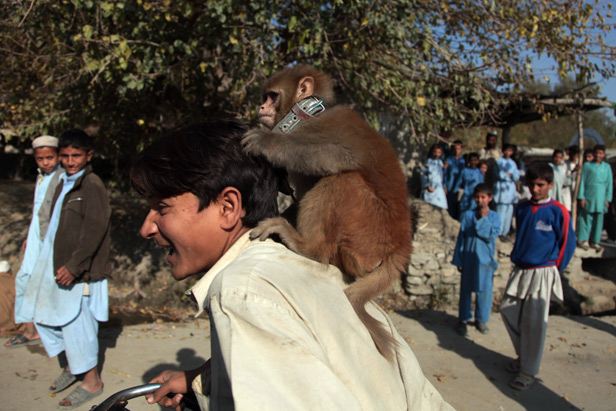 But the trip didn’t pass entirely without incident. During the night, the US sentry guards stationed on towers at the corners of the police station where we were staying found themselves following laser beams across their chests and then took several rounds from a BB gun. They brushed it off as kids playing pranks on them but were still visibly aggravated. Now, if I was a kid in that village I would seriously think twice about pointing a laser at a US infantry soldier with an M240 heavy machine gun, who may or may not have seen action before and may or may not be nervous as hell or mentally re-living some much worse episode or attack – let alone firing at him, with anything, even a BB gun.