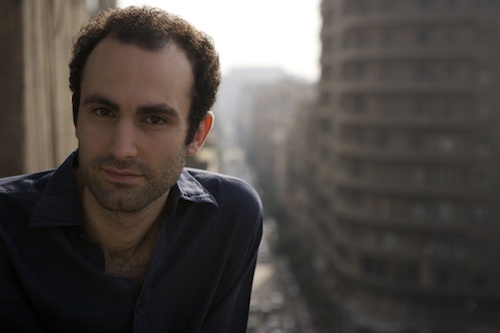 British-Egyptian actor and producer Khalid Abdalla flew from London to Egypt soon after it became clear that the protests of 25 January were gathering momentum and was there for the Friday ‘Day of anger’ on 28 January.

The Kite Runner star, whose other credits include Green Zone and In the Last Days of the City, was memorably interviewed from Tahrir Square by Channel 4 News’ Jon Snow while his father Hossam Abdalla was in the studio.

The co-founder of Zero Production, a film and documentary production house based in Cairo is currently setting up a non-profit media centre called Mossireen (Adamant) to support filmmakers and citizen journalists through the revolution.

Tunisia, it felt to me, had massively rejuvenated the narrative of popular protest in the Middle East, but having filmed almost every protest in Cairo over the last two years as part of an independent film called ‘In the Last Days of the City’, I thought Egypt’s watershed moment was a while away.

I discovered I was completely wrong at about 5pm, on a phone call to a Lebanese friend who asked me if I’d seen the images of Tahrir. It wasn’t until the following afternoon that I felt the full force of what was coming.

The images of Tahrir being dispersed and news of my friends continuing their protest through to 6am in Shubra was heartening. It was the shock of protests continuing the following day that made clear to me that this time was different. I’d seen plenty of demonstrations in Cairo and faced a minor arrest once. I’d never seen demonstrators take on the authorities no matter what, directly in the line of fire.

From that moment I became a protester and an activist. Prior to that I was neither a blogger, nor a political activist, I had no Facebook account, and I dreaded the idea of Twitter. I had on the other hand been a filmmaker and actor working in the alternative scene in Cairo. Which is to say that the fight for a new Egypt, in my opinion, is not and was not just a political one.

It is a movement spearheaded by everyone who was willing to make a personal sacrifice of whatever kind to create their own version of Egypt, against and despite Mubarak’s regime as it was, and sadly, still remains.

Being ‘followed’, or sought as a ‘friend’ was not something I wanted because my privacy was important to me, not to mention the fact that even with a smartphone addiction, I suffered from a regular email backlog that made me guilty enough.

When the revolution came, it became clear that social media was a way for me to join the dots. It took a while because within hours of my arrival in Cairo, all forms of communication had been cut.

Social media helped manage the balance of access to truth

The need to bear witness and share opinions in a political context in which the voice of the majority is opposed by the lies of state media at worst, and the economic interests of commercial media at best, means free social media is essential.

Without the myriad of bloggers and individuals using Twitter, Facebook, and YouTube, fighting alongside high quality reporting made by respectable journalists across all forms of media, the media war in this revolution would have been lost.

I joined Twitter and Facebook because it became clear to me that they were the best tools I had as an individual to access and benefit from as many people as possible. It was also an opportunity to do my bit in trying to convince others to protest or at least let them share in my thoughts.

The Facebook generation did not create what happened in Egypt

A second and third generation of political activists used social media as an important tool in a heavily weighted fight that was only counterbalanced when consensus on the street about an unjust regime became fearless. Tunisia broke the back. Social media helped the frenzy build in the run up to 25 January and fought as best it could against the state media afterwards.

But it was the spirit of generations of activists, demonstrators, workers and unions fighting as a shunned minority, under the most difficult circumstances, that meant a flame remained to light the fire when the time came. Mubarak’s idiocy, alongside that of his regime’s, was a big help too.

As we look forwards, the current situation puts into context both the power and limitations of new media. Despite the many gains won by the 25 January movement, the regime still stands, for the moment.

New media has temporarily lost the power of its audience

Consensus doesn’t exist anymore about anything – strategy, parties, the army, even torture. With the movement having lost the power of consensus, Facebook has lost its ability to draw primetime audiences, if you like. Meanwhile, the state remains in the hands of the regime and its interests (at home, and abroad), and most people are worrying about how to feed their families.

It is the army that hangs in the balance

From the very beginning they have had to choose between the millions that rose up, and the regime and its interests. Whenever they have chosen to be an obstacle to people’s demands for social justice, civil liberties and democracy, they have been met with an outcry that has forced them to give ground, and threatened to turn them into a target.

If they continue as they are, torturing, putting civilians on trial in military courts, banning protest and not bringing heads of the former regime to justice, I’m convinced that revolution stage two will come. An unstoppable force was unleashed on 25 January, in a just cause.

The present challenge is to organise ourselves

That is starting to happen. The losses our movement has incurred have been on account of our inability post-February 11th to act in unison, with clarity of purpose. Once we have achieved that, finishing this will be a matter of months, if not days.