In 1998 Jennifer Jenkins was shot four times by her brother, Mason, who was subsequently arrested and convicted for her murder. Their parents, Leslie and Brian Jenkins decided to continue to support their imprisoned son and were ostracised by their community.

Although many would find it surprising, this story of a Canadian family who stood by their son after he had shot their daughter, is the typical reaction of families in similar circumstances.

Dr Rachel Condry spoke to audience members after a screening of Life With Murder, an intimate portrait of the Jenkins family and the aftermath of their daughter’s death. Dr Condry, an Oxford University criminology lecturer and author of Families Shamed, which examines the consequences of serious crimes on the offender’s family, said:

“Can we understand a mother and a father who would stand by their son? I think that sometimes that is the case. If you imagine yourself as them and the person you love has been cast aside by everyone else and you’re the only one left to love them – there is this huge feeling of defence and that you’re the only one to support them. On a public level you want to stick up for them.” 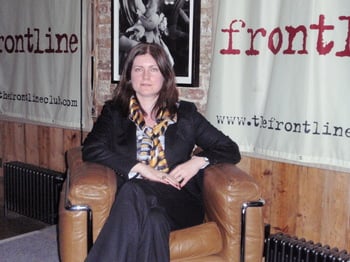 Dr Condry said that her research had shown that this experience was actually typical of many families – who, even in the face of obvious guilt, still want to separate the crime from the person they love.

The community’s shunning of the family was also common in Dr Condry’s work.

“Often, the reason why offenders’ families are ostracised is because it is difficult to get to grips with. People think that they are condoning the act – that, in some sense, they think that the crime is okay.”

According to the film’s maker, John Kastner, after showing the film in the family’s area some people began to talk to the Jenkins.  The couple also found watching the documentary to be “very cathartic”.

The discussion then turned to the motive and thinking behind such a shocking death:

“In real life there are so many grey areas. I think one of the powerful things of the film is that it leaves that question [of motive] unanswered.”

“We often think parents create their children, but this experience, of a person who commits a crime but comes from an ordinary family rang very true.”

Dr Condry said that the lengthy family visits seen in the film, which are also provided for in the US – which has one of the most punitive prison systems – would be an interesting rehabilitative means for prisoners.

Which leads to a key point Dr Condry has been a strong supporter of:

“On the point of families, their needs aren’t met by any particular government agency so they are often left on the sidelines. I would make a plea for having more policy that thinks about the needs of offenders’ families.”