A Handful of Dust: a Photography Exhibition by Nish Nalbandian

A humanistic photographic portrayal of everyday life of Syrian refugees living in Turkey formed the subject of a talk at the Frontline Club on Tuesday 17th April.

The award-winning photographer Nish Nalbandian came in for a conversation with documentary filmmaker and journalist Matthew Cassel for his latest book, A Handful of Dust – a 148 page reportage of Syrians forging new lives in southern Turkey.

Some of the slides from the book formed the background of the conversation and Cassel started by asking Nalbandian if he could explain his work in his own words. He said:

“There are almost 3 million Syrian refugees living in Turkey and every time I send pictures out for publicity they, (the media), want to run pictures of refugee camps but since many don’t live in camps I only have two pictures of them in the book. They in fact live all over…you’ll find people living in villages, some squatting in camps or renting apartments in smaller towns and cities in Istanbul and Ankara. So, it’s hard to give a blanket statement about what people are doing and where they are staying.”

He showed pictures of Rehanli in Hatay province and explained how he spent an afternoon with the family where the local farmer let a family of refugees stay but the building was not suitable for winter. The only help they had received from the Turkish government were bags of coal that the photograph showed the children playing with. Nalbandian said: “I was there right before Christmas and it struck me how happy the kids were because they had these bags of coal to play on.” 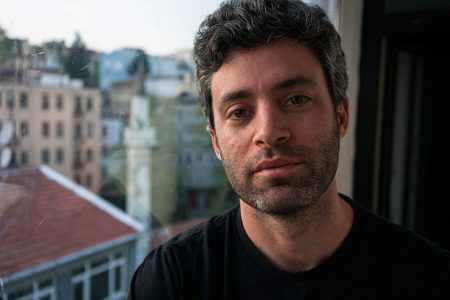 Matthew Cassel, who hosted the event is an award-winning filmmaker and multimedia journalist based in the Mediterranean region.

As a majority of the pictures were of the refugees living outside camps Cassel asked Nalbandian how they were supported, he said, “by everyone and no one”. He pointed to the efforts of Turkish people, from Syrians themselves and international NGO’s. He also added:

“But some families were not on the radar and they don’t register, (for fear of being put into camps). The Turkish Red Cross/Red Crescent does have programmes, but it doesn’t reach everyone.”

Tomorrow: @frontlineclub are hosting award-winning photojournalist Nish Nalbandian and showcasing his portraits from "A Handful of Dust". The exhibition focuses on Syrian refugees living in Turkey. Get your tickets here https://t.co/VSuGgWVvc4 pic.twitter.com/kVjxmuHdPY

Talking about the title of the book Nalbandian said it is selected from T. S. Eliot’s poem, The Waste Land, as it captured the way in which people were scattered from their homes. He also commented that the book starts with images of camps, showing the refugees eking out an existence but explained: “The whole book is not like this, which I hope you’ll see.”

He added that he has stayed in touch with almost all the families he photographed but most them move on and the neighbours of one particular family he depicted said they chose to go to a camp in order to access essential services and care.

Talking about his thoughtful approach to representing everyday realities of migrants and refugees Nalbandian said: “I think it’s important to get to know what they are feeling and get a sense of what’s going on with them and that emotional connection is important, it’s what gets you the picture.”

In terms of photographic equipment Nalbandian took a a medium-format film camera instead of just shooting Polaroids. He suggested: “It gave a formality to the picture and to the process and people responded to that, they felt you’re taking the time to do something import for them.”

“It struck me what was happening now was something which had happened previously with the Armenians”- Nalbandian talking of his own Armenian heritage and his interest in documenting migration stories pic.twitter.com/In6LyCNSLH

Toward the end of the talk Nalbandian paused in front of a panoramic view of Gaziantep, a city where some of the subjects of his book lived, and said it had a particular resonance with him as it showed an old Armenian Catholic church now being used as a mosque and this reminded him of his own Armenian heritage. He explained:

“It struck me how in 2015 I was documenting a migration a hundred years later on exactly the same routes, just in reverse. There was a huge flow of people in 1915 from Anatolia (present-day Turkey) to Syria. The reason why I do portraitures like this is because I have a photograph of my grandfather from 1915 in Iskenderun, southern Turkey wearing his French Armenian Legion uniform and I wanted to make portraits that spoke to me in that way. I would like to go back and recreate that portrait and have people stand in the same pose using the 8×10 old film camera to show people in the same place a hundred years on. ”

One of the points raised in the Q&A session was if the people he photographed wanted their stories to be told, To this he said:

During the evening numerous other comments and questions followed on the intricacies of refugees’ lives and how Nalbandian had tried to show among others people who were enterprising and trying to move away from the tragedies bought on by the war.