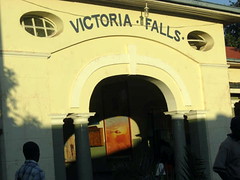 From Tuesday April 1: Victoria Falls, Harare
The rumoured developments donâ€™t happen. Thereâ€™s no premature announcement of a Mugabe victoryâ€¦ just a further drip, drip, drip of parliamentary results and I suspect they mean to drag this out until everybody is bored with it, in the hope that people lose any will to protest.
This is 3am â€˜wisdomâ€™ speaking of course. The heightened tensions of yesterday left me, and no doubt several million Zimbabweans, unable to sleep. By 6am I had digested all the overnight analysis (frenzied speculation about military coups, SADC intervention, feelers put out between the opposition, Mugabe and the military, all of which turn out to be wild guesses).
I decide against heading back to Bulawayo. On balance I think it is unlikely to be in the grip of popular protest. Instead, I spend the day in and around one of Zimbabweâ€™s most-favoured tourist destinations, the Victoria Falls. 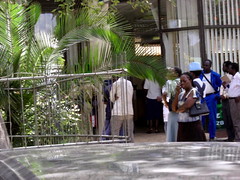 Business is not at its best in Vic Falls. Most hotels are operating at somewhat below 30% of capacity. Even those that have carved out a regular share of the lucrative tour group market feel rather empty. There appear to be more staff than guests. The political situation is frightening off visitors.
For a town whose livelihood is almost 100% dependent on the tourist trade, this means everyone is hurting. I discover that here the unofficial exchange rate â€“ the street rate – is 30 million to the US dollar, compared to more than 40 million in the capital.
Along Livingstone Way, the main street that runs through town from the border to the Bulawayo Road, there are signs in front of the three main banks warning foreign visitors that it is against the law to exchange foreign money anywhere else. Each bank has its forlorn queue of Zimbabweans snaking from the door, forced to waste hours trying to cash paychecks or to draw enough money for their everyday needs.
â€œWe are not allowed to keep foreign currency â€“ but our money is worthless. Every week, the Zim dollar buys less than the week beforeâ€, local woodcarver Freedom tells me. â€œWe have big problems here in Zimbabwe, madam and that is why everyone here was hoping for change.â€
A month ago, a shirt at the Batoka clothing store 100 metres up the road was 200 million Zimbabwean dollars (ZD). With hyperinflation now around 200% per month (estimated at more than 120,000 year on year), a lively barter trade has sprung up with locals eager to trade Nyanga ironwood carvings, serpentine Shona sculptures or Batonga baskets for clothing and footwear. Today that same Batoka shirt was 850 million ZD. Not that anyone was buyingâ€¦ they were flocking to any cafÃ© with a TV to see whether the Zimbabwe Electoral Commission (ZEC) had any further light to shed on the outcome of Saturdayâ€™s elections. 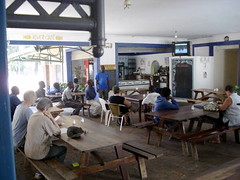 FEELING CHEATED
It amounts to death by a thousand cuts. At random, at tedious length, an inarticulate spokesman or woman woodenly pronounces a jangle of names and numbers.
The audience at the River CafÃ© scribbles furiouslyâ€¦ after a while the rhythm is totally predictable: a litany of constituency name, the candidatesâ€™ names and number of votes received by each, then the pronouncement: so-and-so â€œof the MDC-Tsvangirai faction is duly electedâ€, followed in strict sequence by blah, blah, blahâ€¦ and so-and-so â€œof Zanu-PF is duly electedâ€. Ping Pong. The appearance is given that the two main parties are neck and neck.
The Zimbabwe Electoral Commission (ZEC) broadcast takes an hour or more â€“ a male spokesman with the benefit of some tuppence haâ€™penny graphs repeats the account. In summary, 25 more seats (out of 210) have been allocated: 13 to Zanu-PF and 12 to MDC-Tsv.
As I sit watching, Tendai comes to find me: â€œI donâ€™t understand â€“ on Sunday I heard from Bindura that the sitting MP Eliot Manyika had lost, got into a dispute, shot someone (allegedly his driver) and was in police custody. Today it turns out heâ€™s been elected after all.â€
A bystander says: â€œDonâ€™t worry, the MDC will have the real result from every ward, even photographs. If the ZEC and Zanu-PF change the figures, they will be found out.â€
Whisper was a candidate for his town council but lost to MDC-Tsv. He says the opposition will not take another stolen election lying down: â€œI want you to write this – I think this time if they steal the election, the MDC will fight.â€ 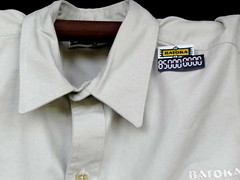 COLLATERAL DAMAGE
We are speaking on the edge of the curio market, where just a few tourists desultorily wander up and down the rows of carvings and sculptures on display, while the vendors slump despondently, occasionally stirring themselves at the prospect of a client.
I ask about the price of a carved stone bird, pointing to its head, inadvertently touching it with the tip of my index finger. Disaster ensues: the carving topples over and breaks into two at the neck. I freeze in anguish stammering my apologies but the salesman, who had previously assured me he sat up all night carving the bird out of serpentine, brushes off my attempt to compensate him.
An acquaintance ushers me away before I embarrass myself further, reassuring me â€œItâ€™s okay, it was probably already broken and he thought he could get away with fixing it with superglue.â€
I am reminded of some advice given last month by one of the regional experts at a South-African based safari company: â€œZimbabwe is perfectly safe for tourists. In spite of poverty there is very little crime and you will be enchanted by the friendly, open welcome you will get from everyoneâ€¦ even if they are trying to rip you off, they are nice about it.â€ 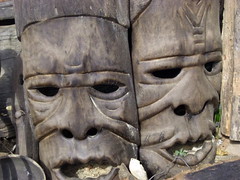 FAITH RESTORED
Some weeks ago I mailed a small parcel to a friend in Victoria Falls. In truth, neither of us was certain it would arrive safely. I had further complicated the parcelâ€™s chances of being misplaced by misspelling the recipientâ€™s name.
We went together to enquire at the main post office and were directed to the branch office in Chinotimba, the high-density township suburb adjoining Vic Falls. We walked the kilometre or two between the two offices in the noon sunshine along dirt paths, the sandy earth turning feet and ankles red.
The Chinotimba branch was temporarily unattended. The staff have rearranged the opening times to come in half-an-hour earlier in the morning so as to take an extra 30 minutes for lunch, which allows them time enough to go home to eat.
When the door finally opens, we explain our mission. Miraculously the clerkâ€™s face lights up, â€œoh yes the package is hereâ€, she says, producing it straight away. I explain the mistaken name, my friend produces her ID card as proof of her real name, and the package is ours â€“ not even any duty to pay.
We are jubilant. This has completely restored our faith in poor, battered Zimpost, which like most Zimbabwean organizations, has not weathered too well in recent times.
TSUNAMI FEARS
From there it was barely another kilometre to the neighbouring township, Mkhosana, where I wanted to catch up with some MDC activists.
Lindi was no longer hopeful: â€œThe old man is going to steal the election, I just know it. Heâ€™s done this too many times before. And then when his so-called victory is announced he will plot his revenge on the areas that didnâ€™t vote for him.â€
She explains. Operation Murambatsvina (Clean out the Filth) which left an estimated 700,000 poor Zimbabweans homeless after their homes were bulldozed, was seen as Mugabeâ€™s revenge on the urban poor who voted against him and for the opposition MDC in 2002.
â€œIt was a tsunami,â€ she says. â€œThatâ€™s what we called it. It came out of nowhere and swept everything away.â€
Now she and her husband worry that the scale of this electoral rebuff will provoke yet another backlash from a president who inspires only fear and loathing. â€œHe has a long memory and he is very, very patient. If he stays in power, be sure he will make us pay, sooner or later.â€
Like everyone I speak to, they are quite convinced that there can be no other reason for the delay in announcing the election results, other than someone is â€œcooking the booksâ€.
I set off on the dusty walk back along the main Bulawayo road back into Vic Falls. My cellphone has barely pinged all day. The torrent of text messages of previous days has dried up. Communications are on hold until some glimmer of a result can be discerned from the confusion being spread by the ZEC.