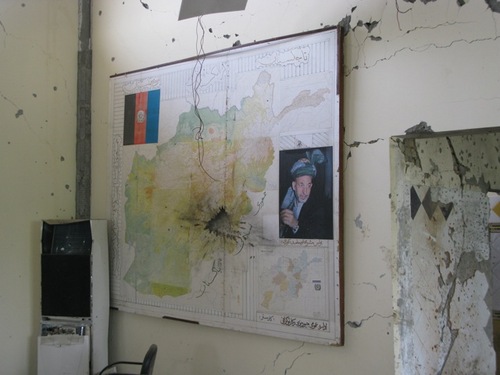 For outsiders, Kandahar was never really somewhere you could fall in love with.  You know the kind of thing I mean: places people went to honeymoon, places with a certain ineluctable quality to them… Back in the seventies, when Kandahar was a popular stopover city on the hippy trail to Kabul and India, one such traveller even described it as ‘a gentle oasis’.

These days, Kandahar is the city of nobody’s dreams.

Pace Farnaza Fassihi, living in Kandahar is like being under virtual house arrest.  Most days I stay at home, travel somewhere only when I have something specific to do there – a meeting, something I want to see – and am forced to enjoy Kandahar at a distance.  True, I’m lucky enough to have a great balcony view over the town and all the way down to where the desert starts.

This also isn’t to say I don’t get out at all.  Arghandab is a regular stop for a picnic or a swim on the weekends, and within the city most travel is more or less going to be ok.  Nevertheless, caution pays dividends (as stencilled letters on one taxi here informed me); the two big risks for foreigners in the city are kidnapping and being in the wrong place at the wrong time when a bomb goes off.

This happens increasingly often.  Those who follow my twitter postings – an easier way to get news out when there isn’t enough information to justify a full blog post – will have noticed the upward trend this past year in pictures of post-explosion clouds of debris, or holes in the ground where IEDs were laid.

Occasionally a troupe of journalists make their way into the city, but only for three or four days, and almost always working on a specific story; no more time to leisurely get to know Kandahar, no time for picnics…

When did it turn sour?  2006 was probably the turning point for the province, with all out battles in the districts and all sorts of mess within the city.  To the average observer abroad,  Kandahar must seem rather stable.  Reports from the city describing the atmosphere and downward spiral are scarce to be found, and generally it takes the death of a foreign soldier or at least a dozen Afghan casualties to qualify for a Kandahar dateline.

I compile a list of violent incidents in the greater Kandahar area from open source and local sources each day.  A year ago, that list would hardly ever exceed one page.  Nowadays, it’s not unusual to reach three pages: a list of bombs, murders, executions, attacks and threats.  It’s enough work keeping up with all of that, but then there’s all the personal stories of how people get through their days.

It’s nearly impossible to get a decent sense of what’s going on in the districts.  The international media stick exclusively (with some reason, albeit qualified) to embeds to get a sense of southern Afghanistan.  I heard rumours the other day that a well-known American journalist is thinking of repeating the success of a book that he wrote reporting in Baghdad: this time he’s doing one on Kandahar, though this time exclusively from time spent doing embeds…

Local journalism – despite the best efforts of a dedicated group – is reactive for the most part, responding to some bomb blast or assassination rather than actively generating content or a sense of what it means live in Kandahar.

In fact, the only way to get a sense of life in the districts is to step into the shoes – albeit briefly – of those that live there.  You want to find out how safe the roads are between the city and the districts: step into a taxi and run the gauntlet for yourself.  I’ll be writing more about my attempts to get a sense of what’s going on in the western district of Maiwand in the coming weeks, but this is the kind of thing that you have to submit yourself to if you really want to get an accurate handle on what is going on and how things are for people living there.

I’ve always advocated that journalists ought to be writing more about Kandahar, and writing more from outside military bases or press conferences.  Despite the danger, southern Afghanistan is an incredibly important locus of what’s going on in the country right now — with the elections, with the Taliban, with Pakistan, with the US military, with NATO forces — and it seems morally indefensible to my mind not to be paying close attention to all these causes and effects jumbling up against each other.

The population in the city and the outer villages brace themselves against all these manifestations of violence.  A common saying these days upon parting company is, ‘I’ll see you soon, if we’re still alive.’  Educated Kandaharis are scared; many leave for Kabul, or abroad if they are lucky (or rich) enough to have visas for foreign travel.

Election gossip is all the rage these days, even in some of the worse-off districts.  The posters of provincial council candidates are all over town, and ‘the bazaar is warm’ (as the local saying goes) for the (illegal) purchase and exchange of voter cards.  As one prominent local figure put it to me yesterday: "The election has to happen, one way or another.  The foreigners have spent so much money in our country already.  They’re paying another $130 million for this round of elections.  What would they say if we couldn’t at least give them some elections?"

So the elections will take place.  It’s a good opportunity to shuffle the cards and jiggle the networks of power all over the country, but nobody — at least not anybody living here — has any illusion that these elections will be free or fair.

[Apologies for the tone of today’s post, but it’s difficult to be optimistic when the situation is so bad.]