So I fell behind on these blog entries. Time permitting, I’ll hopefully fill in some of the gaps but for the moment I want to forge on.

I’m in Kabul, where I’m moving around unilaterally. Having previously spent so long in the city under lock and key and after a solid month embedding, it’s refreshing to be able to explore the place a little. 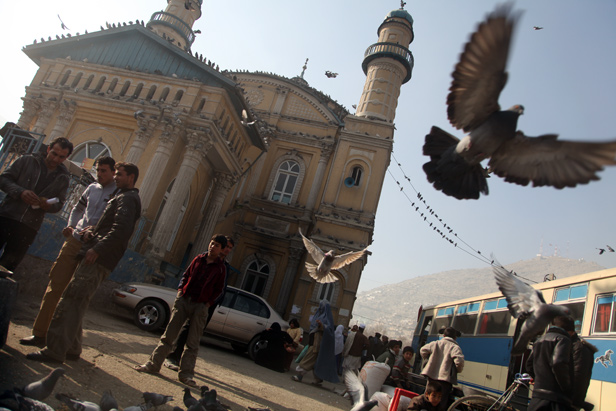 I already knew Kabul well enough to know where the secure areas are and where it is considered safe to walk around independently. That said, when you have only previously travelled the city in an armoured vehicle and only set foot on the streets briefly and at that, always in a flak jacket and helmet, the psychological effect leaves you subconsciously convinced that there is a very real and ever present danger. Now I don’t want to tempt fate or deny that there is danger out there – yesterday’s attacks proved there clearly is – however, if you follow some simple rules then it is worth taking the calculated risk to explore the city. Among those rules are: don’t frequent the same unprotected places on a daily basis, don’t follow the same route every day, don’t stray outside your comfort zone (know where you are and where you are going at the very least), do remain aware of your surroundings and do keep a low profile.

The last of those is perhaps the most difficult to achieve. Even with my ever thickening beard, if I was to don local garbs and try to amble through town I think I would still stick out a mile away, a problem which although not unique to Brits seems to be something we’ve built a reputation for. I am reminded of Indiana Jones and the Last Crusade, in which Jones insists his adversary will never find Marcus Brody: “Brody’s got friends in every town and village from here to the Sudan, he speaks a dozen languages, knows every local custom, he’ll blend in, disappear, you’ll never see him again.” The camera cuts to Brody who is surrounded by the chaos and undulation of an Egyptian market place with a myriad of voices shrieking in high pitched Arabic, while he, dressed all in white à la Man from Monte, is asking ”Uhhh, does anyone here speak English?” Hopefully I’m not as bad as Brody. 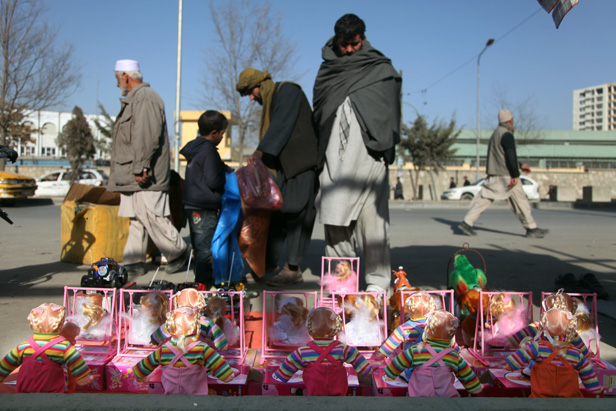 At the end of the day though, central Kabul carries relatively little risk. There is a strong security presence with police on most street junctions either attempting to man-handle Kabul’s messy but slow flowing coagulation of vehicles or lounging behind sand bags at ministries, banks or even private residences.

Contrary to what I said above and to what I would have expected, the first thing to strike me was that nobody pays me the slightest bit of attention. Apart from the occasional child begging for a dollar I am left to my own devices unless I stop to ask a question with my Brody like introduction “uhhhh, does anyone here speak English?”

The only exceptions to this are over-enthusiastic policemen who want to see my papers, even though their chances of reading, let alone understanding, anything in my passport are probably about the same as those of rolling a double six. They nonetheless seem happy to have the opportunity to show they are doing their job and in return I smile gratefully as if I feel much safer thanks to their intervention. Over enthusiasm, however, is hardly the curse of your average Afghani police man.

For anyone who has travelled in the Middle East (and I’m not confusing South/Central Asia with the Middle East but just for comparison’s sake), the level of attention is about what you might expect in Syria, which is to say a thousand times less than Egypt and several times less than the Dahia, Hizbullah’s strong hold in Southern Beirut, where loitering too long with a camera will have you well on your way to a day’s worth of questioning unless Miss Wafa, Hizbullah’s Press Officer, can vouch that you have gone through the proper channels.

I suspect the reason why there is so little fuss is because, as in Ethiopia, the people are too proud to pay any attention to you, or at least this is what I will believe until convinced otherwise. Ok, I know, I know, these are broad strokes but there is I’m sure some truth in it, something in the fact of being able to say “try and try as you did, you were never able to keep us under your control for more than a few measly years and no, we never gave up”.

All of this is of course based on wandering around the centre of town and I’m sure that in other suburbs there could be quite a different story. Above all else, Kabul is a large city, and like so many other cities that have undergone vast expansion and upheavals it has its cosmopolitan side that will embrace you and it’s under belly which is likely to be suspicious of you.

Ah, I forgot there is one other group which display a little more interest and I willing admit this is probably my fault not theirs, namely those Afghans who have a light complexion, leading to a momentary glance of mutual recognition and curiosity.

Among the other unexpected things I’ve noticed is that pizza is all the rage! In some parts of the new town – Share Nau – with its sprinkling of shiny new buildings, you would think it was the national dish. This must be a recent development though, since an adventurous Kiwi friend who simply turned up in Kabul some five years ago and got herself a job as a waitress for a few months, recently sent me a message saying I should try one of the sausages that they sell in local bread and call “hamburgers.” Nowadays hamburgers are every bit as ubiquitous as the pizzas and not at all bad at that. Oh, the endless march of progress.

But let me remove my tongue from my cheek before my foot follows it. There may be Pizza shops and DVD stalls with Britney Spears flashing at you from a dozen different covers but the streets are still heavily populated by bearded men who look as if they might just have wandered in from a meadow with a staff in their hand and whose very appearance conveys a kind of wisdom that everyone everywhere else might well be in danger of losing. I have on several occasions had the feeling that I am being assessed and that the verdict would be delivered in Yoda like tones “When 900 years you reach, look as good, you will not”.

At a guess, I’d say a little more than half the women you see in the central parts of town wear the Burka. It also seems a good portion of those who do will happily lift it up so as to talk face to face when they enter a shop or bump into a friend in the street – doubtless the latter is harder if they are both wearing burkas. 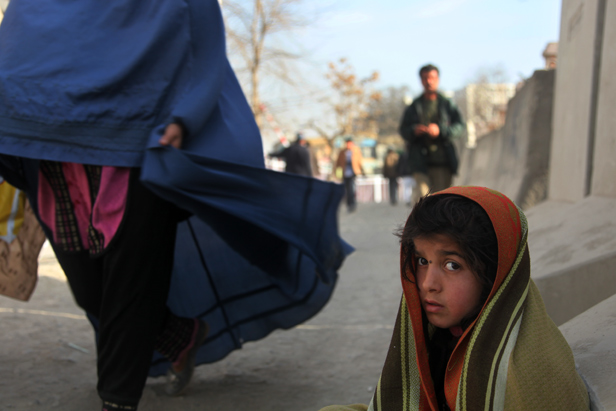 Considering the endless restrictions (and worse) that took place during the Taliban years, walking around Kabul nowadays could lead you to believe that a lot has changed for the better. Perhaps the fact that Afghan men don’t have to wear a beard and that women don’t have to wear the burka is merely superficial but they clearly don’t want to be forced to again. On the other hand there is still much to complain about and although the rich may be very comfortable in their “poppy palaces” – as the exuberant walled residences that have gone up in the affluent areas are known as – most of the population must have serious concerns about what is coming in the future and whether their city can adjust to its new size and provide the opportunities it’s people would like. 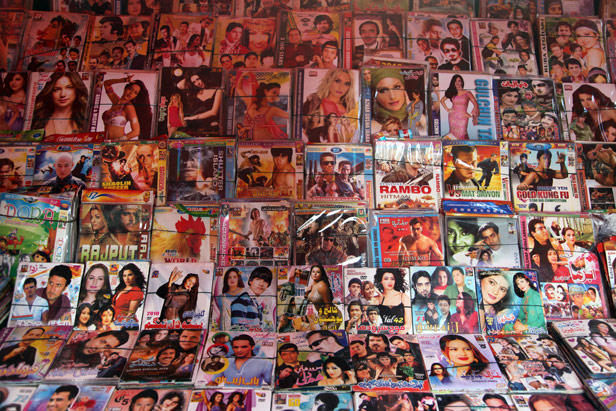 In one open market I walked past heaps of dubious pink DVDs with scantily clad women on their covers piled on the floor. Things like this may leave you resigned to the fact that you have to take the good with the bad and that you should remember Soho is all of two minutes from Piccadilly Circus but they are nonetheless good indicators. They mean that the guys who openly sell such things have very little fear of being taken aside for some kind of medieval punishment.

Along the most open roads an ISAF convoy occasionally parts the traffic to remind you that in the background there is a very powerful military machine that is more than capable of securing Kabul and its surroundings but leaves you questioning whether the atmosphere will change after they are gone. Will the afghan forces be able to keep the Taliban at bay? It only takes a couple of strict verdicts from a Taliban Sharia court to dole out the kind of punishments that will have compulsory beards and burkas back on pretty quickly.

The attack that hit Kabul yesterday (there was a simultaneous attack in Kunduz) took place on Jalalabad Rd, which is where my old compound was based. It is also the location of a string of military bases starting in the fortified “green zone” around the US embassy and stretching eastwards to the outskirts of town. Between the two attacks 13 people were killed and there will be more attacks and some of them may well be focused on the areas in the centre of town that I have just described, as has been the case in the past.