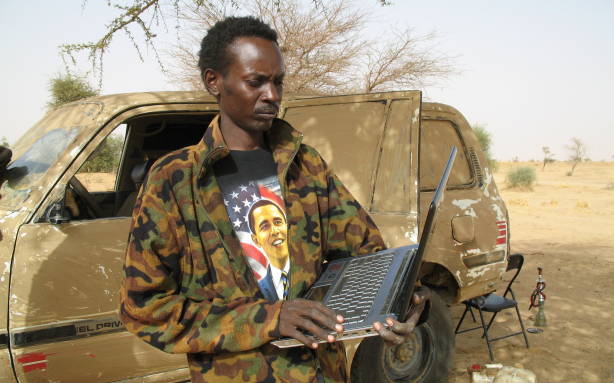 The war in Darfur is being fought with pickups loaded with Dushka anti-aircraft guns, rocket propelled grenades and a Toyota LandCruiser kitted out as a mobile media centre. Deep in North Darfur, along the border with Chad, Khalid Mohamed Ahmed produces a newsletter for the troops, updates sudanjem.com and even sends videos to YouTube.

"Our problem is that the car is small. We need a big one with room for a proper photocopier," he told me as we stood in the shade of a thorn tree, where his LandCruiser had been parked to keep it cool. "And we could use some better software. But the heat and dust are OK. This is our life."

The heat was intense. It must have been well over 40C each of the days I travelled with the Jem column.  A hairdryer wind whipped dust into the air. But armed with two laptops, a DSL link through his Thuraya, a printer and camera all charged with a small generator, Khalid and his team weren’t doing a bad job. Julie Flint on Making Sense of Darfur has highlighted Jem’s effective use of the media…

A recent article in The Times of London is a piece of propaganda for JEM, making no mention of January 1 but waxing lyrical about a leadership that “boasts an impressive array of doctors and lawyers and a sophisticated agenda that extends to redistributing power among Sudan’s oppressed and marginalised peoples.” A blogger is suitably impressed by the correspondent’s take: “I am extremely grateful JEM have taken up the task of defending the poor victims of Darfur and other oppressed people in . If anyone can bring Al-Bashir to be judged by the ICC, they can and I wish them all the very best of luck in achieving this feat!” For heaven’s sake!

The temptation is always to go with the rebels. In Darfur, they are taking on an oppressive regime that is guilty of terrible abuses against its own people. And Jem certainly has a slick media operation, allowing people like me and other correspondents to travel with them. But Africa is littered with rebels who have taken power only to forget their promises. Rebel commanders tend to make bad presidents, ruling by paranoia and central control – just as they did in the bush.

Jem’s leadership is slick and understands how it needs to engage with journalists as part of their campaign. But we shouldn’t let up in our scrutiny of their record on child soldiers or ethnic splits or let ourselves get caught up with romantic notions of freedom fighters with heads filled with poetry. No war is that simple.