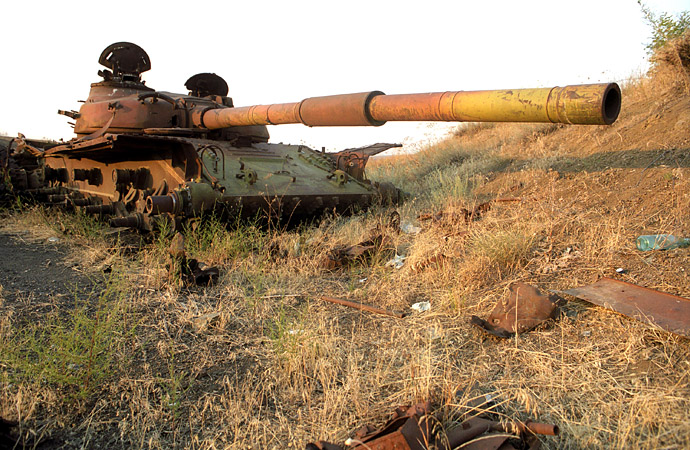 While it didn’t come as much of a surprise, the latest report from the International Crisis Group (ICG) makes depressing reading. Locked in a bitter stalemate since the war over the disputed territory of Nagorno Karabakh during which around 25,000 were killed and a million forced to flee their homes, a final peace deal remains as elusive as ever. More alarmingly, perhaps, last year was one of the worst in recent history with skirmishes on the front line claiming dozens of lives. Moreover, if talk since the 1994 ceasefire agreement, which effectively put the conflict on hold, had been of conflict resolution, 2011 looks to be more defined by increasing talk of the need for conflict prevention.

An arms race, escalating front-line clashes, vitriolic war rhetoric and a virtual breakdown in peace talks are increasing the chance Armenia and Azerbaijan will go back to war over Nagorno-Karabakh. Preventing this is urgent. Increased military capabilities on both sides would make a new armed conflict in the South Caucasus far more deadly than the 1992-1994 one that ended with a shaky truce. Neither side would be likely to win easily or quickly. Regional alliances could pull in Russia, Turkey and Iran. Vital oil and gas pipelines near the front lines would be threatened, as would the cooperation between Russia and Turkey that is central to regional stability. Another refugee crisis would be likely. To start reversing this dangerous downward trend, the opposing sides should sign a document on basic principles for resolving the conflict peacefully and undertake confidence-building steps to reduce tensions and avert a resumption of fighting.

There has been significant deterioration over the past year. Neither government is planning an all-out offensive in the near term, but skirmishes that already kill 30 people a year could easily spiral out of control. It is unclear if the leaders in Yerevan and Baku thoroughly calculate the potential consequences of a new round of tit-for-tat attacks. Ambiguity and lack of transparency about operations along the line of contact, arms deals and other military expenditures and even the state of the peace talks all contribute to a precarious situation. Monitoring mechanisms should be strengthened and confidence-building steps implemented to decrease the chance of an accidental war.

At the same time, more has to be done to change a status quo that is deeply damaging to Azerbaijan; 586,000 Azeris are internally displaced (IDPs) from Nagorno-Karabakh and adjacent areas, and some 16 per cent of the country’s territory is occupied. Otherwise, Azerbaijan public opinion and leadership will feel justified to use the military assets Baku has been accumulating at an increased rate: the already substantial defence budget is slated to rise by some 45 per cent between 2010 and 2011, to $3.1 billion out of a total $15.9 billion state budget.

The report, available for download in PDF format here, includes some sensible recommendations such as the need to endorse the basic principles which would form the basis for a later peace agreement, the implementation of confidence building measures such as the withdrawal of snipers from the front line, compliance with arms limitations treaties and agreements, but particularly a change in policy which only aggravates the situation. Unfortunately, though, the task will not be simple, especially in an environment where most Armenians and Azerbaijanis are unwilling or unable to communicate with each other.

A recent household survey by the Caucasus Resource Research Centers (CRRC), for example, revealed that 70 percent of Armenians were against friendship with Azerbaijanis, while 97 percent of Azerbaijanis were against friendship with Armenians. Meanwhile, town hall meetings in Armenia, Azerbaijan and Nagorno Karabakh showed that over 50 percent of Armenians prefer the current situation of ‘no war, no peace’ rather than compromise and release territories surrounding Karabakh currently under Armenian control for a referendum to determine the territory’s status. Only 0.3 percent of Azerbaijanis support such an option. 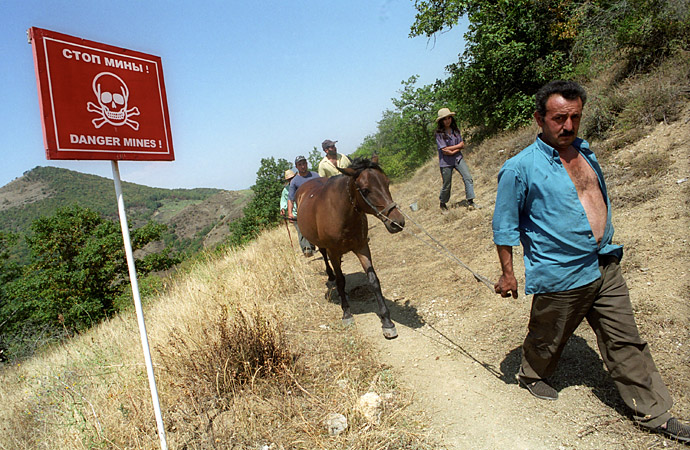 The media in both countries plays a less than constructive role by perpetuating negative stereotypes of the enemy too, and the outlook in general looks bleak. Indeed, some analysts and regional experts preempted the ICG report by wondering if a new war in the near future was now inevitable. Nevertheless, there are some alternative voices starting to emerge although they remain a tiny minority in both countries. It might even be appropriate to call them insignificant, but as they were never heard before, and their existence in an environment hardly conducive to any talk of peace somewhat unprecedented, that’s probably unfair. 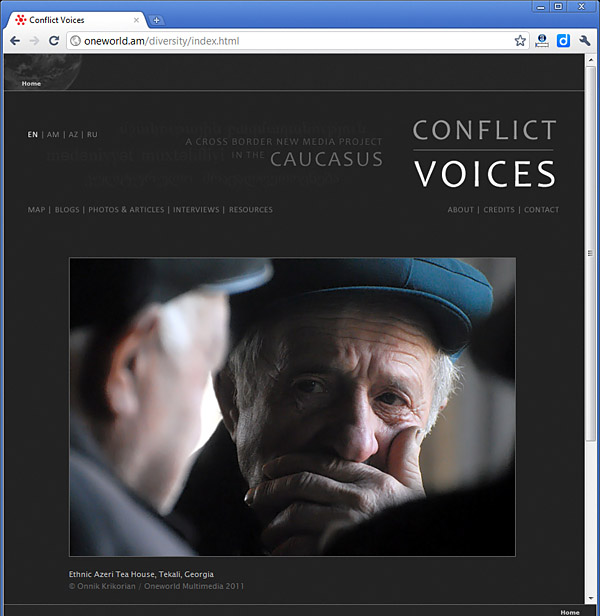 In fact, they’re very significant indeed simply because they exist at all, although there is an urgent need to increase their numbers and make alternative views on the conflict more widely available. Although this should be through the mass media, that is next to impossible for now, although social media offers an albeit limited alternative. This is what my personal project, Conflict Voices, and special coverage on Global Voices is trying to achieve. Recently, for example, Marianna Karapetyan, an Armenian now living in Russia, wrote about her close friendship with an Azerbaijani. Such views and realities are rarely if ever heard in the local Armenian and Azerbaijani media.

[…] we made an agreement promising never to discuss the situation between our countries because we knew that, as we’d been told different things, the discussion would never be constructive and only just harm our friendship. This was perfectly convenient for me because, unlike Leyla, I knew next to nothing and I wouldn’t really be able to argue. But realizing this, I was always amazed that she came to meet me first, despite all that true or false information she had been told about Armenia back home. Over time, I started researching the conflict and asking around to fill in the gaps of my knowledge and to understand what had happened. But, as I was learning and discovering more, I never felt my feelings towards Leyla changing. Instead, we became even closer as friends.

Not only that, but I also learned that during the incidents in Baku, her family helped many Armenians in different ways. They traded their apartment in Moscow for one owned
by Armenians in Baku, and even though the Moscow one was way more valuable, so that they could move. Her grandma’s passport was also used to transfer around 50 Armenian women across the border and her neighbor continues to help people sneak through customs in Georgia to see their abandoned homes. In fact, there are many more such stories which I would never have allowed myself to believe before.

And yesterday, in a powerful and spontaneous post for the project, Nigar Hacizade, an Azerbaijani now living in Turkey, made an impassioned plea for peace.

I have no concrete answers, certainly not for this piece, but I will end with one thought. I know Armenians think about these questions just like we think about them. They think about peace, justice, their lands, and their legitimate grievances. Believe it or not, they think that they are in the right; isn’t that crazy? Well, it’s not. Neither are we crazy. It’s such a basic idea, yet such a hard nut to crack. But I believe it’s the key to get out of this windowless cell we have locked ourselves in.

I know there are Armenians who want the things that I want, and I know that we have no other choice but to find ourselves a middle ground. We don’t have to meet each other exactly in the middle; we just have to start walking towards each other. We have to do it for ourselves, for our legacy, for our collective dignity.

More of these alternative opinions can be read on the project site and also in the form of a free e-book in English and Russian for viewing online or download.

However, even so, with talk more and more of war, the situation does not look good. In Armenia, for example, some analysts expect nationalist rhetoric against a compromise peace deal to increase in the year leading up to the 2012 parliamentary elections while a new law under consideration in Azerbaijan would effectively make unauthorized cross-border cooperation with Armenian organizations and even media outlets a criminal offense. Indeed, in such an environment, perhaps the question is not if there will be a new war between Armenia and Azerbaijan over Nagorno Karabakh, but unfortunately more one of when.