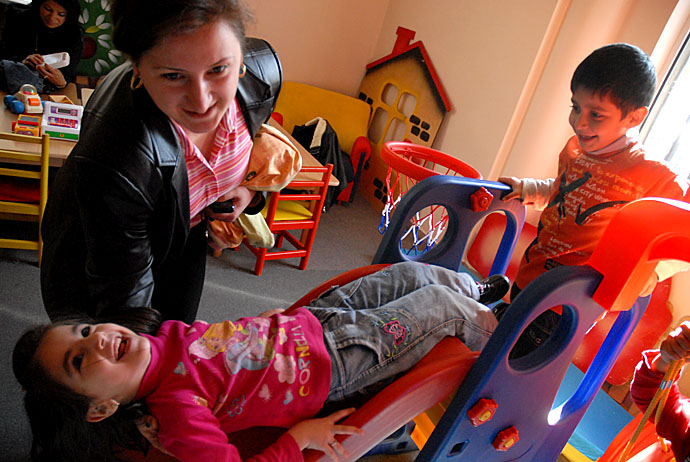 One subject that’s been a personal project over the past ten years of living and working in Armenia has been documenting the situation of socially vulnerable families, children deprived of parental care, and those with disabilities. In particular there is an urgent need to reduce the number of children residing in or attending specialized boarding schools as well as to integrate handicapped children into mainstream education.
It’s for that reason it’s likely I’ll be exhibiting photographs on this subject next year through the British Embassy and in cooperation with major players in this area such as World Vision and UNICEF. In the past, such children were hidden away at home or placed in institutions, but the real need is to implement a process of integration. In 2005 I wrote two articles on the work of local NGOs such as Bridge of Hope in this area.
While one article touched upon a specific case, another provided an overview of the organization and the situation in Armenia.

According to official statistics, there are over 8,000 children with disabilities living in the Republic of Armenia. In part the legacy of the soviet-era but also the result of the present socio-economic situation, many of these children have been isolated from society and are excluded from mainstream education.

"We are creating equal opportunities and access to education for children with disabilities," says Susanna Tadevosyan, President of the non governmental organization (NGO) Bridge of Hope. Established in 1996, the NGO continues to expand based on its experience to date and is implementing programs in nine different areas.

"My daughter was born with Cerebral Palsy," says one mother whose child has benefited from the work of the NGO. "Relatives tried to convince me that my daughter, Ashkhen, wasn’t normal and would destroy my life and that of my family. My husband abandoned me and I was left alone with my child."

Ashkhen grew up in isolation and was deprived of the opportunity to interact with other children until she was later enrolled into a specialized boarding school that offered only a watered-down curriculum for children with learning disabilities. Separated from her mother for most of the week, Ashkhen returned home on weekends. In 1996, however, when her mother heard about the Bridge of Hope NGO, Tatevik was eager to find out more.

Over the years, while still attending the specialized school, Tatevik says that Ashkhen developed quickly, becoming more communicable and confident. In 1999, at the age of 15, Bridge of Hope helped Ashkhen make the move to a regular school close to where she lives. She is now one of the most active and high-achieving children in her class and thanks to including both disabled and non-disabled children in the centers, stereotypes are being broken down.

As part of this project which will likely last until the spring, last month I paid a return to World Vision’s Malatia Child Development Center. Although World Vision came to Armenia in the aftermath of the 1988 Earthquake, the Center opened in 2002. However, the organization also works with socially vulnerable children and those with special needs in 17 community-based centers and 21 inclusive education kindergartens scattered throughout the country.
Last September, 71 children with special needs were thus able to enter the first year of school thanks to services delivered by the organization.

[…] They were treated by a speech therapist, an art therapist and a psychologist; participated in performances organized by World Vision. They learnt to communicate with other children, and were taught to read and write.

Tigran Tshorokhyan, World Vision’s Technical Support Team’s Child Protection Specialist, describes the Malatia center as just one part of the organization’s work in the area of child protection. The main objective is the provision of relevant services to children with special needs in order to integrate them into mainstream education whenever possible. It also serves as a resource center for the other community centers, 10 of which have been handed over to local government.

We also undertake our own awareness raising campaigns which offer the real possibility to change the mentality of society and to make it more inclusive when it comes to children, and especially those with learning disabilities or special needs.

Of course, with integration in mind, the center is not just for children with special needs. There are also clubs which not only offer services to children with disabilities, but also to those from the local community. The children are aged from 3 to 18 years of age and the majority is enrolled in mainstream schools. Amalia Martirossian, the center’s coordinator also says that it produces training and methodological materials for parents, teachers and children.

This is very important because these materials are in Armenian.

Next year the center will be transformed into a single legal entity and a foundation with a board of trustees although World Vision will provide financial assistance for the first year. Martirossian says that about 600 children have benefitted from services provided by the center although about 50 received long term assistance. Special development toys were also designed to assess and aid children with and without special needs at the center.

World Vision International Humanitarian organization with the funds raised by the Burns Committee in conjunction with the British Embassy presents a series of unique toys
designed by World Vision Armenia specialists for the physical and mental development and rehabilitation of children with special needs.

During the coming two months World Vision Armenia will distribute these toys to inclusive kindergartens, schools and other inclusive, special, rehabilitation facilities in Armenia.

Home visits by the center’s social worker, Anna Aslanian, are also part of its function. Living in the Malatia-Sebastia district of the capital, 12-year old Levon has Down’s Syndrome and does not attend school although his younger sister, Lusine, does. His parents have been absent and working in Europe for four years now so the two children are brought up by their grandmother. Aslanian will visit a special school and attempt to have him enrolled there.

Later, the social worker visits 14-year old Nareg as he recovers from a recent operation on his left leg in the hopes that he will later be able to walk without problems. The operation was made possible thanks to the support of a donor found by World Vision. Nareg’s mother abandoned him after he was born when it was obvious he was disabled. His father, however, refused to do so and brings up his son alone.
"He’s a very good man," says Aslanian who has also brought paper and pencils for Nareg to draw with while he recuperates. The adolescent is a remarkable artist for his age and it is not hard to imagine him working as an illustrator or animator in the future. "Our main goal, however," she explains, "is that Nareg will one day be able to walk unassisted."
And the work of the center is not just confined to World Vision’s own program. The organization has also made available its premises to another local NGO, Nrani, which works in the same area of children with special needs. The organization visits one of its beneficiaries in the Zeytun district of the city. Abandoned by his father, David, aged five, has cerebral palsy and his mother brings him up in the home which she shares with her mother and grandmother.
David’s musculoskeletal disorder is complicated by a deformed rib cage. Breathing is difficult, but his personality shines through. Attentive and aware of everything around him, the love between mother and child is unmistakable although she admits that even at his young age he is pleasantly becoming a ‘handful.’ "Even though he’s surrounded by women, he likes watching TV programs about cars," she says. "He likes all the things that most boys his age would."