In 2000, Srdja Popovic was one of the leaders of the Serbian nonviolent resistance group Otpor! that helped topple Slobodan Milošević. Then in 2003 he decided to use his experience to help pro-democracy activists around the world, teaching them how to bring down a dictator.

From the streets of Egypt to New York, Popovic teaches a toolkit of resistance, promoting the use of non-violence to achieve political and social goals.

In his new book, Blueprint for Revolution, Popovic documents his own journey from Belgrade rock kid to revolutionary leader, as well as sharing the stories of the many revolutionaries he has met along the way.

He will be joining us in conversation with Steve Crawshaw, director of the office of the secretary general at Amnesty International and co-author of Small Acts of Resistance, to share his story and the ingenious ways in which non-violent resistance has achieved its means around the world, from Occupy Wall Street to Tahrir Square, and from Nelson Mandela to Harvey Milk. 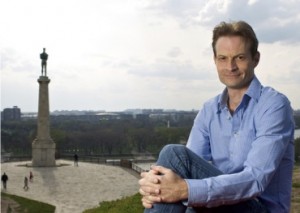 Srdja Popovic is a Serbian biologist, political activist and executive director of the Centre for Applied Nonviolent Action and Strategies (CANVAS). As the director of CANVAS, Popovic has consulted with revolutionary activists from countries including Egypt, Syria and Tunisia. The PRIO tipped him to receive the Nobel Peace Prize, Wired listed him as one of 50 people who will change the world and he was one of the World Economic Forum’s Young Global Leaders for 2013.