Insight with Samar Yazbek: My Journey to the Shattered Heart of Syria

Samar Yazbek was a well-known journalist, presenter on Syrian television and a celebrated novelist when she fell foul of the Assad regime, leaving her no choice but to flee. She was forced to watch from afar as a peaceful uprising turned into violent conflict and her country burned. 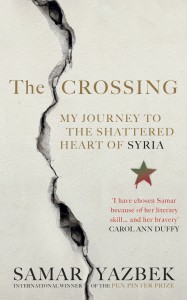 In the Summer of 2012 she squeezed through a gap in the fence on the Turkish border and found herself back in her homeland. This was the first of several dangerous clandestine trips to the North of the country, where she set about documenting the struggle of men, women and children simply trying to stay alive.

Weaving together stories of hardship and brutality with touches of humanity, her new book The Crossing is testimony to the appalling reality that is Syria today. She will be joining us in conversation with Syrian writer and broadcaster, Rana Kabbani, to share her observations and what she has heard from the Syrian people about their hopes and fears for the future.

Samar Yazbek studied Arabic literature before spending a decade as a journalist for various newspapers including Al-Hayat and presenting a cultural programme for Syrian television. In 2010, as a recognition of her fiction writing, the Hay Festival named her as one of the Beirut39, a group of Arab writers under the age of 40. Following the uprising against the Assad regime, Yazbek was forced into exile and now lives in Paris with her daughter.