Insight with Anabel Hernández: The Mexican Drug Lords and Their Godfathers

Anabel Hernández is one of Mexico’s leading investigative journalists. It was the kidnap and murder of her father and the subsequent refusal by the police to investigate unless her family paid a bribe that led her to journalism. She will be joining us in conversation with Ed Vulliamy, a writer for The Guardian and Observer, and author of Amexica: War Along the Borderline, to talk about the work she does recording and investigating the shocking brutality of narco violence and the complexity of the cartels, their rivalries and their links to government and business. 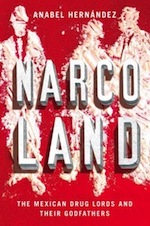 In Mexico officials put the number of deaths from narco violence at 70,000 in the last six years, with another 27,000 missing. In her new book Narcoland: The Mexican Drug Lords and Their God Fathers, Hernández explores how Mexico has become a base for the mega-cartels of Latin America, and the links between the cartels and government and business complicity at the very highest levels.

Anabel Hernández has worked on national daily newspapers including Reforma, Milenio, El Universal and its investigative supplement La Revista. She currently contributes to the online news site Reporte Indigo. Her previous books include La familia presidencial, Fin de fiesta en los pinos, and Los cómplices del presidente. In 2012, she was awarded the Golden Pen of Freedom by the World Association of Newspapers in recognition of her fearless work exposing drug cartels.